JERSEY Shore star Angelina Pivarnick has gotten a refresh of “filler and Botox” and showed off her new face in a series of social media snaps.

The day of pampering comes after the 35-year-old was hospitalized due to stress as she continues to be locked in a nasty divorce battle with her ex Chris Larangeira.

Angelina enjoyed some me time on Tuesday with a day of beauty procedures.

On her Instagram Story, she shared a snap of herself in a pair of tight leggings and a light blue crop top, getting ready to have some work done.

The Jersey Shore star posed in front of a mirror but used her phone to cover up her face, seemingly not wanting to show it until after she was finished.

“At my fave doctors office for some filler and Botox,” Angelina captioned the photo, which saw her standing in the procedure room, waiting for the beauty professional to arrive. 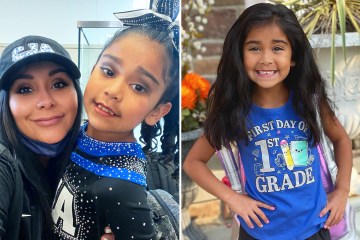 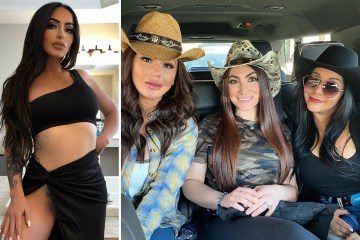 Later in the day, she flaunted her fresh, new face while out to eat with her niece, Aubree.

While still wearing her one-shoulder blue crop top, Angelina shared a video that gave fans an up-close look at the results of the procedures she’d had done.

The 35-year-old pursed her plump lips and wore her hair back to properly show off her smooth and youthful face.

For the outing, Angelina also had on some black eyeliner and thick mascara.

After the big reveal, she turned the camera toward her young nice, who was hanging out on the restaurant bench with her.

The little girl wore white leggings and a green top, and she smiled and fixed her hair a bit as her aunt recorded her.

When she saw that Angelina still had the camera pointed in her direction and was now zooming in and out, Aubree laughed and said: “I thought we were doing a picture!”

The reality star told her: “I changed my mind!”

Then she seemed to change it back, as the next Instagram post was a cute shot of the two of them together.

Angelina held her niece in a tight hug, with both of them giving big smiles for the camera.

This fun day out with family comes as Angelina has been having a hard time amid her divorce battle with her estranged husband Chris.

Earlier this month, she admitted to being hospitalized as the feud with him continues

She shared a video of herself laying in a hospital bed on her Instagram Story and panned the camera from one side of her bed to her face.

Angelina showed very little emotion as she caught up on rest and focused on her health.

In a second story, the Staten Island native gave an update on her current situation.

She wrote: “Immune systems been super low from all the stress I’ve endured the past couple of months.”

Angelina went on: “I wish this pain on no one in this entire world. I hope this too shall pass and I hope brighter days are ahead of me.

“Stress is definitely a killer. No one lives in my bones and can understand the amount of pain I’ve endured lately.”

She concluded: “God has me that’s all that matters. There’s a light at the end of the tunnel.

“Soon enough I will see the light. I’m just waiting to see it. I have been keeping prayers and god closer than ever and I know he’s got big plans for me.”

She showed off her plump lips while posing in a cute snap with her niece, Aubree[/caption] Angelina’s day of pampering came as she continues to be locked in a nasty divorce battle with her ex Chris Larangeira[/caption]