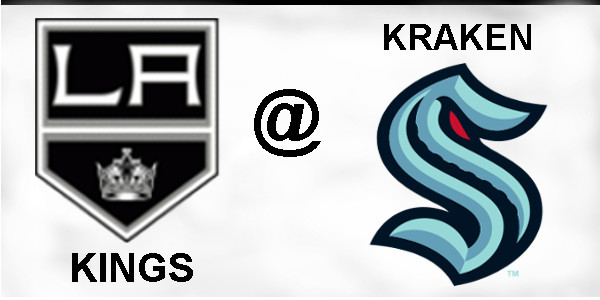 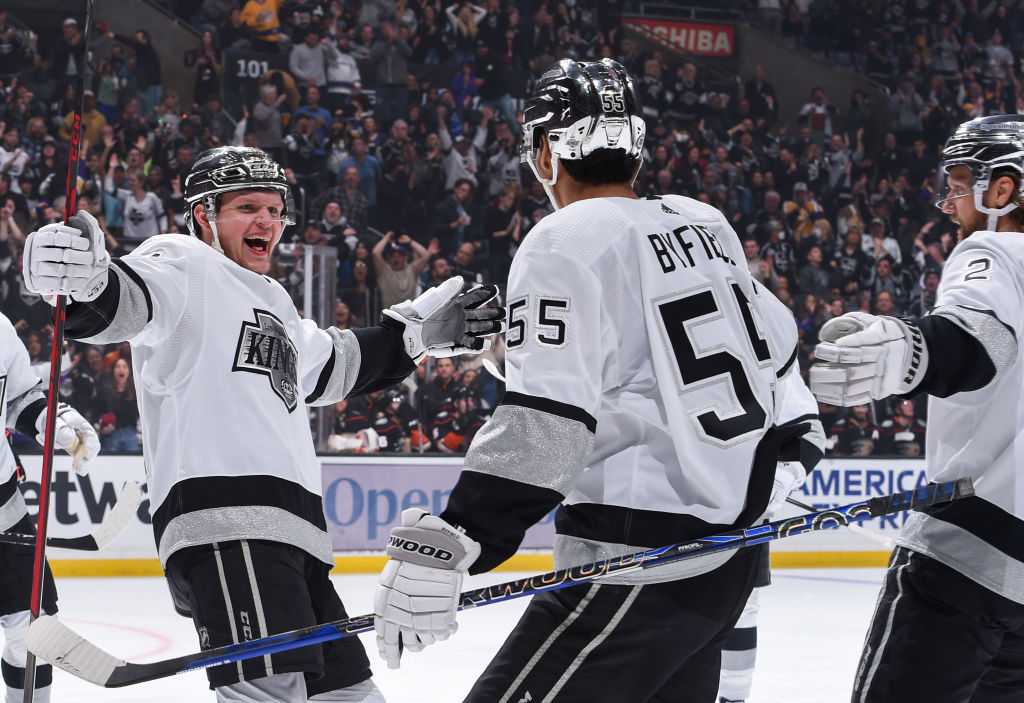 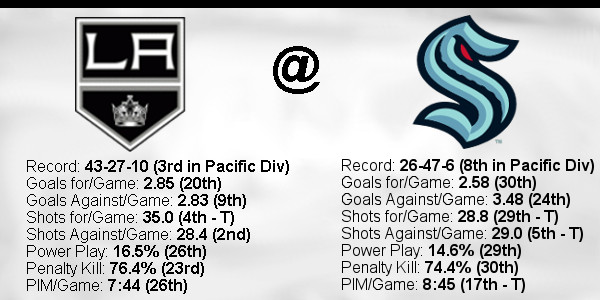 Please remember, DO NOT post links to Live Game Streams in the GDT or anywhere else on LGK


Matt Roy
On being one win away from clinching a playoff spot
Weve kind of felt that way for a few weeks now. Every game has been a huge game for us, its just kind of felt like that, one game, lets just get that one game. Weve been chipping away and its nice to be in that spot.
On both he and Edler chipping in with goals tonight in a big win
Yeah, definitely. Its something weve been trying to do all year, havent been doing a great job at it. Those are two pretty big goals tonight, so were pretty happy with it.
On his goal and how the play developed
I think I was in the neutral zone, I saw a passing lane and he gave it to me nice and soft. I was able to step into [the shot] and luckily it missed the guy in front of me and snuck through.

Quinton Byfield
On being one win away from clinching a playoff spot
Its definitely amazing, weve worked all year for this and were where we want to be. Win and you get in. You dont want to leave it up to anyone else, its a great feeling in the locker room. A lot of guys havent been there and I think it would be a great experience and we have a lot of veterans as well, who are going to show us the way.
On his line tonight with Kaliyev and Grundstrom
I think Carl, he has a lot of skill and he works super hard, hes always finishing hits, hes always getting in there. Arty, he has a crazy shot and hes always making plays. Im just trying to read off of those two guys. Last year in Ontario, me and Arty played a lot together, so theres definitely some chemistry as well.
On what hes learned from his time out of the lineup as a scratch
Ive learned a lot. You cant take anything for granted, you have to play every game like its your last, like you dont know if youre going to be in the lineup. Make it hard on them to take you out. I think thats the mentality Im going with now, I just want to show what I can do and make plays out there, remember that hockey is fun.
On growing up watching Ryan Getzlaf play and if he got the chance to say anything to him
I didnt get to actually, I dont think I took a faceoff against him. My first game when I was called up last year, my first draw was against him. He welcomed me to the league, he was very kind there. I wish I had the opportunity to say something to him, even after the game we were kicked out, but I definitely would have said something. Hes had a hell of a career, Hall of Famer. I wish I could have played against him more, I have a lot to learn off of him.

Todd McLellan
On being at the one-yard line, one win away from the playoffs
It feels like were getting closewho was that football team though that was at the one-yard line and threw an interception. Seattle? No, were getting close. Again, its the same thing, weve maintained control of our position, we want to continue to do that through Thursday.
On the teams bounce back to the second goal allowed
[It was] big. The way the goal happened, obviously a freak bounce and the way Quickie has played for us, maybe its better that it went in that way than a real good play, because the guys buckled down and wanted to play for him. Its a sign of a good team and of guys playing for one another.
On getting two goals from defensemen tonight
Our D has been in such a flux throughout the whole year and when you look collectively at the production of all 12 or 12, however many weve used, it hasnt been that bad. We dont have that one guy, I think Drew is still leading us in scoring when it comes to defensemen, and Durzi, and neither of them have played the full year, but they provide offense for us. Theyve been able to sustain plays, use their shots from the blueline, as we saw today. Tonight, Edler and Roy, good to see for those two, because theyve had some tough minutes lately against some tough players, more in a checking role, a shutdown role. To see them contribute is a real good thing, and Byfield winning the faceoff, weve stressed certain areas for him and that was one area he excelled in, in that moment. He can do it.
On the performance of the fourth line tonight
Ive liked their last six periods, theyve been a factor in the games. They have physicality, theres pace, theres some size, puck movement and goals. All while being fairly responsible, their checking skills were pretty good, its a good look right now.
On Ryan Getzlaf and his final game against the Kings
You know what, its almost appropriate, he came into the league competing like that. Hes not out yet, but were done with him and in some sense thats a good thing, because hes a nemesis to our club here, but well also miss him, because he does a lot for the game and the game in Southern California in particular. To have that in a rival, I thought it was appropriate that Quickie, Kopi and Brownie had their moments with Getzy because theyve been going at it for a lot of years. 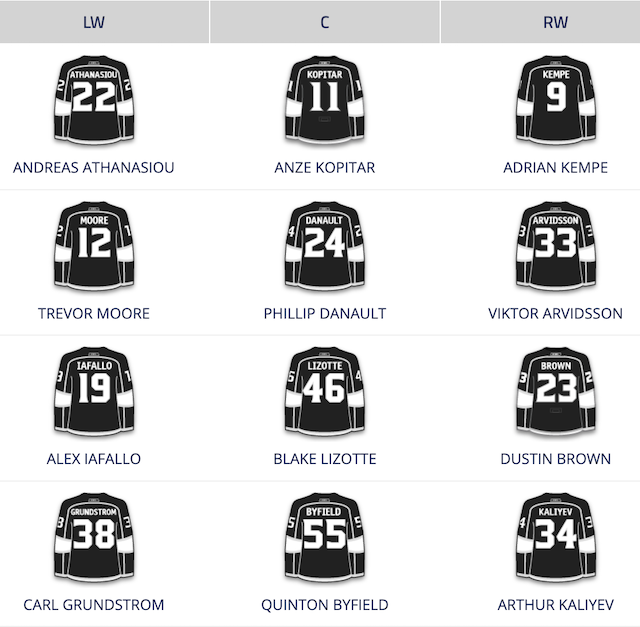 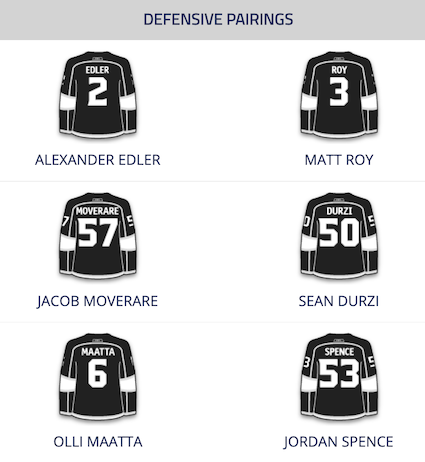 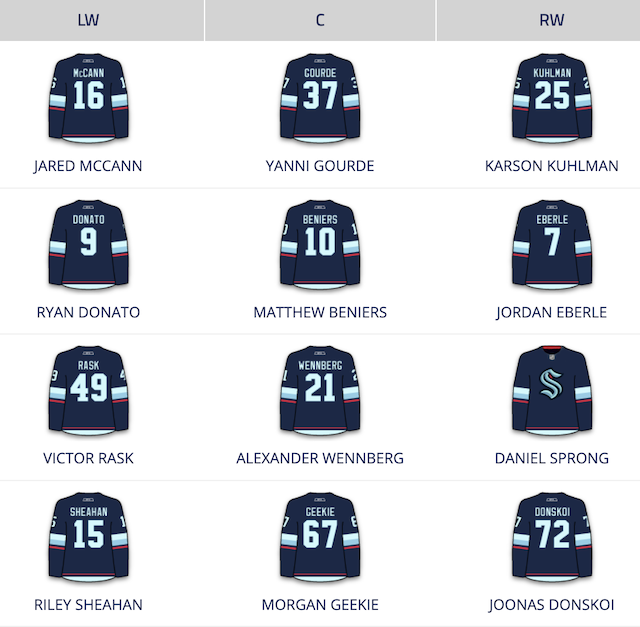 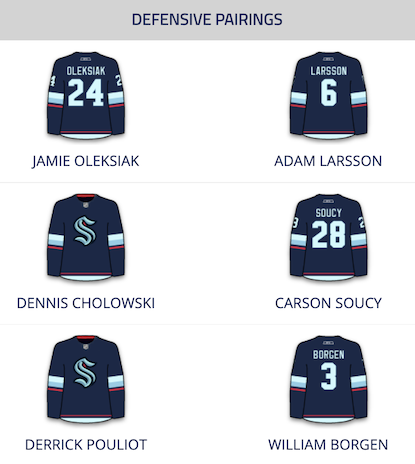 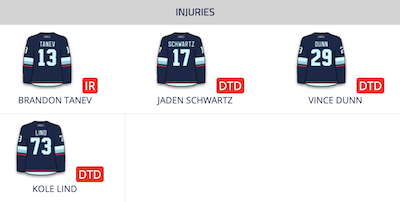 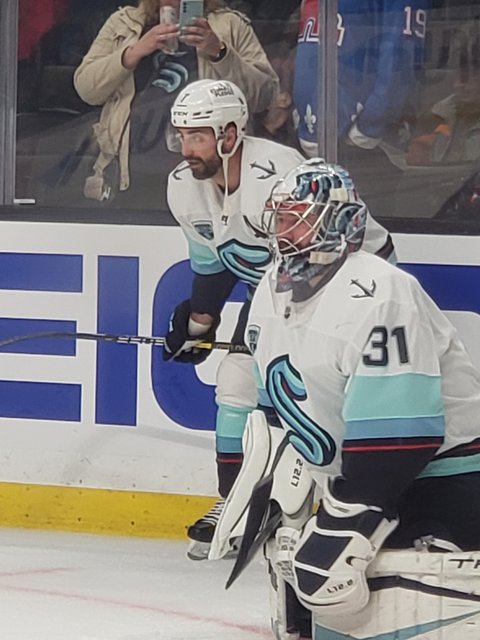 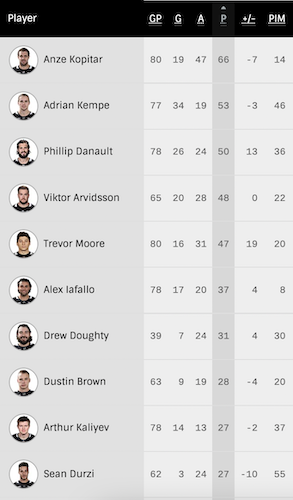 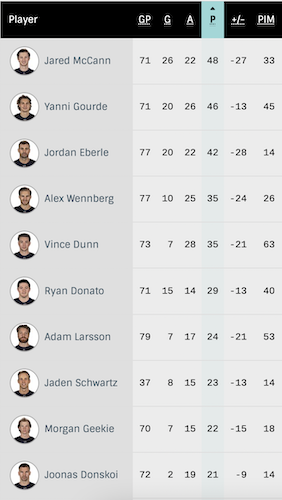 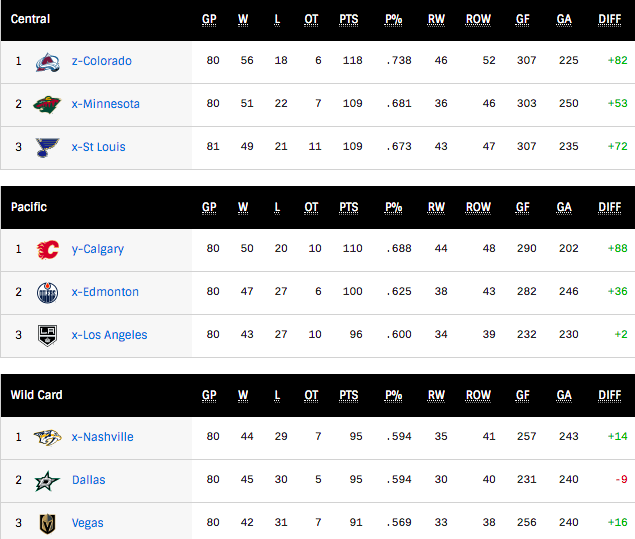 Thanks to everyone who has played the poll game this season! I hope you had fun chasing srm1105. These will be the final questions of the season. Extra-special thanks to jammer06 for totaling up all the winners after every game.

The Kraken and Kings are both very good at limiting shots-against.

Part 3 - What will be the final score of the game? Only the numbers - doesnt matter which team wins or loses.

(so max of 8 points available)

Here are the many, many guessers who knew that Getzlaf would only score 1 point in his final 2 games against the Kings (this was from our 1st game against Anaheim last week):

And congratulations to these two people who had faith in Alex Iafallo to score the final Kings goal of the home season (ok, so no one guessed that one) and/or that he would score the final goal by anyone in Crypto.com Arena with Ryan Getzlaf also playing:

Last Kings goal of the season at home:
Nobody

Last goal with Getzlaf in the building:

Im giving you each 2 points, just because

King Of The Mountain
with 65 points: 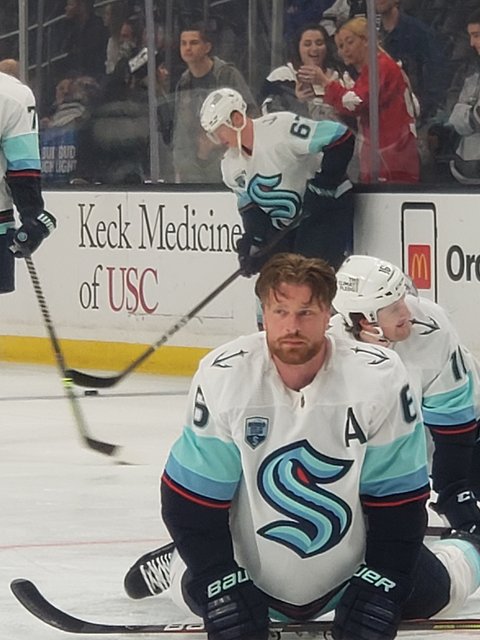 Will caller ID apps bite the dust in India soon?