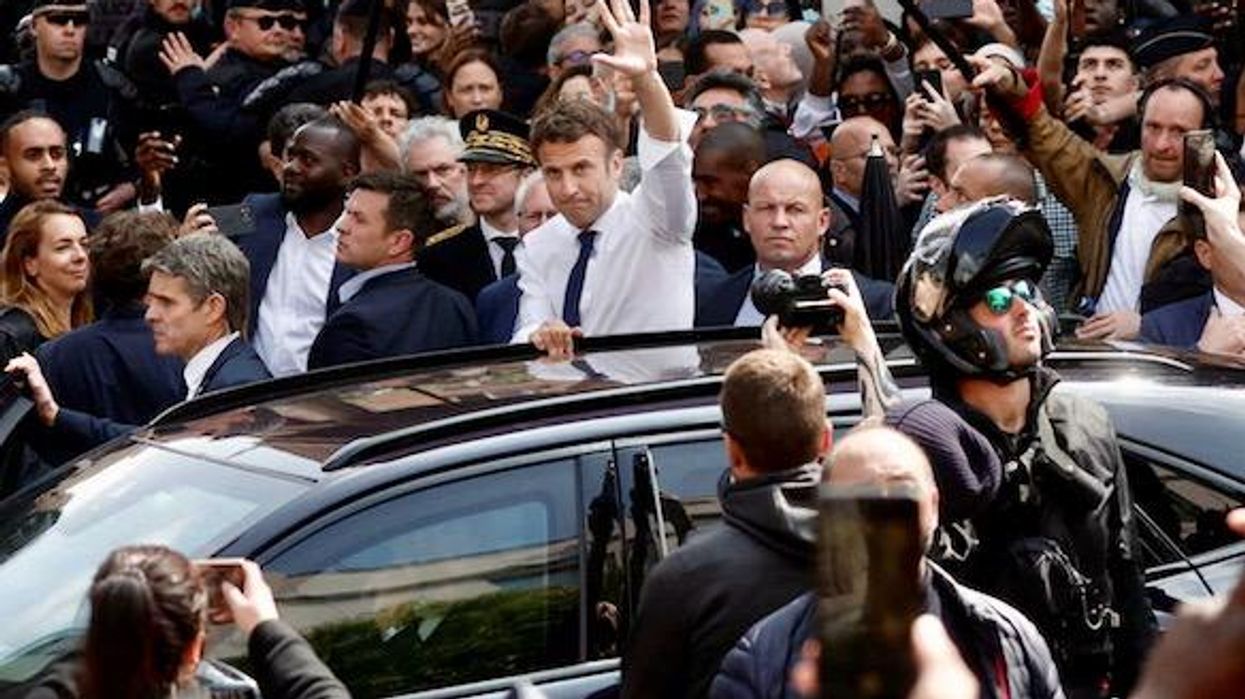 French President Emmanuel Macron was the target Wednesday of a bunch of tomatoes hurled by a disgruntled onlooker as he made his first public appearance after his weekend re-election victory.

Macron has spent the last days secluded in an out-of-town residence and then the Elysee Palace, considering the formation of a new government following his defeat of far-right leader Marine Le Pen on Sunday.

But reflecting his promise of uniting a divided France, he chose for his first post-election visit the French town of Cergy-Pointoise in the Paris suburbs, a low-income area where far-left candidate Jean-Luc Melenchon came out on top in the first round of voting on April 10.

Macron was meeting residents when a bunch of cherry tomatoes whizzed by close to his face, missing him but hitting bystanders.

His security detail moved swiftly, shouting "projectile! projectile!" and covering Macron's head with their hands before protecting him with a black umbrella.

Macron appeared unflustered but keen to move on as rapidly as possible. "No! No! No fighting," he could be heard saying.

While the incident was minor, it was a reminder of the challenges of fully protecting a president who is fond of immersing himself into crowds even in areas that can be hostile to him.

In June 2021, he was slapped in the face by a man while greeting locals on another trip.

Elysee officials emphasized that the visit to Cergy-Pointoise had been marked by a good atmosphere, with an intense crush caused by people trying to get as close as possible to the president.

"In the poorest neighborhoods, whether in cities or rural areas, we really need to create the conditions for real and effective equality of opportunity," Macron said during the visit.

"It is the only way to get rid of this distrust... and sense of abandonment," he said.

France's Constitutional Council is due to certify the results of the election later Wednesday, paving the way for Macron's second term to start next month.

With an eye on parliament elections in June, Macron is expected in the coming days to name a new prime minister and government but has offered few clues on who he may be considering.

"I will appoint someone who is committed to social and environmental issues and is productive," he said as speculation whirls that a woman could head the government for the first time since Edith Cresson in 1991.

Who was cyclist Moriah Wilson?

‘Love According to Dalva’: Tale of recovery from child abuse shines a bright light at Cannes