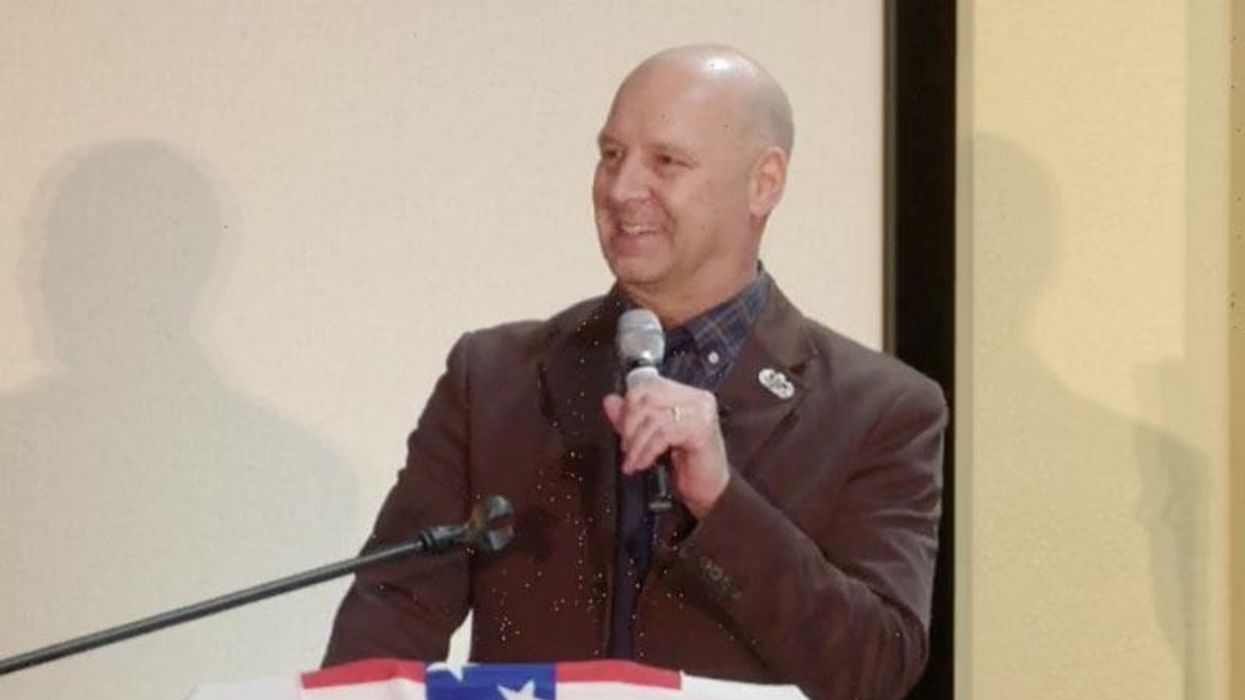 A top-tier Republican candidate for Pennsylvania governor, among other GOP luminaries, put in an appearance at an event in Gettysburg last weekend that promoted QAnon and conspiracy theories about the Sept. 11, 2001 attacks, according to published reports.

The candidate, state Sen. Doug Mastriano, attended the conference called “Patriots Arise for God and Country,” according to Right Wing Watch, a website that monitors the far right.

The conference was organized by far-right activists Alan and Francine Fosdick, who have prompted QAnon conspiracy theories, according to RightWingWatch. The conference included the screening of a video claiming that the country is experiencing a “great awakening” that will expose “ritual child sacrifice” and a “global satanic blood cult,” the Inquirer reported.

Once part of the GOP fringe, QAnon adherents have become an increasingly mainstream part of the Republican base. They claim among other things, that “a group of Satan-worshiping elites who run a child sex ring are trying to control our politics and media,” the New York Times reported last September. Adherents rallied around former President Donald Trump, whom they believed was going to save the country from that cabal of elites and Democrats.

Mastriano, R-Franklin, who has consistently led polls of the crowded Republican primary field, raised money at the event, the Inquirer reported. Organizers reportedly auctioned off a portrait of Trump for $4,000, with the proceeds benefiting Mastriano, the newspaper reported.

According to Right Wing Watch, co-organizer Francine Fosdick held a sit-down with QAnon conspiracy theorist Sheila Holm, where they discussed how “the government worships Lucifer and is controlled by “The Order of Paladin,” “The Wiccan Order of Knighthood,” and the New World Order,” Right Wing Watch reported.

During his appearance on Saturday, Daniels “complained that he often gets accused of being ‘uncivil,’ but he defended himself by insisting that the right can only be civil with the left once ‘we beat the crap out of them’: “We will be civil on our terms, not theirs,’” according to Right Wing Watch.

Mastriano, who has been vocal about his own Christian beliefs, told the audience on Saturday that he’ll win this November’s general election because “my God will make it so” and vowing to boost energy production to make the state more competitive.

“It’s gonna be beautiful,” Mastriano said. “Pennsylvania will be the freest, most hopeful, most constitutionally based state in the nation. People are gonna want to move here — and Maryland as well — … You think Florida looks good, it’s going to be amateur hour.

Mastriano, who was subpoenaed by the U.S. House committee investigating the Jan. 6 insurrection, said he regards the summons as a “badge of honor,” the Inquirer reports. Mastriano was at the Capitol on Jan. 6, but has denied participating. Video, however, apparently shows him closer to the building than he claimed.