When you think of Princess Diana’s legacy and lasting global impact, a number of epitaphs come to mind. The late Princess of Wales was dubbed “The People’s Princess” following her tragic death; she also memorably uttered how she’d like to be remembered as the “queen of people’s hearts” during her shocking 1995 interview with the BBC. Her celebrity status, along with her dedication to service, spoke volumes. But her role as a fashion icon remains one of Princess Diana’s most widely discussed — and agreed upon — places in history. And longtime fashion collector and quasi-historian Pat Kerr Tigrett knows that all too well.

Kerr Tigrett is the protector and purveyor of such delicate ephemera as textiles, laces, and more pieces dating back to the 16th century. Among her collection, Kerr Tigrett is the proud preserver of four of Princess Diana’s gowns, which she bought at the 1997 charity auction at Christie’s in New York City. Princess Diana did not attend the auction herself (though the late Princess of Wales did get a peek at the dresses on display before her tragic death in August of that year). 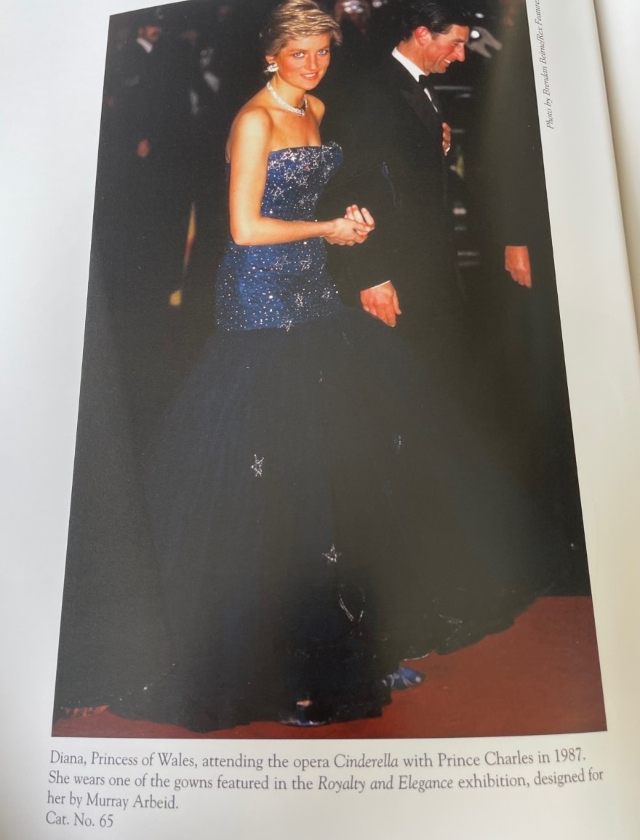 Princess Diana in a gown designed by Murray Arbeid, purchased by Pat Kerr Tigrett at the 1997 Christie’s auction in New York City

In total, the late Princess of Wales offered 79 of her gowns and formal dresses up for bid. According to the New York Times, some of the most expensive dresses, including a white chiffon dress with a handkerchief hemline by designer Gina Fratini, were sold for upwards of $75,000 — sometimes more. The famous gown Diana wore to the White House in 1985, where she danced with John Travolta, sold for six figures, breaking a Christie’s record. The Victor Edelstein-designed gown was purchased for a whopping $290,000 — the most expensive at the auction. Another of the most expensive dresses at the Christie’s auction was a beaded Catherine Walker gown with a bolero that went for $151,000. This gown is also known as Princess Diana’s “Elvis” dress and, per Vogue, is embroidered with some 20,000 beads. The Catherine Walker gown and cropped jacket were Diana’s pearly tribute to The King.

“Whenever I saw the princess in this dress, I could not help but feel that it would not be possible for anyone else ever to wear this dress and bolero,” reflected Walker years later, according to the outlet. “She shone in the dress and the dress shone around her in a shimmering column of glistening pearls.” The princess first wore the design to an official outing in Hong Kong in 1989 and again at the Fashion Awards the same year (pictured below).

Collector Kerr Tigrett was fortunate enough to be among the throngs of eager attendees that June day in 1997. The four Princess Diana dresses she purchased she described as “long dinner dresses or formal gowns.” One of the four dresses is a “tiered Goya-esque Spanish dinner dress with three tiers of black lace,” designed by Victor Edelstein, which Diana wore for a 1987 banquet in Hamburg, Germany, and again to Festival Hall in London the same year, per Everything Royal. 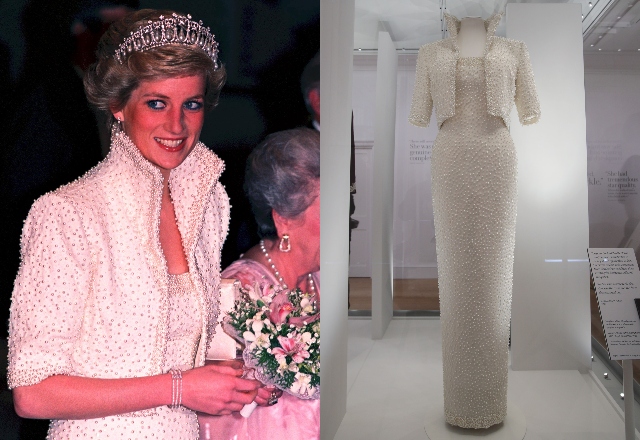 LEFT: Princess Diana on tour in Hong Kong in 1989 RIGHT: The Catherine Walker dress and bolero she wore

Two of the gowns were made by one of Diana’s favorite designers, Catherine Walker — who also happens to be a favorite designer of Kate Middleton. Those two dresses featured a “black velvet long Romantic Victorian Revival dinner dress with lace collar and beading, which, according to Everything Royal, was never worn in public. The other Catherine Walker design Kerr Tigrett describes as a “formal dinner dress of creme silk with falconry features as if flying formation” (pictured below) which was worn during a visit to Saudi Arabia. The final dress in Kerr Tigrett’s collection is a “strapless ballerina-length dance dress with diamanté stars,” designed by Murray Arbeid. Diana wore the gown to a performance of The Phantom of the Opera in London. 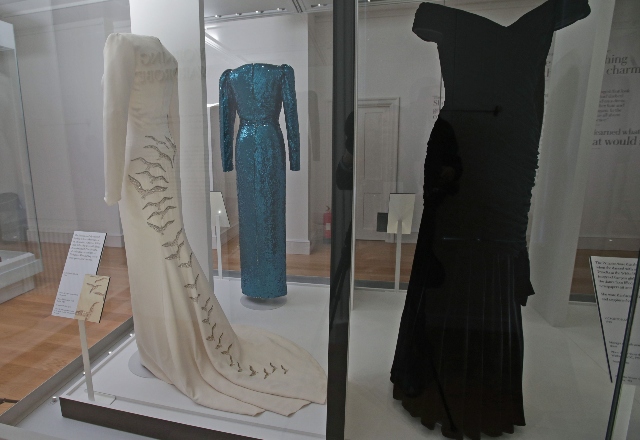 Cream silk embroidered with gold falcons on the bodice, designed by Catherine Walker. Diana wore this on a visit to Saudi Arabia. $35,650.00. The dress was purchased by Pat Kerr Tigrett.

When it comes to her own perspective on Diana’s style, Kerr Tigrett shared with SheKnows the particular quality that’s made Diana’s style stand the test of time. “She was real,” Kerr Tigrett says of the late Princess of Wales. “There was no pretense. She covered a lot of heartache also, which is really coming out more and more to the public now. I think it makes everybody love her more.”

Kerr Tigrett describes the dresses and Diana’s enduring style as nothing short of “timeless.” And from a woman whose collection includes pieces dating back hundreds of years, that’s a true testament to the way in which Diana’s own sensibility merged flair for the contemporary with a touch of tradition. In Kerr Tigrett’s collections and so many others, Diana’s legendary wardrobe — and lifetime of memories — will live on.

Before you go, click here to see the best photos from Prince Charles and Princess Diana’s marriage.