Early success can be a blessing and a curse. Most child actors hoping to transition to more mature roles face an uphill battle, and it can be hard to coax audiences out of the cognitive dissonance of seeing established baby-faced performers as fully fledged adults.

Fortunately, “Moana” star Auli’i Cravalho, who voiced the titular role in the mega-hit Disney musical, doesn’t have that problem — though she may need a little help reminding people who she is. She’s not worried, though. Still, fans of the fearless Hawaiian princess may be surprised by her latest big on-camera role: a scrappy tomboy who rides a skateboard in Hulu’s new queer rom-com “Crush.”

Led by an all LGBTQ creative team that consists of writers Kirsten King and Casey Rackham and director Sammi Cohen, “Crush” is a charming queer rom-com for the Disney Channel generation. The movie stars “Girl Meets World” lead Rowan Blanchard as Paige, an aspiring artist who has nursed a crush on the same girl since fifth grade. In her quest to woo the popular girl, Paige completely overlooks her twin sister AJ (Cravalho), an unassuming loner who exudes a quiet confidence.

“I got to learn from AJ, and I got to put myself in her shoes. But she’s also come out already, she is bi, that’s just who she is,” said Cravalho during a recent video interview with IndieWire. “I learned how to skateboard and I fell down a lot, and that hurt my pride. But for AJ, that’s just … she gets up again and that was important for me to learn. So I learned a lot from her.”

Cravalho came out as bisexual on TikTok two years ago, during the early days of quarantine in April 2020. For the most part, her fans embraced her. Blanchard came out as queer in 2016, when she was just 14 years old and already in the spotlight.

In many ways, these actresses represent the best of Gen Z and how its “no labels” fluidity is disrupting the status quo — even in stuffy old traditional Hollywood. 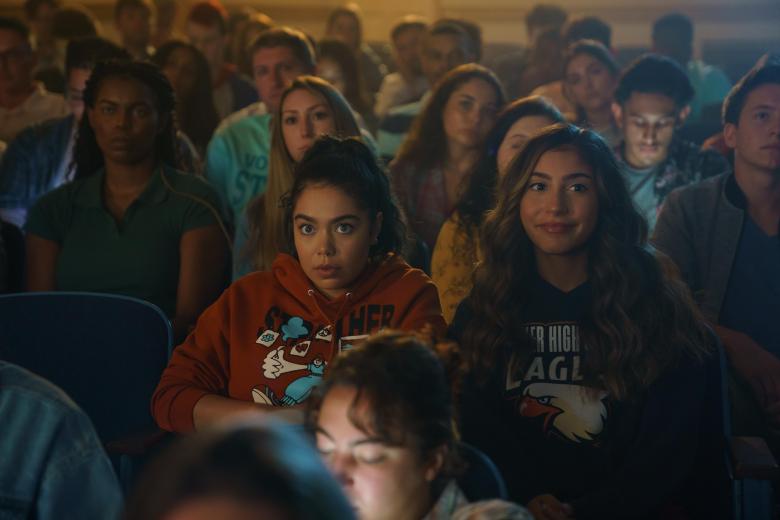 “The Gen Z humor is sharp and you either get it or you don’t. And it’s hard to write for Gen Z if you’re not on TikTok, or you’re not on Instagram, or you’re not listening,” said Cravalho. “I remember reading the script for the first time and being like, ‘This is really sweet, and the humor is on the nose and kind of edgy.’ And I also loved that while being a young teen queer rom-com, it also did not center around a coming out story, because I’ve seen that.”

It was also important to her that most of the creative team identified as queer, as well as her co-star.

“Suddenly it made sense like, ‘Oh, this is why the script is written so vibrantly.’ It’s because we’re represented behind the camera as well as in front of it, and I felt that when reading the script,” she said. “It makes or breaks the movie because … we’re putting on screen an experience that can’t be fudged.”

She added, “That’s why it’s also important to have actors who are queer, because if it was our first time kissing girls on screen, it probably wouldn’t have worked out. It would’ve been a completely different film if one of us wasn’t queer, and hadn’t had the experience of kissing another girl before.”

Though this is hardly Cravalho’s first on-screen role, it’s certainly her most naturalistic. She played Ariel in ABC’s 2019 broadcast “The Little Mermaid Live!” and had a series lead in the high school theater drama “Rise.” Soon, she’ll be seen in the TV series “The Power” (based on the novel of the same name) and she’s long been attached as the lead in a potential “Spring Awakening” feature.

But “Crush” marks her first foray into indie film, and it presented challenges away from the glitz and glam of musical theater and network television. 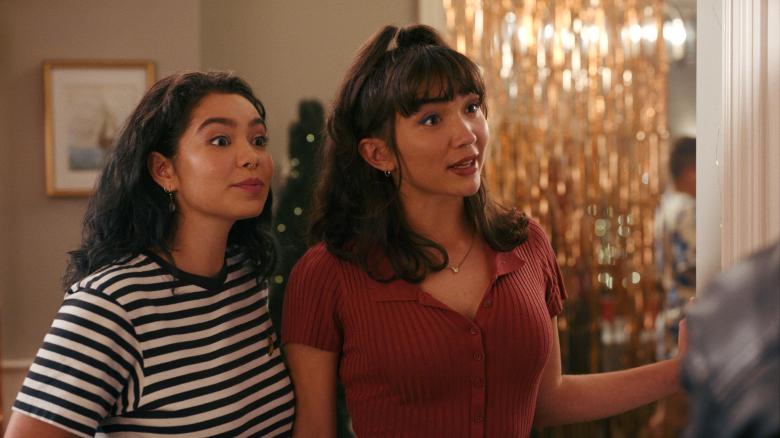 “It was really scary, to be honest,” she said of taking on a more naturalistic role. “Even not wearing a lot of makeup, or being on the track team and actually running. These are all very physical attributes of AJ. … Yeah, I was nervous. I had to practice running because I wasn’t great at it. But it’s also really freeing because this is who I am, this is what my body looks like, my boobs move when I run, that’s just what happens. It was different, but I’m always trying to play characters and women that teach me something.”

That overriding philosophy has been all she’s needed to guide her post-“Moana” career choices so far. Cravalho insists she doesn’t think strategically about her career, and doesn’t seem too concerned with moving out of the colorful shadow of “Moana.”

“To be honest, I haven’t really thought about other people’s opinions on my roles. I hope to keep it that way because I’m becoming proud of the work that I do, and that feeling is separate from anyone else’s take on my work,” she said. “My only requirement for looking at roles is simply, do I have lines of dialogue? Do I have enough of them? Am I intelligent? Am I written through the eyes of a man? Am I playing something up, like a part of myself that isn’t really an essential part of my identity? Am I eye candy? I just want to play smart women.”

“Crush” will be available to stream on Hulu on Friday, April 29.