CARLO ANCELOTTI revealed his Real Madrid side went rogue during their seven-goal thriller against Manchester City in the Champions League.

Ancelotti’s troops lost 4-3 to City in the competition’s semi-final first-leg.

But the Italian admitted that it was never the plan for his troops to participate in a goal-fest.

In fact, Ancelotti wanted his side to produce a robust defensive performance at the Etihad.

When asked if Real’s game plan was to attack, the 62-year-old was reported by The Mirror as saying: “Not really, no [the plan] wasn’t to attack gung-ho.

“The plan was to defend better. We started really badly and conceded two goals really early. 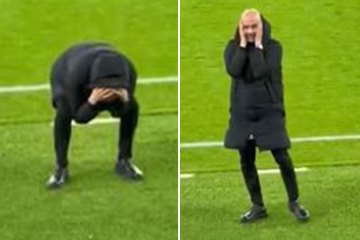 “But then we were able to react and we reacted really well. We stayed in the game and we are staying in this round. We have a home game and our supporters could help us.”

However, Ancelotti’s strategy went out the window when Kevin De Bruyne scored the first goal for Man City after just 93 seconds.

Real spent the rest of the game chasing City and were on the brink of a 4-2 loss before Karim Benzema’s late Panenka penalty kept them in the tie.

Ancelotti wasn’t amused by what he witnessed and claimed the strikers from both teams had a better game than the defenders.

The Italian added: “It was easy to read this game, for sure. We have to defend better. [Pep] Guardiola can say the same. The strikers had a better game than the defenders.”

But the former Everton boss is hoping for a better showing from the La Liga titans when the teams meet again at the Bernabeu for the second leg.

Ancelotti concluded: “Manchester City has the advantage, they have one more goal. But I think at the Bernabeu everything is open.”