KOURTNEY Kardashian fans think she has dropped a major clue about what she’ll wear to her first Met Gala with fiance Travis Barker.

The couple was spotted in Milan Italy recently.

A fan posted a Tiktok yesterday which showed Kourtney and Travis walking down the streets of Milan.

“When you accidentally met Kourtney Kardashian and Travis Barker in Milan,” she captioned the video.

The fan walked down the street throwing her hair behind her in a red coat and white shirt.

She put her hand over the camera and then added footage of Kravis. 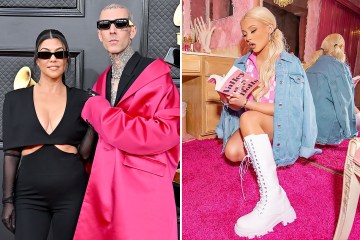 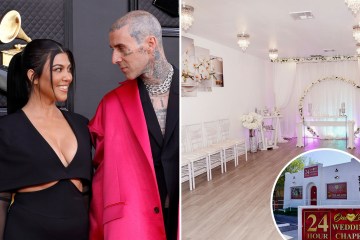 They were being filmed walking in Italy, holding hands, and wearing head to toe black.

A professional camera was following them as they walked and a security guard was in tune with their every step.

Onlookers picked their heads up as the couple walked by.

A Reddit user posted the video with the caption, “Kravis in Milan.”

While some fans pointed out that the fan didn’t actually “meet” the couple, but rather “saw” them, others picked up on a different detail.

Going off of the “met” detail, Kardashian fans believe that they are in Italy for their Met Gala outfits.

“Incoming ill-fitted D&G gown for the met gala,” one fan wrote to which another fan replied “OMG. Good point!”

“Dolce & Gabanna for their MET debut?” asked another fan.

Dolce & Gabbana is an Italy designer, so it would make sense why they would be in Italy just days before the gala.

The couple seems to be having a good time in Milan.

Travis sparked wedding rumors after he posted a photo of a church.

The Blink-182 drummer showed off the ornately decorated ceiling and high windows inside the church.

He stood in the middle of the aisle to take the snap, with rows of empty pews on either side of him.

Travis kept fans guessing after he posted the picture without a caption.

Kourtney and Travis got married at a Las Vegas chapel earlier this month without a marriage license – leaving fans wondering when they will have an official ceremony.

The reality star later admitted they are not yet legally married as they couldn’t get a marriage license at that time in the morning.

KOURT NOT IN COURT

Fans on that Reddit thread also pointed out that while she and Travis are living it up in Italy, her sisters and mom are in the middle of a court battle.

“Love how she’s living her best-unbothered life while her sisters fight it out in court,” wrote one fan.

Blac Chyna is suing the family because she believes they cost her money after her reality show, Rob & Chyna, was canceled.

The lawsuit stretches back to 2017 but is only now being taken to court.

The case will determine if there is rightful cause for Chyna to receive a pay-out for the missed opportunity of a season two of her show.

Chyna was previously engaged to Rob Kardashian and they have one daughter together named Dream.

Season 2 was being filmed but then the pair broke up.

Now, Chyna is suing the family for $100 million, claiming that they ruined her TV career.

When Kourtney and Travis attend the Met Gala, it will be the first time they walk that red carpet.

She has never attended the event, unlike her sisters.

The 43-year-old did receive an invite to the event in 2019 but did not attend to support Khloe.

Khloe was reportedly “banned from the list” for being too “C-list.”

Kourtney decided to stay home with her sister that year so she didn’t feel left out.

The Met Gala is set to take place this Monday, May 2 in New York.

This year’s theme is Gilded Glamour, which will draw inspiration from the Gilded Age in American history.