The United pair tried in vain to block Nketiah in the Gunners’ 3-1 win on Saturday.

The hapless duo attempted to sandwich the Arsenal striker during the Premier League clash.

Sancho inched in from the left, and Telles encroached on Nketiah from the right.

But when the sharp Nketiah realised what was going on – he simply side-stepped the United stars.

Sancho and Telles were left looking bemused as the 22-year-old left them in his dust. 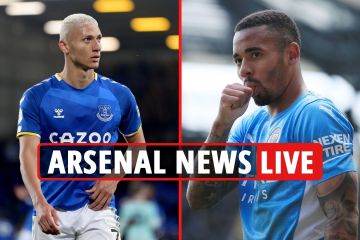 The hilarious exchange was captured on Twitter by a fan who labelled the clip: “Some Looney Tunes defending”.

It was a view echoed throughout the thread by users who were amused by the snippet.

Another fan interjected: “This legit looks like a clip from a comedy show.”

And a third added: “A combined nuisance.”

It was one out of a series of gaffes by Telles throughout the game.

The Brazilian left-back was left with egg on his face once again when Bukayo Saka got the better of him.

The rivals’ battle for the ball on the wing ended up with Telles getting nudged to the floor by Saka.