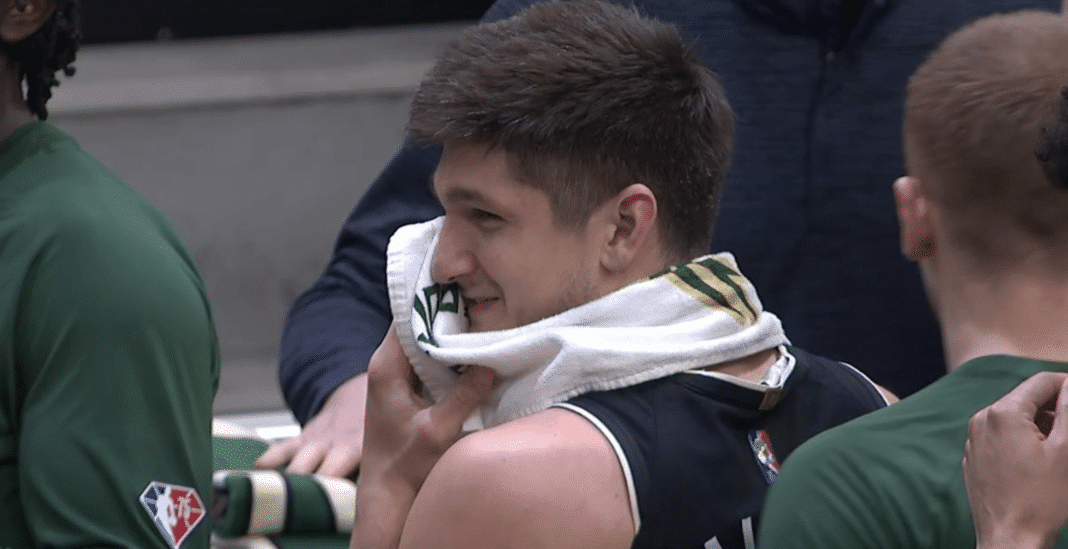 On Sunday afternoon ESPN’s Adrain Wojnarowski announced that the NBA is suspending Grayson Allen one game for his flagrant 2 foul on Alex Caruso.

Allen grabbed Caruso while he was in mid-air and threw him to the ground to prevent a lay-up. Caruso landed awkwardly and his head appeared to bounce off the hardwood.

He was able to stay in the game but afterward, he was diagnosed with a fractured right wrist that will require surgery. He will be reevaluated in 6-8 weeks.

The punishment seems light for multiple reasons. For starters, the play easily could have ended Caruso’s career. The Bulls guard had no control of his body while he was in mid-air.

“For Alex to be in the air and to take him down like that, he could’ve ended his career. And he has a history of this. That to me was really dangerous. I hope the league takes a hard look at something like that because that could have really, really seriously hurt him.”

Caruso did not give Allen the benefit of the doubt either.

“Dude just grabbed me out of the air,” Caruso told ESPN. “It’s kind of bullshit. I don’t know what else you can do about it.”

The Bull’s reactions tell you everything you need to know.

So does Grayson Allen’s reaction.

This smirk tells you all you need to know about Grayson Allen. Once a punk, always a punk, and for Budenholzer to defend his actions speaks volumes for that franchise, IMO. pic.twitter.com/O28EA0Dv8M

Allen could be seen smirking on the bench while referees reviewed the play like a psychopath. Caruso was asked if Allen checked on him to see if he was okay after the foul. Allen did not. This is nothing new for the former Duke Blue Devil.

Alex Caruso, asked if Grayson Allen came over to check on him after taking him out: “No.”

While at Duke there have been multiple instances of Allen throwing cheap shots, shoving opponents from behind, and intentionally tripping players. During his second season with the Memphis Grizzlies, he took back-to-back flagrant fouls and was ejected from a Summer League game.

Earlier this season Derrick Rose blew past him on a drive so Allen stuck out his right foot and tried to clip rose as he went up for a layup. Fortunately, he missed but the intention was there.

His most recent offense will have a major impact on the Bull’s season moving forward. Caruso had just come off the injured list and was making his second appearance back in the lineup.

What Caruso provides the Bulls is irreplaceable. On top of his much-needed premier defense and scoring off the bench he has winning intangibles. He was one of the few players LeBron James trusted on the floor in the fourth quarter during the Lakers 2020 NBA Championship run.

He had brought that experience to Chicago and it was paying off in dividends. The game before Caruso had an exceptional chase-down block and also hit a huge corner three en route to a Bulls victory. Now he will be watching in street clothes for the foreseeable future.

The Bulls have already taken on a lot of injuries and couldn’t really afford another, especially at guard. Zach LaVine is nursing a sore knee. Lonzo Ball is expected to undergo knee surgery. Javonte Green and Derrick Jones Jr. are also out of the lineup. This isn’t Patrick Williams who, like Caruso went down early in the year because of a flagrant foul.

Hard fouls happen. It’s part of the game. But Allen was not trying to play the ball. He also has a history of dirty play and could have seriously injured Caruso. The fact he only got a one-game suspension is laughable.

Today24.pro
Why are eating disorders so hard to treat? - Anees Bahji The 2022 Audi S3 Is a Fun Sport Sedan that Rivals the Golf R High school scoreboard: Saturday’s NCS, CCS, CIF results in baseball, softball, volleyball, lacrosse, tennis #1 Backyard Weed That Can Replace ALL Your Medications