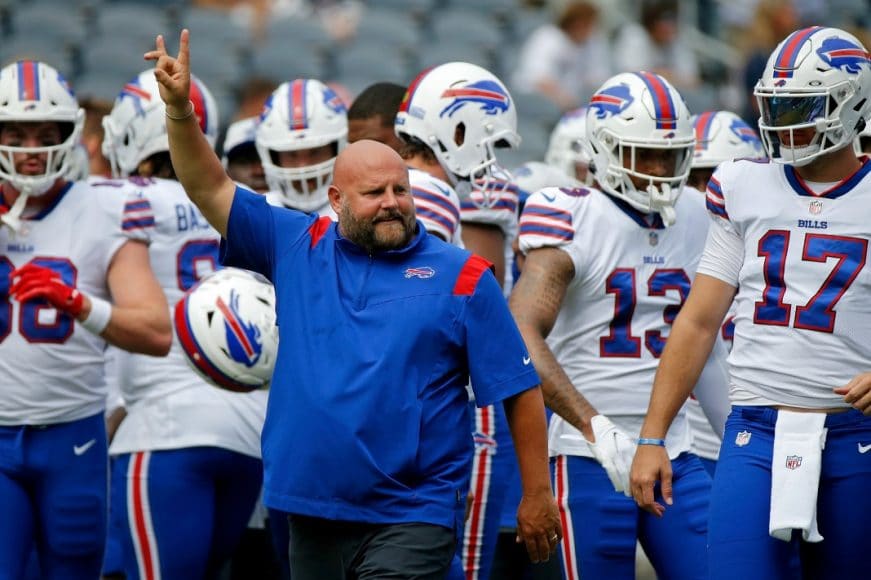 Even before the 2021 season began, most agreed that Brian Daboll was destined to get a head coaching job. He’d elevated Josh Allen from raw 1st round pick to superstar franchise quarterback. The new Jim Kelly for the Buffalo Bills. After some ups and downs over the past couple of months, Daboll’s offense hit the end of the regular season absolutely cooking. Not just through the air but also on the ground. They finished 3rd in points scored and 5th in total yards.

Still, the playoffs are a different animal. This team learned some harsh lessons last year in the AFC championship against Kansas City. Their first test was a big one against Bill Belichick and the New England Patriots. That defense always gives opponents problems. Well, apparently nobody bothered to tell Daboll that. On a night with below zero temperatures, the offensive coordinator delivered his Mona Lisa. The Bills hung 47 points on the mighty Pats with Allen throwing five touchdown passes.

If that weren’t enough, the Bills also rushed for over 170 yards.

It didn’t matter what New England tried to do. Daboll and Allen had an answer for them. It was the worst loss Bill Belichick had ever suffered in his playoff coaching career. There was no greater evidence of just how mortal the Patriots had become without Tom Brady than this game. The balance of power in that division has shifted to Buffalo and is likely to stay there for a long time to come.

The same probably can’t be said for Daboll. His stock was already high and after this game it figures to enter the stratosphere. He has multiple teams interested in him. The New York Giants are looking for a Joe Judge replacement and Daboll has deep roots in that state. Many believe the Miami Dolphins are anxious to reunite him with Tua Tagovailoa whom he coached at Alabama. Then there are the Chicago Bears.

For one, they have a young quarterback in Justin Fields that features many similar qualities as Allen. Good size, highly mobile, and boasting a strong arm. Not only that but the team’s search is being run by Bill Polian. The Hall of Fame executive has deep ties in Buffalo, having run that organization from 1986 to 1994. It isn’t hard to connect the dots. The Bears know they have to maximize Fields. Daboll is one of the hottest offensive names on the market.

It is worth noting that NFL insider Benjamin Allbright has consistently stated Brian Daboll would be their target once Matt Nagy was out of the picture. His first interview for the job takes place on Sunday. The timing seems rather perfect as he gets to go in with this showcase all over the national airwaves. If he can deliver a strong sales pitch to George McCaskey, then the job might be his to lose.

There might also be a GM to accompany him too. The team is also scheduled to interview Bills assistant GM Joe Schoen on the same day. The two have worked together since 2018. Schoen knows exactly the types of players necessary to make Daboll’s offense thrive. This would be a solid play for the Bears to implement.

VPN Sale: Save an extra 20% on these already-discounted VPN subscriptions