ASTEROIDS and viruses could be weaponised by invading aliens hellbent on colonising Earth to bleed the planet dry of its resources, according to a wild new theory.

Professor Paul Springer, from the US Air Command and Staff College in Alabama, spoke to Sun Online about a theoretical extraterrestrial attack. 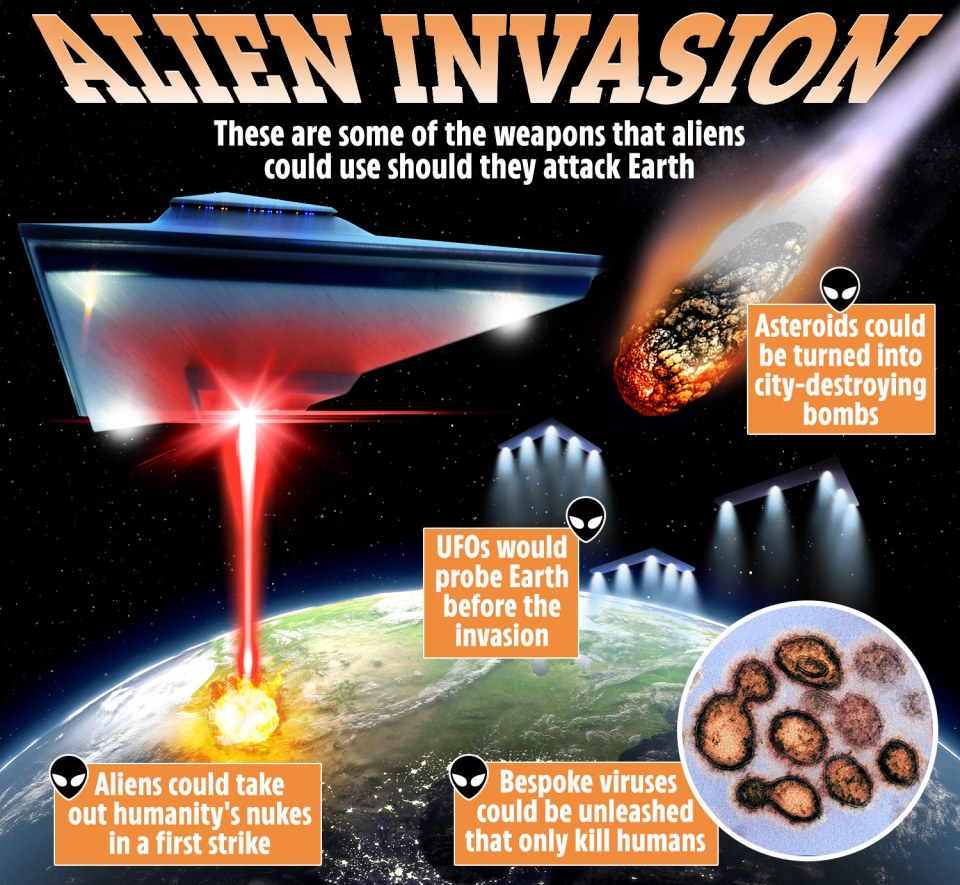 The expert, who specialises in the changing face of war, said it’s likely probes would be sent ahead of the invaders from beyond our solar system to scope out Earth.

Renewed interest in UFOs has surged following the publication of a landmark Pentagon report in June that saw the US admit for the first time there is something in their skies they cannot explain.

And the Congress and Senate have now voted through a plan for a new dedicated UFO office to probe the phenomena.

But should aliens actually invade, Prof Springer believes they would colonise planet Earth in an eerie echo of how Europeans colonised the Americas 300 years ago, with resources bled dry and indigenous people wiped out.

He told The Sun Online: “You have to assume any civilisation is acting in what it perceives to be its own best interest — they are not showing up because they want to be benevolent.”

The aliens themselves may well be nomadic, he says, seeking out planets with probes in a bid to secure something they want.

Earth’s nuclear weapons would be eliminated with lasers or improvised weapons such as asteroids guided to targets.

As revealed by The Sun Online in October a group of former nuclear base commanders claimed their nukes were disabled by UFOs in the 1960s and 1970s.

BACK WITH A BANG

London's NYE fireworks back ON tonight after being scrapped over Covid

ANDY'S OUT IN THE COLD

Prof Springer said this would be a likely scenario that would happen during an alien invasion.

“So you would know, you were essentially at my mercy.

“They would be hoping that humans will recognise when they are beaten and accept the status quo.”

Other weapons used, could be a tailor-made virus that just wipes out the human population – leaving Earth ready to be picked clean.

Or the aliens could use something humans have never even conceptualised.

For years, Hollywood has been prepping the world for an alien invasion, but Professor Springer said the reality could be “infinitely worse”.

Essentially, he said, earthlings would be faced with a scenario where an adversary with vastly superior technology.

But he added: “It is also possible that those civilisations that are making contact with us are having to adapt ordinary tools to be weapons.

“They may have to adapt what they have with them.”

This could include guiding asteroids to fall onto targets on Earth.

In terms of defence, he said he foresaw two priorities for mankind’s military – even as it may be massively outmatched.

He said: “One would be survival and capture of enemy technology/personnel.

“Survival, because without forces-in-being you can’t offer a coherent response.

“Capture, because you need to determine their capabilities and potential vulnerabilities.

“Plus, there’s always the possibility that they would value their own personnel to such an extent that you might be able to open communications.”

Alien invaders will likely want resources from planet Earth, Prof Springer says[/caption] Many experts believe aliens might not necessarily have a human-like form[/caption]

But perhaps aliens have already visited and scoped the planet out?

US officials dismissed UFOs at the conclusion of Project Blue Book in the 1960s – stating there was nothing to see.

And yet now around five decades on the debate has returned and is now being treated as a serious national security issue.

The debate which was for decades considered a fringe and wacky damaging topic is now being openly spoken about by very senior figures, including former President Bill Clinton and Barack Obama.

US lawmakers commissioned the Pentagon UFO report after a stunning string of leaked videos that showed military encounters with objects such as the infamous “Tic Tac”.

And following its release, Congress and Senate voted through the plans for a new dedicated office to probe the mysterious phenomena.

Questions remain whether the objects being encountered by the US are previously unknown drones – or perhaps something more alien.