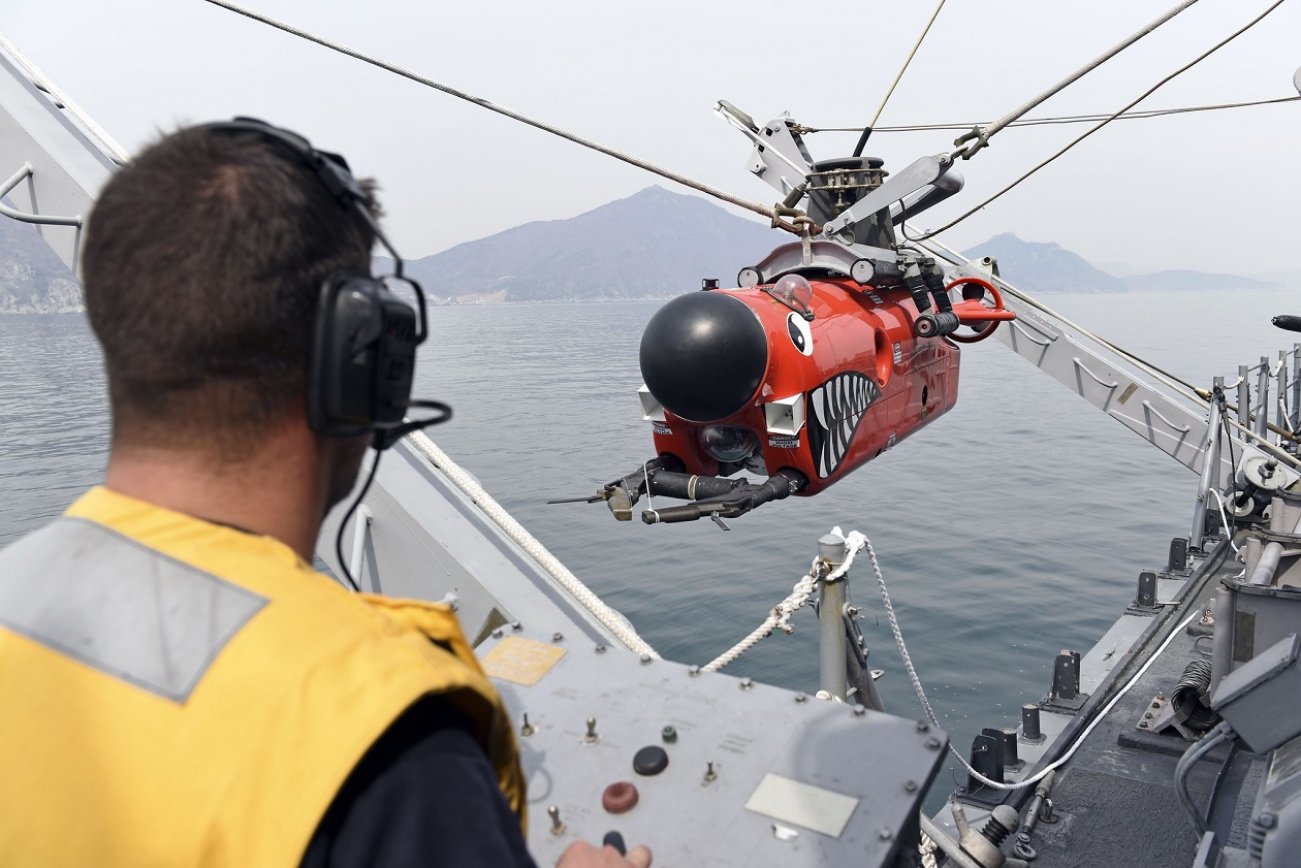 Neutralizing mines, once they are found, is one of the aims of this longer-term Navy effort to go beyond detection and succeed in destroying mines at greater standoff ranges.

Here's What You Need to Remember: Mines are a persistent, if under-appreciated, threat to naval forces, accounting for far more destruction to U.S. Navy ships than all other forms of attack since the end of World War II.

Should an enemy submarine surface well beyond undersea or surface drone detection range and send intelligence to attack platforms - U.S. Navy platforms could be vulnerable in some instances. Fortified by targeting data from well beyond the horizon, enemy subs, planes and ships might, in this case, be well-positioned for a coordinated strike.

However, should an interwoven web of Navy surveillance assets track and share vital information, coordinated surface, air and undersea drones could sustain an unprecedented advantage -- and a new attack synergy could actually begin to transform maritime warfare.

Enemy mines, surface ships, small boats and submarines might be detected more quickly, but, perhaps of greater importance, cross-domain drone connectivity would completely change the sensor-to-shooter kill chain. With this in mind, Navy weapons developers have put this initiative on the fast track, with the hope of rapidly networking its fleet of surface, air and undersea drones.

Submarine hunting with Textron’s Unmanned Surface Vehicles (USVs) is already breaking through to a new level of detection and attack technology, laying a foundation of progress from which to build toward a new horizon of the desired interconnected maritime drone combat. This new level of multi-domain drone networking was described at the Navy League’s Sea Air Space Symposium by Capt. Pete Small, Program Manager for Unmanned Systems. Small said this is now being advanced through a collaborative effort between Naval Sea Systems Command and Naval Air Systems Command.

“In the command and control area we are looking to standardize protocols across UUVs, USV and UAVs,” Small said. Using common protocol standards and flexible architecture, the Navy plans to solidify what Small called “a smattering of manned and unmanned systems, satellites and ground stations communicating with the right interfaces.”

Surface radio or GPS signals, coupled with various kinds of sonar or low-frequency undersea communications, form the foundation for emerging kinds of networking which bring the prospect of a new era of interconnectivity. Also, DARPA and BAE Systems are now working on an emerging GPS-like undersea networking technology as well.

“You might have a destroyer that needs to operate a UUV and a USV and link back to a shore-based command and control center. You have got to have common protocols. Every unmanned system is a little different and has its own requirements. Ships and subs have different elements. You need commonality for platform integration,” Small said.

This kind of air-surface-undersea coordination could, for example, greatly change the equation regarding mine detection. Much of the multi-pronged effort is centered upon Textron’s Unmanned Influence Sweep Systems (UISS) drone ships as a central node, forming a connective hub between undersea and aerial assets. The USVs, part of the now developing Mine Countermeasures Mission Unmanned Surface Vehicle (MCM USV), have been progressing for quite some time. Textron Systems is now on contract with the Navy to integrate the AQS-20 and AQS-24 sonar payloads which will expand range and detection technology. In addition, Textron is working with the Navy to expand USV functionality to include larger fleet numbers, coordinated sensing and possibly weapons-mounted attack missions.

Small said the Navy is ultimately looking for a “family of systems.”

Neutralizing mines, once they are found, is one of the aims of this longer-term Navy effort to go beyond detection and succeed in destroying mines at greater standoff ranges. The Navy is now considering the Barracuda Mine Neutralization System – a technology described by a Navy solicitation earlier this year as “a modular, low-cost, semi-autonomous, expendable neutralizer conforming to the A-size sonobuoy form factor.”

Navy documents further specify that Barracuda will use wireless communications, therefore allowing for a “tetherless” operation for the MCM USV. Military & Aerospace Electronics describes mine neutralizers as mini underwater drones armed with explosives which travel to an identified underwater mine – and then explode.

Barracuda will first be deployed from an LCS before potentially migrating to other surface or airborne platforms, Navy statements indicated.

Mine neutralization will naturally work in tandem with sonar systems, NAVSEA spokesman Alan Baribeau explained to Warrior earlier this year. Neutralization technologies can both send imagery data back to a host ship in real time through a line of sight connection or store sonar information for post-mission processing.

Taking this a step further, air-surface-undersea interoperability could potentially forge vital networking between current airborne mine detection technologies, such as the emerging Airborne Laser Mine Detection System (ALMDS), and now-operational aerial-drone operated Coastal Battlefield Reconnaissance and Analysis (COBRA). COBRA uses a sensor mounted on an MQ-8B Fire Scout Drone to scan for drones.

The ALMDS laser scans the water below, across wide areas, using sensors and data processing to convert light images into renderings of sea-structures below. The laser pod is mechanically attached to the MH-60S with a standard Bomb Rack Unit 14 mount. It is attached electrically via a primary and auxiliary umbilical cable to the operator console, according to a statement from the systems maker, Northrop Grumman. Instead of using more narrowly-configured, mechanized or towed mine detection systems, ALMDS massively expands the surface area from which mine detection takes place. Naturally, this enables shallow-water warships such as the LCS to have a safer sphere of operations as commanders will have much greater advanced warning of mine-cluttered areas.

If these systems, along with air-lowered sonobuoys, were better networked in real time with undersea drones, USVs and surface ships - the Navy would reach an unprecedented level of warfare ability. Some of this is already happening to varying degrees, yet the Navy’s accelerated strategic vision aims to catapult this kind of technology into a new era.

The significance of the mine threat, which continues to expand globally to include both deep water and littoral areas, is well articulated in a 2011 Naval War College Review article called “Taking Mines Seriously - Mine Warfare in China’s Near Seas.” Author Scott Truver says “mines are ‘weapons that wait.’ They are the quintessential naval asymmetric threat. Since the end of WWII, mines have seriously damaged or sunk almost four times more Navy ships than all other means of attack combined.”

Interestingly, coordinated drone autonomy has long been a focus of a fast-progressing Office of Naval Research effort called “Ghost Fleet.” The concept, which continues to make rapid strides forward, is aimed at synchronizing attack, ISR and other dis-aggregated operations across a large fleet of unmanned systems, programmed to communicate and operate in tandem - all in pursuit of mission-critical operations.

Kris Osborn is a Senior Fellow at The Lexington Institute. Osborn previously served at the Pentagon as a Highly Qualified Expert with the Office of the Assistant Secretary of the Army - Acquisition, Logistics & Technology. Osborn has also worked as an anchor and on-air military specialist at national TV networks. He also has a Masters Degree in Comparative Literature from Columbia University.

Warm and pleasant weekend ahead

'Put blood on every ambulance': ATCEMS looks toward future of transfusions in the field

Ubisoft executive says users 'don't get it' regarding NFT backlash