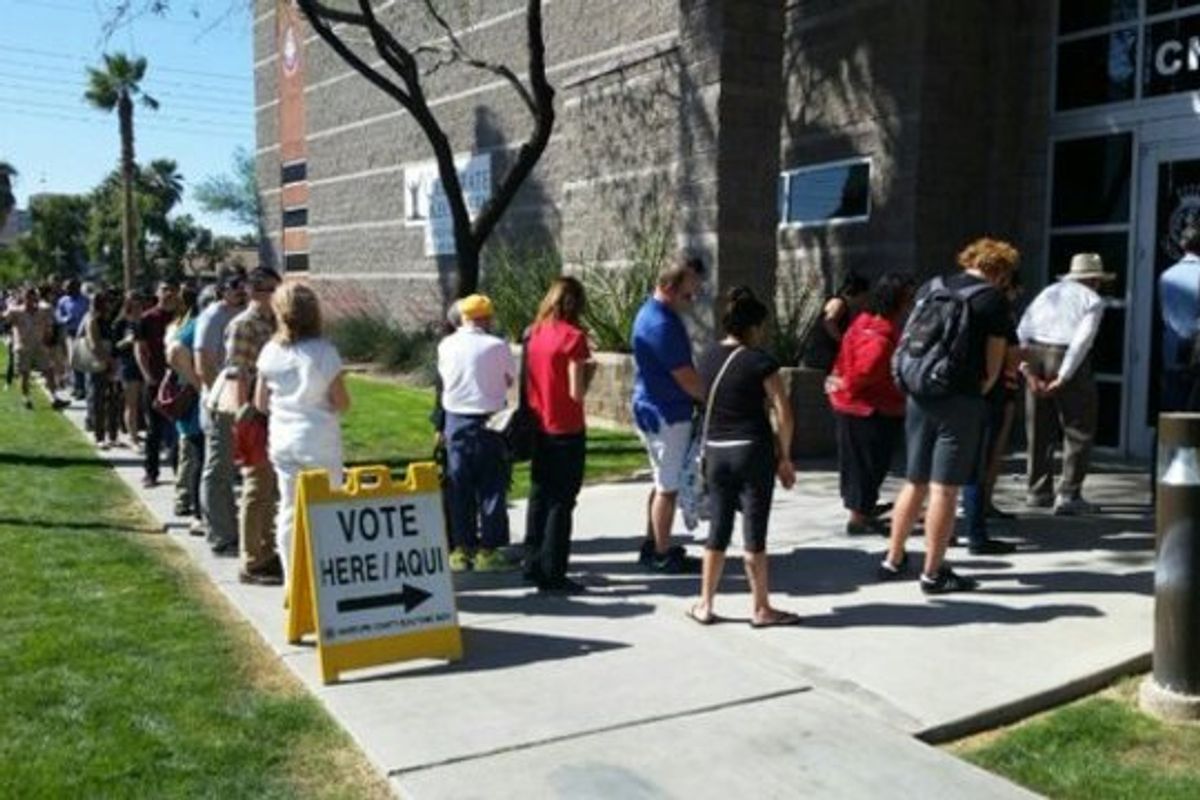 Alleging that Georgia's new GOP-drawn General Assembly district maps violate the Voting Rights Act and attempt to disenfranchise Black voters, civil rights groups on Thursday filed a federal lawsuit against the Republican secretary of state in a bid to block the maps.

The suit was filed in the United States District Court in Atlanta by the American Civil Liberties Union, the ACLU of Georgia, and WilmerHale on behalf of Alpha Phi Alpha Fraternity, Inc., the Sixth District of the African Methodist Episcopal Church, and individual Georgia voters against Secretary of State Brad Raffensperger.

"These newly drawn maps are a brazen attempt by Georgia politicians to undermine the political power of Black voters," Sophia Lin Lakin, deputy director of the ACLU's Voting Rights Project, said in a statement.

"State legislatures are responsible for laws and policies that profoundly impact our daily lives," she added. "There's no legitimate justification for drawing maps that deny Black voters an opportunity to elect representatives who will fight for them in these critical state House deliberations. Politicians don't get to choose their voters—voters get to choose their politicians."

The suit alleges that "Section 2 of the Voting Rights Act makes it illegal for states to draw district lines that water down the voting strength of voters from particular racial groups. Yet Georgia's newly-adopted legislative maps do just that."

"The new state Senate and state House maps dilute the voting strength of Black Georgians," the document contends, "because they fail to include more than a half dozen additional districts where Black voters could form a majority and have the opportunity to elect candidates of their choice."

Georgia is one of the fastest growing states in the nation—and that growth has been driven entirely by Black Georgians and other Georgians of color. Over the last decade, Georgia's Black population grew by 16%, while the population of white Georgians fell during the same period.
Black Georgians today comprise a third of Georgia residents, and people of color now make up nearly half of the state's population. The growth of the state's Black and other minority communities is driving Georgia's continued economic growth and its increasing prominence on the national stage.
Yet the new legislative maps for Georgia's General Assembly, which were rushed through the legislative process in a week and a half, do not account for the growth of Georgia's Black population. Rather, the new maps systematically minimize the political power of Black Georgians in violation of federal law.

The suit claims that the new district maps "negate the unprecedented growth of Black communities in Georgia, unnecessarily packing Black Georgians together in some places, dissecting areas with large, cohesive Black populations in others, and ultimately diminishing Black Georgians' true voting strength statewide and in specific districts."

"The new maps systematically minimize the political power of Black Georgians in violation of federal law."

"Especially in light of Georgia's legacy of racial discrimination against and subordination of its Black population and the ongoing, accumulated effects of that legacy, the state's maps will prevent Black Georgians from exercising political power on an equal playing field with white Georgians," it states.

"Georgia can and must do better than this," the lawsuit asserts. "The state's manipulation of the redistricting process to dilute the political strength of Black voters robs fellow citizens of the ability to engage in politics with equal dignity and equal opportunity, violating Section 2 of the Voting Rights Act of 1965."

Earlier this year, the U.S. Justice Department sued Georgia over a law passed by the state's GOP-controlled Legislature and signed in March by Republican Gov. Brian Kemp that the Biden administration and civil rights advocates allege is meant to disenfranchise Black voters.

The new Georgia lawsuit comes days after civil rights groups including the national and state branches of the ACLU sued South Carolina leaders over a new state House district map that plaintiffs claim was racially gerrymandered by the Republican-controlled Legislature.

"For 150 years, politicians on both sides of the aisle have stopped at nothing to prevent voters from fairly electing their leaders, especially citizens who are Black," ACLU of Georgia legal director Sean J. Young said in a statement. "It's well past time for Georgia to turn the page and allow all citizens to participate fully in our democracy."

Medvedev: ‘I Know What I’m Capable Of’