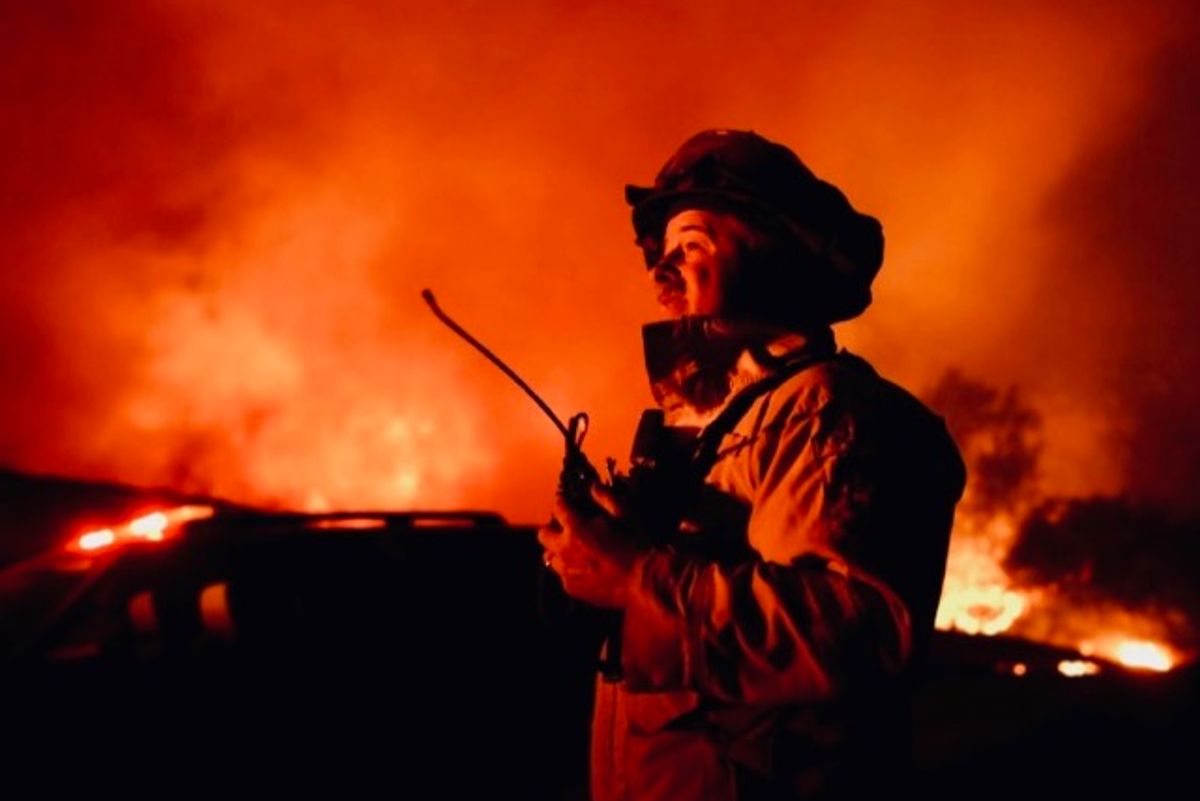 Alongside a lingering global pandemic, the year 2021 was filled with climate disasters, some so intense they surprised even the scientists who study them.

The area around Boulder, Colorado, was so unusually dry on Dec. 30, 2021, that a powerful wind storm sent grass fires racing through neighborhoods in Superior and Louisville, burning hundreds of homes in a matter of hours. Officials said the winds were so strong, there was little firefighters could do but evacuate homes and businesses in the fires’ paths.

In the U.S. alone, damage from the biggest climate and weather disasters is expected to total well over US$100 billion in 2021. Many of these extreme weather events have been linked to human-caused climate change, and they offer a glimpse of what to expect in a rapidly warming world.

In the U.S., something in particular stood out: a sharp national precipitation divide, with one side of the country too wet, the other too dry.

As a climate scientist, I study the impact of global warming on precipitation and the water cycle. Here’s what happened with precipitation in the U.S. in 2021 and why we’re likely to see similar scenarios in the future.

The eastern U.S. weathered storm after storm in 2021. Record rainfall in Tennessee triggered deadly flash flooding in August. The remnants of Hurricane Ida merged with another front days after the hurricane hit Louisiana and became so intense they set rainfall records and flooded subway stations and basement apartments in New York and Pennsylvania, with devastating consequences. Severe storms hit several states with deadly tornadoes in December.

Almost the entire West, meanwhile, was in some stage of drought, helping to fuel wildfires that swept through forests and towns.

This kind of east-west weather divide can be enhanced by La Niña, a periodical phenomenon fueled by Pacific Ocean temperatures that tends to leave the Southwest drier than normal and the North and much of the eastern half of the U.S. wetter.

But something else is going on: Global warming fuels both dryness and extreme rainfall. 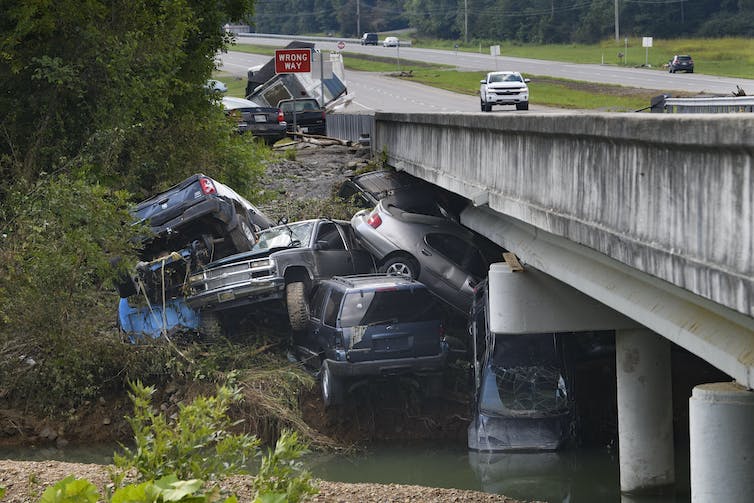 Flash flooding swept away cars and damaged homes in Tennessee in August 2021.

3 impacts of global warming on rainfall

Three things in particular happen to precipitation when the planet warms.

Higher temperature increases evaporation from Earth’s surface, drying out vegetation and soils, which can fuel wildfires. It also increases the atmosphere’s capacity to hold moisture at a rate of about 7% per degree Celsius that the planet warms. With more moisture evaporating, global precipitation is expected to increase, but this increase is not uniform.

With higher temperature, more moisture is needed to reach the condensation level to form precipitation. As a result, light precipitation will be less common. But with more moisture in the atmosphere, when storm systems do develop, the increased humidity leads to heavier rainfall events.

Research shows that both the frequency and intensity of heavy precipitation events has increased since the 1950s over most land areas. 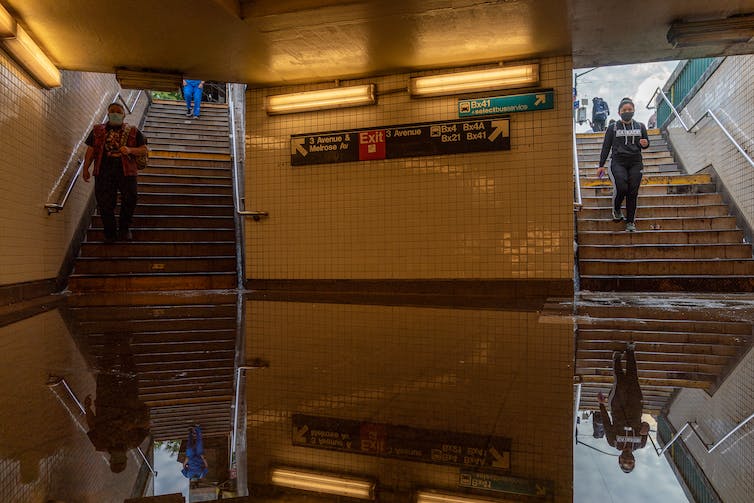 Precipitation is not distributed evenly over the planet because of the global atmosphere circulation pattern. This global circulation brings moisture to places where winds come together, such as the tropical regions where we find most of the world’s rainforests, and away from places where winds diverge, such as the midlatitudes where most world’s deserts are located.

Assuming no significant changes in global wind patterns, increases in evaporation and moisture will mean more moisture is transported from dry areas to wet areas and into the storm tracks at higher latitudes. Global warming could also potentially change the global circulation pattern, causing a shift in the world’s wet and dry regions. 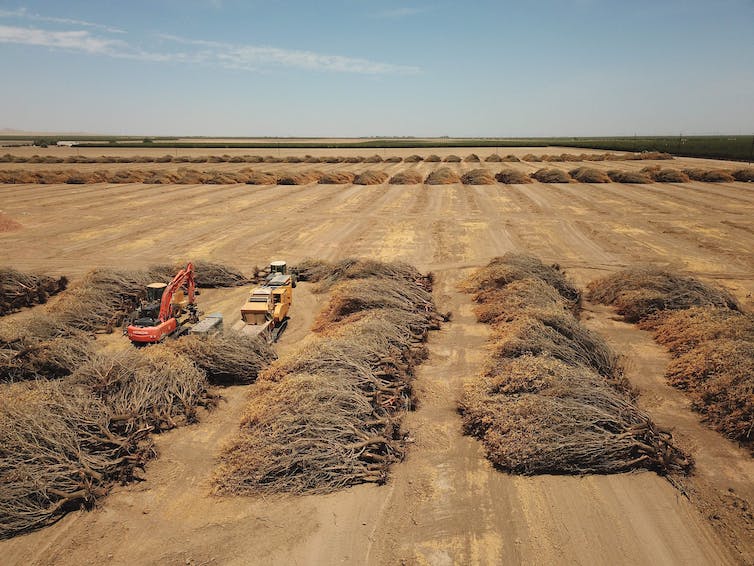 A California farmer pulled out almond groves in June 2021 because of a lack of water to irrigate them.

Mountains, moisture and the east-west divide

These dynamics are also affected by local conditions, such as the shape of the land, the types of plants on it and the presence of major water bodies.

Higher temperature in areas like these where the moisture supply is already limited means less humidity in the air, leading to less rain. Higher temperature and less precipitation would also reduce snow packs in the mountains and cause earlier melt in spring. All these changes are likely to increase aridity in the West. 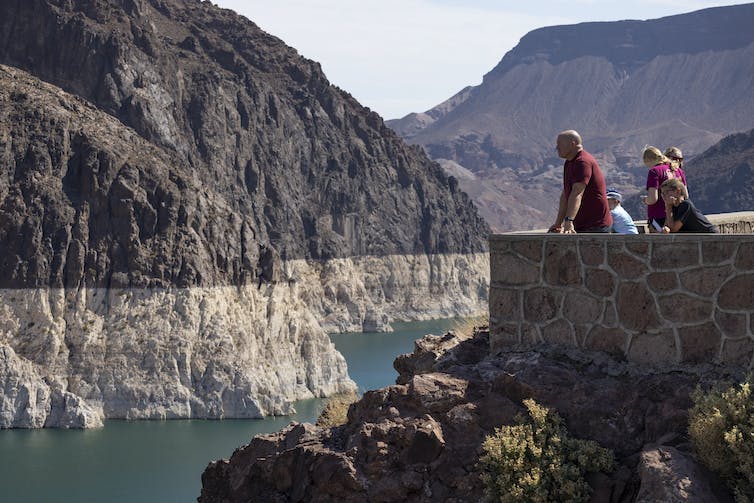 The ‘bathtub ring’ around Lake Mead in July 2021 reflected record low water levels in the Colorado River reservoir, which fell below 35% capacity and triggered water use restrictions.

The eastern U.S., on the other hand, receives abundant moisture from the North Atlantic and the Gulf of Mexico carried by the easterly trade wind. With abundant moisture supply, increasing temperature means more moisture in the atmosphere, leading to more precipitation and stronger storms.

This is what years of precipitation records show and what is projected for future precipitation based on climate models. Both show a decrease in annual precipitation in the West, likely meaning more long periods of drought, and an increase in the East with global warming.

[Read The Conversation’s newsletters to understand the world. Sign up today.]

This article was updated Dec. 30, 2021, with the fires in Boulder County, Colorado.

Royals will ‘breathe a sigh of relief’ if Meghan Markle and Prince Harry don’t come to Philip’s memorial, expert says