JACK WILSHERE has backed Mikel Arteta to lead Arsenal to their first Premier League title since 2004 within the next few years.

However the 29-year-old has insisted the Gunners could only compete at the top of the table should the Spaniard be given cash to splash in the transfer market.

Former Arsenal midfielder Jack Wilshere has backed Mikel Arteta to guide the club to Premier League glory[/caption] Arteta took charge of the Gunners two years ago, where he won the FA Cup in his first season[/caption]

Arsenal currently sit fourth in the top-flight after racking up four consecutive wins, while they are also in the semi-finals of the Carabao Cup.

And free agent Wilshere, who has been training back at London Colney to maintain his fitness, believes more recruits are needed to turn the club into title challengers.

Speaking on talkSPORT, the former West Ham midfielder was asked whether he can see Arteta guiding Arsenal to Premier League glory.

Wilshere, who has been linked with a move to Brazilian outfit Fortaleza, said: “I think with the right backing and bringing the right players in.

“He definitely has a clear structure and philosophy of the way he sees football and how he wants it to be played.

“Listen, they’re not going to win the league this year.

“But in the next two or three years, if they can get into the top four, get a few big signings in, give them time to settle and see how the manager wants them to play.

Invincibles legend Sol Campbell echoed Wilshere’s views, as he hailed Arteta for Arsenal’s upturn in form following their disastrous start to the season.

He told the talkSPORT Breakfast: “I saw Jack talking… in the next two or three years if they bring the right players in, there’s a possibility, yes of course there is.

“They are that close. At the moment Man City are just steamrolling it, they’re unbelievable the way they’re putting teams away, in both tight games and with big scores.

“It shows they’ve got that fantastic winning mentality that they can hold their nerve in tight games and also blow teams away. But Arsenal, I think yeah, if they get the right players in, why not?

“They’re going really well, Arteta has got them firing, they’ve had big results as well – 5-0 against Norwich and 4-1 away at Leeds – if you want to show purpose you’ve got to beat teams like that at the bottom, sweep them aside and carry on. 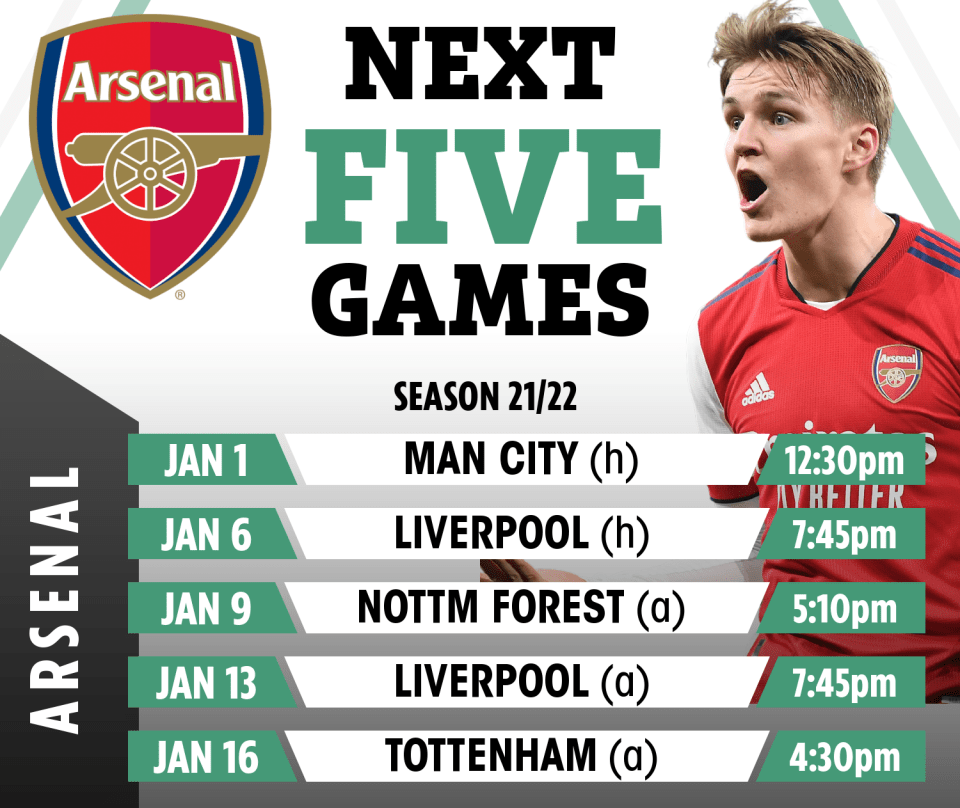 “They’re going really, really well. A couple of the results have not gone their way, and they started the season poorly, but they’ve recovered.

“It’s a great test for them, but I think they can go all the way.

“They’ve got fantastic players who are in great form. [Gabriel] Martinelli, Odegaard, [Emile] Smith Rowe, all these players are playing well, Ramsdale has brought so much life to the team.