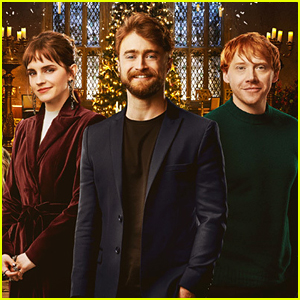 The highly anticipated Harry Potter reunion special is just 24 hours away from being released and we’re so excited to watch!

Daniel Radcliffe, Emma Watson, Rupert Grint, and other cast members from the Harry Potter film franchise have reunited on-screen for the first time to celebrate the anniversary of the first film, Harry Potter and the Sorcerer’s Stone.

Even though the special is timed to celebrate the anniversary of Sorcerer’s Stone, it will cover all eight films.

Harry Potter author J.K. Rowling is not participating in the reunion and a source has explained why she is absent, despite receiving an invite to attend.

Click inside for all the details you need to know…

What time does the special premiere?

The special premieres on HBO Max on Saturday (January 1) at 3am ET / 12am PT.

Fans in the pacific time zone will be able to watch the special at the stroke of midnight on New Year’s Day while the eastern time zone will have to wait until 3am.

What if I don’t have HBO Max?

The special will eventually air on television! WarnerMedia has announced that the special will air on TBS and Cartoon Network in spring 2022 to promote the release of Fantastic Beasts: The Secrets of Dumbledore. The movie is currently scheduled to hit theaters on April 15, 2022.

Who will appear in the special?

Where is Harry Potter streaming?

You can currently watch all eight Harry Potter movies on both HBO Max and Peacock.

East Coast buttons up ahead of snow; Boston could get 2 feet