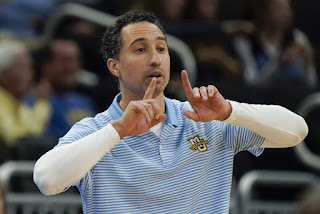 Shaka Smart is no stranger to the NCAA bubble

When Andy Glockner wrote Bubble Watch for Sports Illustrated, Marquette was dubbed "Team Bubble Watch" in 2009-10 as they rallied from an 11-8 start to an eventual 6-seed before returning to the NCAA Bubble the next year as an 11-seed and one of the last teams in the field. Interestingly, that 2011 season was also when Shaka Smart brought VCU to Dayton as another of the last teams in. This year's Marquette team looks to be right back in that bubble mix based on early returns.

Marquette debuts in the first Cracked Sidewalks S-Curve of the year as an 11-seed that would be playing in Dayton. The real killer for this team are their computer numbers. They are currently 75th in the NET and 83rd in kenpom. They do have a decent Strength of Record at 54th which helped their case. The real positives, however, are the big wins they have. Marquette is 2-4 in Quadrant 1, including wins over Illinois and West Virginia. Four of their five losses come to teams on the top-6 seed lines, with the St. Bonaventure loss being the biggest anchor to their resume.

Looking at teams in their range (10-seed to NIT 2-seed) Marquette's two Quadrant 1 wins were only equaled by Creighton and Monmouth. Marquette and Oklahoma were the only two teams with three Quadrant 1+2 wins. The Selection Committee has shown they value proven wins, and of the teams considered for the field but left out, none had a single Quadrant 1A win (like MU's win over Illinois) and only Memphis had as many Q1+2 wins as Marquette. Before digging into the full S-Curve, a few thoughts on the field:

Non-Baylor Texas teams drove me nuts: Ignoring the single-bid conferences, the state of Texas had four at-large worthy teams aside from Baylor. Those were Houston, Texas Tech, Texas, and TCU. Those teams went a COMBINED 1-6 in Quadrant 1 games. That's right, Marquette has twice as many Q1 wins as those four teams combined. They are also a combined 36-0 against Q3+4 opponents. Apparently, the way to schedule in Texas is to only play and beat up on crap teams. Because of that, they are generally seeded lower here than they are elsewhere. If you want to be seeded as highly as your computer numbers say you deserve, beat someone of note. There's no other way to convince the Selection Committee you aren't a fraud.

The Pac-12 outside of Arizona, USC, and UCLA is awful: I didn't end up seriously considering any Pac-12 teams for inclusion other than those three. That isn't to say I didn't look at their resumes, I did, but they are ghastly. The other 9 teams are a combined 2-18 against Q1. The only three top-100 NET teams (Utah, Washington State, Oregon) outside that top three each have more Q3+4 losses than Q1 wins. And aside from one of those teams getting multiple wins against the top-3, it's virtually impossible to see any other at-large candidates emerging because the quality win opportunities simply aren't there.

The WCC isn't just Gonzaga: The Pac-12's woes open up the door for other teams because you have to put 68 teams in the field. San Francisco and St. Mary's have both picked up Q1 wins in non-con and while BYU hasn't done that, their 5 Q2 wins are enough that only two teams (Auburn and Michigan State) have more Q1+2 wins than the Cougars. If those three teams can keep their losses in league amongst themselves, there's a real chance the WCC could be a 4-bid league.

Heart attacks plummet after Valentine’s Day ‘thanks to sex, chocolate and romance’

American Express Green card review: Earn 45,000 Membership Rewards points and get up to $200 a year in credits