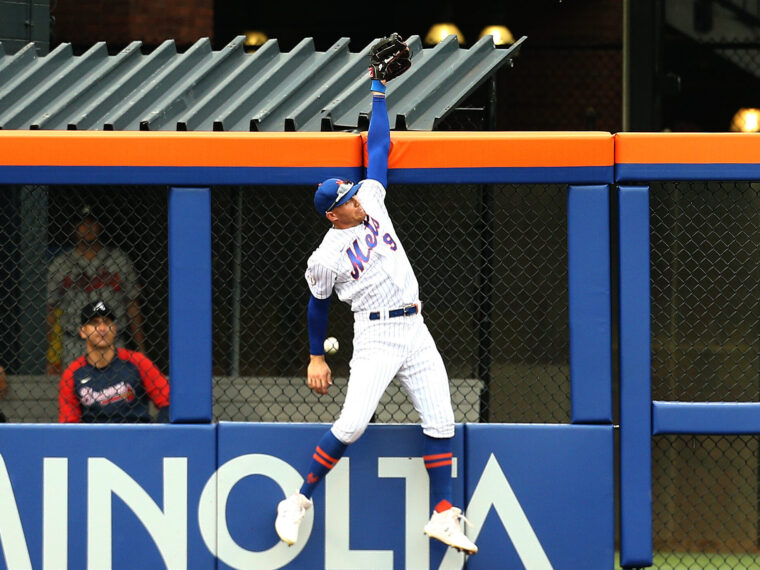 As 2021 comes to a close, let’s count down the top defensive plays the Mets during the season.

This was literally the first ground ball James McCann had ever fielded at first base in his 12-year professional career. pic.twitter.com/O3Xbxz130a

It was a weird Mets season, and McCann playing some first base and immediately making a great play made it even weirder.

Go out and GET IT, Johneshwy Fargas!! ✋

And don’t forget about this play from Dominic Smith in the inning prior.

This #Mets game was sooo freakin' fun to watch. Such an incredible play from Dom Smith and that fist pump from Johneshwy Fargas is just as good as the catch. #LGM (via Mets) pic.twitter.com/3cdslHp6XP

Fargas wasn’t with the Mets for very long, but he made a couple of highlight catches and showed off his plus speed on the bases as well.

One of the big bright spots from the 2021 Mets season was the improved defense of Nimmo in center field.

FRANCISCO LINDOR DIVES TO THE BAG FOR THE UNASSISTED DOUBLE PLAY! ???? pic.twitter.com/0ReVTUV72b

Lindor had a ton of plays in 2021 that he made look so easy because of his defensive skills. The Gold Glove Award finalist led all NL players with 20 outs above average in his first season with the Mets.

Look at this catch by Albert Almora Jr. for the Syracuse Mets.

Think it’s obvious to say this would be the defensive play of the year if it was done in the majors.

Two pretty excellent plays from Javier Báez today, to go along with his three hits in five at-bats.

The first: a slick tag on a caught stealing in Game 1. The second: a sliding stop to rob Lewis Brinson of a hit in Game 2. pic.twitter.com/pJNxQi2St5

It was a treat to be able to watch Báez in his short time with the Mets.

Lee had a tough time with the bat in his short time with the Mets (though he had .941 OPS in Triple-A), but he still made a couple of great catches including two in this game against the Braves.

Crazy play by Javier Báez and Marcus Stroman to catch Juan Soto trying to take an unoccupied base. (Stroman is checked out afterward by trainers, but he appears fine.) pic.twitter.com/qKIFW3IE7a

The combination of skills from El Mago and Stroman in this play is special. As Keith Hernandez noted in the booth, something that really hasn’t been done before in the big leagues.