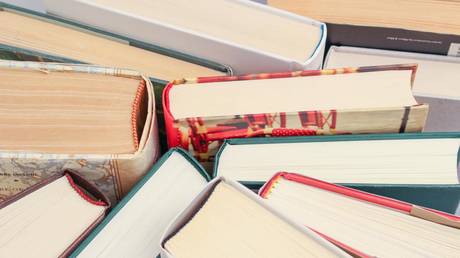 Most Americans chose books written about former US President Donald Trump this year, a poll shows

Three of the five most popular books from the 2021 New York Times Best Seller list were about former US president Donald Trump and his last year in office, a survey in the US has found.

The survey revealed “a surprising trend towards nonfiction and current events, with three of the top five most popular books specifically focused on President Trump’s final year in office,” OnePoll said.

‘Nightmare Scenario: Inside the Trump Administration’s Response to the Pandemic That Changed History,’ written by Washington Post reporters Yasmeen Abutaleb and Damian Paletta, topped the most-read-books list. The authors “describe in sobering detail how the Trump White House chose to forget about the current pandemic while it was still going on,” a review in The Washington Post said.

The second place was occupied by ‘Walk In My Combat Boots: True Stories from America’s Bravest Warriors,’ a work based on a collection of interviews with service members, according to its description on Amazon.

A book by another pair of Washington Post reporters, Carol Leonnig and Philip Rucker, came in third. The work, titled ‘I Alone Can Fix It: Donald J. Trump's Catastrophic Final Year,’ also focuses on Trump’s response to the pandemic, as well as on his failed attempts to contest his loss in the 2020 presidential election.

Yet another book about Trump was reported as fourth most-read by the respondents to OnePoll’s survey. ‘Midnight in Washington: How We Almost Lost Our Democracy and Still Could,’ authored by Democratic Party Congressman Adam Schiff, is an account of the riot on January 6, 2021, when a mob of Trump supporters broke through police barricades and briefly overran the US Capitol.

The fifth most-read book was ‘Not All Diamonds and Rosé: The Inside Story of The Real Housewives from the People Who Lived It,’ by Dave Quinn.