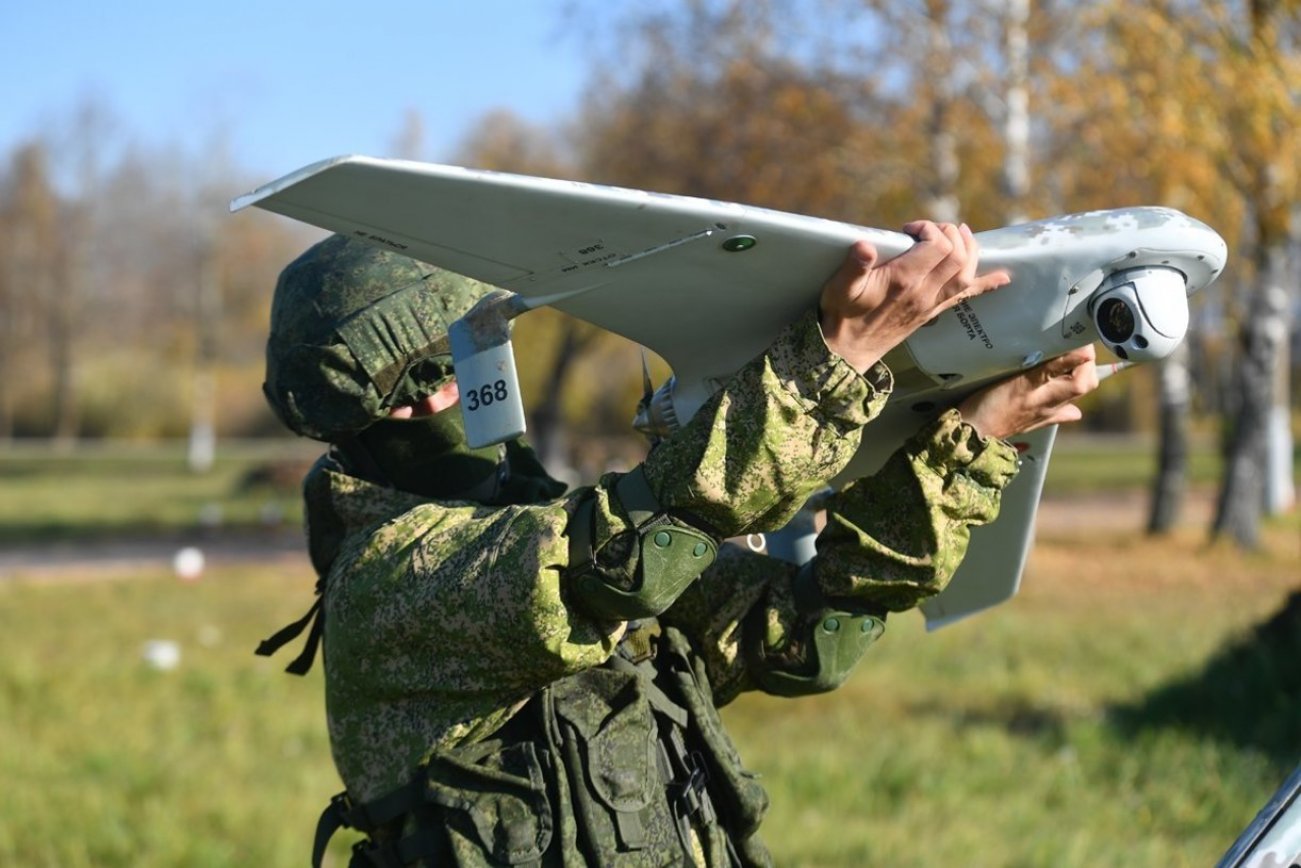 The Lancet-3 is a successor to an earlier flying-wing style loitering munition developed by ZALA called the KYB Kub (Cube), which reportedly was combat-tested in Syria in 2019.

Here's What You Need to Remember: There’s no recovery provisions for the Lancet-3, though: it’s built for deadly one-way missions.

Though the Russian military has made effective use of surveillance drones in Ukraine and Syria for targeting lethal air and artillery strikes, it has lagged far behind China, Israel and Turkey in fielding loitering munitions and unmanned combat air vehicles (UCAVs). Thus the report may mark Russia’s first combat use of a purpose-designed loitering munitions.

One video shows the “first person” view from the Lancet-3’s video feed as it dives towards a truck allegedly used by a local commander of the HTS rebel group in Idlib province. The feed cuts ominously as the drone’s onboard warhead detonates.

Footage from another drone observing the attack shows the Lancet-3 smack into the ground in front of the truck (seemingly a near miss), its six-pound warhead exploding with a bright flash.

A second overhead recording shows an insurgent who was manning a machinegun dash into a nearby shack for cover. A drone explodes next to the shack seconds later.

First unveiled in a 2019 arms exhibition, the Lancet has a cylindrical fuselage with two sets of X-shaped flight control surfaces that tuck inwards for storage. It has an electrically powered two-blade pusher propeller on its tail and sensor unit in its nose. The missile-like drone is hurled into the air by a simple ground-based catapult system and can cruise at fifty-to-sixty-eight miles per hour.

There’s no recovery provisions for the Lancet-3, though: it’s built for deadly one-way missions. Though the drone can be assigned coordinates to attack, the Lancet’s operator can also fly the munition around to search for targets for up to its forty minutes of flight endurance and twenty-five mile range.

Once a target is identified, the loitering munitions plunges down at up to 180 miles per hour, receiving manual course correction from the operator before detonating its 6.6-pound warhead.

The Lancet-3’s ability to be used both to search and destroy means it doesn’t require support from a separate reconnaissance system. However, a smaller twelve-pound Lancet-1 model could be used provide surveillance support.

In 2020, Russian-backed and equipped forces in Libya, Syria and the Nagorno-Karabakh region were in dealt a succession of stunning defeats due in significant part to strikes performed by Turkish Bayraktar UCAV drones, as well as Israeli loitering munitions in the latter conflict. These dramatic battlefield outcomes will likely hasten Russia’s entry into armed drone operations in the 2020s, both for tactical-level systems like the Lancet as well as higher-capability (and cost) UCAVs.

The Lancet-3 is a successor to an earlier flying-wing style loitering munition developed by ZALA called the KYB Kub (Cube), which reportedly was combat-tested in Syria in 2019. According to an article, the Kub’s electronics and control station were deemed in need of further development, particularly because it lacked a video feed allowing the operator to adjust the munition’s flight path in the moments prior to impact.

By contrast the Lancet-3’s video feed allows it to be manually piloted by an operator to hit a moving target or respond to developments on the battlefield.

The designers at ZALA also reportedly put thought into foiling anti-drone countermeasures. The Lancet’s missile-like configuration is smaller and more maneuverable, allegedly making it harder to discriminate from a bird when detected on radar.

The designer have also vaguely claimed the drone has reflective surfaces resistant to laser weapons, which are often touted as a cost-efficient countermeasures against drones.

It’s also unclear how hardened the drone’s command link is versus the sort of electronic warfare countermeasures which have proven effective against drones.

Regardless, reports claim the Lancets, which currently are assembled by hand, are less costly than Western loitering munitions or even smart artillery shells like the laser-guided Krasnopol system, though specific prices are not cited. Indeed, the Lancet’s impact will depend on just how affordable it is, and whether and how it is adopted more widely into service by the Russian military.

As a limited-issue hardware for special forces, loitering munitions are a useful but hardly irreplaceable capability. But if logistical footprint and cost allow them to be fielded on a large scale, say as a support weapon platoon in Russian battalion tactical groups, than that would give even ordinary formations a twenty-five-mile range precision strike capability.

That said, it’s also important not to make overly broad equivalencies on the impact of very different unmanned weapons.

For example, Israeli-built Harop kamikaze drone uses a fifty-pound warhead whereas the Lancet-3 has a maximum 6.6-pound payload. That means the Harop poses a threat to armored vehicles and fortified positions, while the Lancet is mostly effective against soft targets, and may require a direct hit to knockout even lightly protected vehicles.

Furthermore, the Harop’s range of 620 miles means it can be used to execute deep strikes impossible with smaller loitering munitions. Of course, a Harop is also many times more expensive.

ZALA also claims it is working on a radically different application of the Lancet drone: as formations of hovering sentries serving as a sort of aerial minefield to intercept and destroy incoming hostile drones. A demo video of the concept pointedly shows a Lancet ramming into a Turkish Bayraktar drone.

However, the Lancet is a surprising choice of platform to realize this concept due to its limited endurance. Presumably a longer-endurance variant might be developed, or it could be tethered to a ground-based generator and released when approaching drones are detected.

Intercepting agile drones would also likely call for a seeker on the drone or command guidance directed by a ground-based sensor, and perhaps greater speed and maximum altitude. After all, a Bayraktar can fly as high as 18,000 to 27,000 feet, quite possibly exceeding the ceiling of the Lancet-3.

Despite these technical challenges, the ZALA designers have their heads in the right place. If one assumes future battlefields will see a proliferation of deadly but affordable drones and loitering munitions, it becomes incumbent not only to field that offensive capability, but to devise means of defending against it.

It’s too soon to tell which counter-drone tactics and technologies will prove most effective, but using drones to hunt drones has the appeal of using a platform that’s potentially as cost-efficient as the threat it’s trying to counter.

Sébastien Roblin holds a master’s degree in conflict resolution from Georgetown University and served as a university instructor for the Peace Corps in China. He has also worked in education, editing and refugee resettlement in France and the United States.

My wife’s best friend said she’s GLAD she’s infertile and can never have kids after a fight, I’ll never forgive her

The Downsides of Russian War with Ukraine