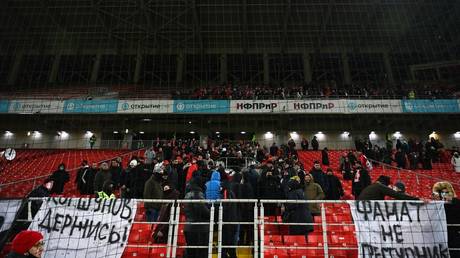 Russian football has been hit by a wave of fan protests following the mass detention of supporters at a match in Moscow. At the heart of the issue is a controversial plan for a fan identification system.

The stands aren’t as full as usual at the latest round of Russian Premier League matches across the country this weekend.

On Saturday in Samara, around 850km east of Moscow, sections of the crowd walked out before the meeting between Krylia Sovetov and CSKA was barely 20 minutes old.

Fans followed suit later in the day, including in Moscow as Spartak took on Akhmat Grozny and Lokomotiv hosted Ural.

In St. Petersburg the day before, Zenit fans in the ‘Virazh’ section of their Gazprom Arena home turned their backs and left en masse in the 60th minute of the match against Rostov.

The protests were precipitated by events a week ago in Moscow, when more than 400 CSKA fans were detained by riot police after dozens of them had set off flares in unison at the end of the game.

In an attempt to root out those responsible, and with the stadium CCTV cameras mysteriously suffering a hack attack, an entire section of supporters at CSKA's VEB Arena was initially blocked from leaving.

Fans were eventually filtered through security checks before being funneled in their hundreds into waiting police vans more than three hours after the final whistle. Accounts from supporters said they hadn’t even been able to use the toilets, although women and children were reportedly allowed to leave.

It was announced on Wednesday that 20 CSKA fans had been fined and banned from attending sporting events for a period of two years because of their role in the pyro display.

The fire show and the ensuing consequences dished out by police have sparked this weekend's protests – but it is the reason the pyro display was held in the place first which is the crux of far broader discontent among many Russian football supporters.

Before the flare-filled conclusion to the CSKA-Zenit match, both sets of fans had chanted "We don't need FAN ID", in reference to contentious plans to introduce a fan 'passport' system for larger-scale sports events in Russia.

The scheme is not entirely alien to Russia. It was first used when Russia hosted the 2017 FIFA Confederations Cup and was utilized again at the Russia 2018 World Cup, as well as in St. Petersburg during Euro 2020. It requires fans to have a personalized FAN ID card in addition to their tickets in order to attend events.

But while those occasions saw Russia host multitudes of foreign fans, this time the debate is about rolling out the scheme permanently for domestic purposes.

The debate over a FAN ID system has been rumbling for several years, but regained significant momentum after the proposal passed the first reading in the State Duma in mid-November.

The details will continue to be fleshed out before the second reading, but a budget of around 770 million rubles ($10.4 million) has already been earmarked.

The arguments in favor of the plan are primarily that it will boost security and safety at matches and help the authorities weed out unsavory elements among football's fanbase.

Last Sunday’s events in Moscow have been held up as further justification for additional checks.

“Everything will be fine – the system was invented in order to catch violent and dangerous threats to society…," she said.

"The Fan ID will allow offenders and provocateurs to be identified and prevent the repetition of illegal actions.”

The counter-claim, however, is that the move is entirely unnecessary and that Russia has already made big strides with improving safety at football matches.

FAN IDs will create additional hassle for fans and more barriers to attending matches. Ordinarily, season-ticket holders have to provide their passport data anyway, while fans buying tickets on club websites typically have to set-up a user account first.

FAN IDs will mean yet more data being handed over to the authorities; there are also fears that attendances could go down as a result as more casual fans are prevented from buying tickets spontaneously.

"Coming soon at all stands in the country," read one banner as deserting Spartak fans made their views clear as they emptied their seats on Saturday.

Despite the first reading being passed with just over 70% of support in the Duma, the proposal has met with opposition.

Dmitry Pevtsov, a famous actor-turned-politician, said the FAN ID system would be superfluous and prohibitive.

“We’re now living in strange times. We’re all experiencing a pandemic. People are divided into vaxxers and anti-vaxxers; those who are ‘for’ or ‘against’ QR codes. The introduction of a FAN ID is another small differentiation between people. A small but important thing,” Pevtsov said.

Popular rapper Basta – the owner of football club SKA Rostov-on-Don in the Russian third tier – is another to have spoken out against the plans.

CSKA manager and former player Aleksei Berezutski said he was against the idea after his team's match in Samara this weekend.

Meanwhile, the Russian Premier League has issued a statement saying it is making efforts to resolve the situation, but noting that fans "are the backbone of football."

It’s not just football that has seen protests. Fans at a CSKA Moscow ice hockey game during the week acted in solidarity by leaving the stands. In St. Petersburg, Zenit football fans moved on to watch their club’s basketball team play at a nearby arena before quitting the stands again.

Fans have also shown a unified front in face of the authorities before. Back in 2019 there were similar actions across Russia after large numbers of Spartak Moscow fans were detained in St. Petersburg amid accusations of heavy-handed policing.

Then, as now, supporters across Russia showed they are not averse to putting aside rivalries for causes which they feel transcend tribal allegiances.

This time, though, the movement seems set to simmer even more intently as the FAN ID debate nears a conclusion.

As Zenit fans departed their match on Friday, a banner was left behind reading: “A stadium is not a prison – a fan is not a criminal.”

For many Russian football fans, that message perfectly encapsulates the anger they feel.

Trouble in the Eurasian heartland: Kazakhstan is pushed to the brink

The growing significance of financial literacy in India – Gaps and opportunities