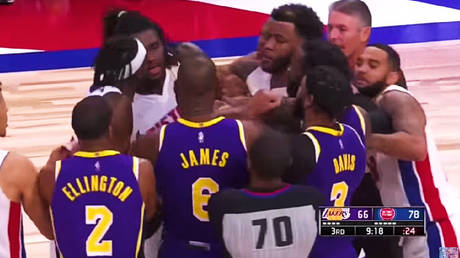 Basketball icon LeBron James received his second ejection in 19 NBA seasons on Sunday after being ordered off the court following a bloody confrontation with a rival while playing for the LA Lakers against the Detriot Pistons.

The incident occurred early in the third quarter of a game played at the Pistons' Little Caesars Arena.

Home player Isaiah Stewart was called for a foul before tussling with James for a rebound.

And when James's left elbow and hand made contact with Stewart above his neck, Stewart was sent into a blind rage with a bloodied face while having to be restrained.

The Lakers and Pistons had to be separated multiple times after this play between LeBron and Isaiah Stewart. pic.twitter.com/im0o7fXeoI

Going for James more than once, Stewart knocked over some of those attempting to hold him back from striking the 36-year-old, who attempted to apologize to his much younger foe.

The first time James was sent for an early bath was in November 2017, while still playing for the Cleveland Cavaliers.

On that occasion, James got into an argument with referee Kane Fitzgerald during an encounter against another former team, the Miami Heat.

Figures from both the Lakers and Pistons suggested that he is not a troublemaker following the 121-116 win for the visitors.

He did.. soon as he realised how much blood was on him... Then he wasn't waiting for no-one to hold him and LeBron was dobbing real quick ???? pic.twitter.com/mpBOE27Alf

“Everyone in the league knows LeBron isn’t a dirty guy,” said his teammate, Anthony Davis.

This incident started a wild scene in Detroit. pic.twitter.com/QErbBgE3dP

“He felt like he had been cheap-shotted across the brow. I’m not even sure he knew who hit him.”

While Casey stressed that Stewart “needs to just keep his head and not get a reputation,” some have demanded that his time in the big leagues should be brought to an abrupt end.

“I'm just going to be real with you here: pack all your sh*t, pack your winter jackets and boots because your ass is about to be traded to Budapest somewhere,” said three-time NBA All-Star Gilbert Arenas on Instagram.

Never seen anything remotely that dirty from LeBron James. It was the equivalent of hitting Stewart with his fist. Lotta blood. Just a shocking reaction by LeBron, who then spread his hands, moved toward Stewart like he didn't mean it. Stewart wasn't having it. Can't blame him.

The more I watch the replays, the more I see relief on the faces of the Lakers after Pistons players and coaches finally subdued Isaiah Stewart. No Laker player looked like he wanted any part of Stewart's rage, starting with LeBron.

“I don't know what type of blood got in your eye but you can't charge at the king like that on TV. You will be drug tested just to make sure that rage ain't drug-related.

“We don't do that in the NBA; you probably haven't read the memo on fight attempts in the NBA.

"Don't square up with [James], ever. Some can say this was attempted murder. If you think I'm bullsh*tting, ask [NBA star] Enes Kanter [who mocked James when he was ejected in 2017] – he got too close to the king and the Turkish president has been trying to catch his ass ever since.”

Respected pundit Skip Bayless said he had “never seen anything remotely that dirty" from James.

“It was the equivalent of hitting Stewart with his fist," he added. "Lotta blood. Just a shocking reaction by LeBron, who then spread his hands, moved toward Stewart like he didn't mean it. Stewart wasn't having it. Can't blame him."

Bill Simmons, the founder of sports network Ringer, quipped that Lakers announcers were “doing an incredible job of blaming Isiah Stewart for attacking LeBron’s elbow with his face”.

Damian Lillard: 'I don't believe in the ring of bust thing'

A homeowner tried to smoke out a snake infestation. His house burned down.