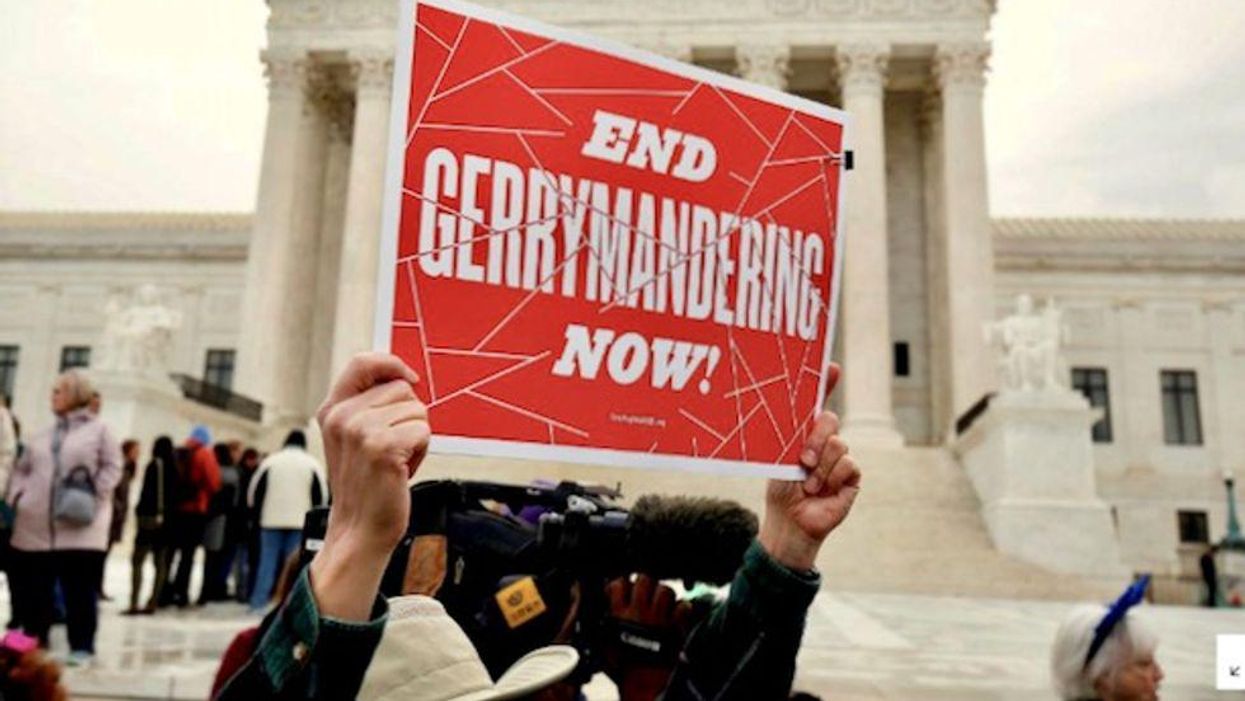 Rows of framed photographs line an office wall at the Korean Community Center, black-and-white images giving way to color over time. Pictures of veterans groups, celebrations and 32 of the center's past presidents capture almost 60 years of community. Since the early 1960s, the center has been the beating heart of the Korean presence in the Spring Branch neighborhood of northwest Houston.

Language and culture are studied in classrooms of the building the organization moved into in 2011. Political groups work out of its offices, striving to give voice to the ever-growing population of native and immigrant Asian Americans who have planted roots here.

But an invisible line now separates the center from its people. When Texas lawmakers redrew congressional maps following the 2020 census, they split up Asian American populations in both Harris and Fort Bend counties.

One district line, winding between a local car wash and bar, severs most of the Korean neighborhoods, grocery stores, restaurants and a senior center from the community center itself, which now hangs on the edge of one congressional district while most of its members reside in the next district over.

"It's like (lawmakers) don't even know we are here," said Hyunja Norman, president of the Korean American Voters League, who works out of the center. "If they were thoughtful, they could've included the Korean Community Center in (our district). But it's like they are ignorant of us, or they just don't care."

As the Asian American and Pacific Islander population has grown and continued to mobilize politically, especially in the midst of rising hostility and targeted attacks, the community's desire for representation in Texas and U.S. politics has become stronger. But many now feel their political aspirations became collateral damage in Republican efforts to draw political districts designed to preserve partisan power.

Although they make up only about 5% of Texas' total population, Asian Texans accounted for a sizable portion of the state's tremendous growth over the past decade. Nearly one in five new Texans since 2010 are Asian American, according to the census. They were the fastest-growing racial or ethnic voting group in the state, increasing from a population of about 950,000 in 2010 to nearly 1.6 million in 2020.

The previous boundaries for these two districts, CD-9 and CD-22, occupied roughly 1,200 square miles across three counties. The Asian population made up a third of Fort Bend County's population growth in the last decade.

The number of new Asian Americans in Texas surpassed both the Black and white population growth over the past decade, but fell behind Hispanic Texans. Vietnamese is the third most-spoken language in Texas, and the half of Texas households that "speak English less than very well" speak in Asian and Pacific Islander languages, according to a report from the Texas governor's office.

Those numbers gave hope to Texans like Norman that when lawmakers met to divvy up political representation, the redistricting process might yield stronger opportunities for people who look like her to be elected. Instead, Asian Texans lost voting strength around Dallas and Houston, where their numbers have grown the most.

Texas has never elected an Asian American or Pacific Islander to Congress and has had very few representatives serve in the Texas Legislature.

Severing it from its neighborhood, Norman said, exemplifies why representation matters. But the move is more than symbolic.

"But we have to keep going, keep trying," Norman said. "Who is going to stand up for our community?"

During the pandemic, Asian American and Pacific Islanders nationally found themselves the targets of increased hostility. A Pew Research Center study found that 58% of Asian Americans said people more commonly expressed racist views toward them after the pandemic began.

A shooting in Atlanta, Georgia, in March that killed eight people, including six women of Asian descent, only added to the fear.

In Fort Bend County — which has ranked as the most diverse county in the country multiple times — Lily Trieu's parents grew scared of even routine errands like grocery shopping or filling their gas tanks. They were afraid to wear masks in public.

And when Asian Americans in the U.S. House of Representatives introduced a resolution condemning the Atlanta shootings, almost every Texas Republican voted against it, including Fort Bend County's U.S. Rep. Troy Nehls.

"This is why representation matters," Trieu told Texas lawmakers when she testified at redistricting hearings. "This is why splitting our community to dilute our votes is directly denying our opportunity to receive that representation."

In 2020, Indian American Sri Preston Kulkarni ran for Congress against Nehls in Congressional District 22 and many believed the race could be close as Kulkarni worked for a radical turnout from the community, sending out campaign materials in more than 10 languages.

But Kulkarni lost by more than 7 points.

The odds of a candidate like Kulkarni winning a congressional seat are now even slimmer. Asian American populations in Fort Bend County have been cracked and packed between three congressional districts — CD-7, CD-9 and CD-22 — by drawing new lines straight through heavily Asian neighborhoods.

Previously, more than 9% and 11% of the eligible voter populations in CD-7 and CD-9, respectively, were Asian American. But under the approved plans, CD-7 would increase to 17% Asian American population, covering Houston suburbs, while CD-9 would decrease to 9% Asian population — shifting the majority into one district and lessening its power in another.

CD-22 also now includes all of Sugar Land, which is the most Asian town in Texas.

Similar manipulations took place around Dallas. In Collin County, lawmakers approved a map for CD-4 that takes most of the Asian community across Frisco and Plano and attaches it to a district stretching north to the Oklahoma border.

Asian American voters, who would have made up 10.8% of the vote in their old district, comprise just 5.6% of their new one.

It still didn't feel like it was enough, Parbhoo said.

"It makes it really difficult for the (South Asian) community, an emerging political entity, that we haven't had years of experience (with redistricting)," Parbhoo said. "As soon as a map comes out, then I'll have to try to explain it to my community, like, 'This is what's not fair. These are the numbers.' Everything moves so fast that the process doesn't really allow for people to absorb it and to be able to ask questions."

Ashley Cheng, lead organizer of the Texas AAPI Redistricting Coalition, also testified multiple times as lawmakers redrew voting districts and said the community has various issues at stake that a continued loss of representation will exacerbate.

Cheng said translating documents for Asian American voters is vital for the community to participate in voting. She said during the winter storm, many emergency alerts were only in English and Cheng's mother, who does not fluently speak English, was left without information at her house.

"We are in a time of history where we're really rising up as a community and making sure that our political voices are heard," Cheng said. "Part of that is because our lives are being threatened. There's been a heightened sense of Islamophobia in the last few years, heightened anti-Asian hate because of all of the political rhetoric around COVID. We have so much in common in a need for representation."

Despite people of color accounting for 95% of population growth in Texas over the past decade, Republican Texas lawmakers approved new congressional maps increasing the power of white voters.

This year is the first time in almost 50 years that Texas' congressional maps won't face federal oversight, or preclearance, to catch intentional discrimination against voters of color.

But marginalized communities are not voting monoliths. Across hundreds of cultures and languages, Asian Americans have switched between parties depending on social and economic interests. As the most economically divided group in the U.S., according to a 2018 study from the Pew Research Center, the gap in the standard of living between those making the highest and lowest incomes in the group nearly doubled from 1970 to 2016.

Although numbers show most Asian American voters nationally lean toward Democrats, a loud but small minority has aligned with far-right Republicans, leading to events like an Indian American car rally for former President Donald Trump in Houston.

Norman said many Korean American seniors also vote straight-ticket Republican, but she doesn't care how they vote as long as they are able to — beyond language barriers and technology hurdles.

"Clearly, they just make assumptions about where we stand politically because of the way we look," said Dona Murphey, a Korean Texan who ran for a local school board position in 2019.

As the cases swirl through state and federal courts, experts say gerrymandering that specifically targets Asian American communities may not violate the law.

"One thing that distinguishes Asian Americans from other communities of color is courts haven't formally protected them in terms of redistricting," said Joshua Blank, manager of polling and research at the Texas Politics Project. "Mapmakers have to be careful in distributing African American and Latino populations, but they're not required to do so for the AAPI community."

Blank said this difference partially stems from the community's small fraction of the population, but it also comes from stereotypes like the model minority myth.

"Asian Americans are not viewed as a minority population in need of protection at the voting booth," Blank said.

But the Texas Legislature would have had 9 AAPI members rather than 4 in 2021 if it accurately reflected the state's demographics.

Norman said much of the community's representation currently is local, from city council to school board positions, where they can have a more direct impact. Many Asian Americans have announced running for local office as primary elections are on the horizon, including Zohaib Qadri for Austin City Council.

"The community that we're building and growing through this work really does give me a lot of hope, despite how much we're being shut down in this process right now," Cheng said. "I don't think there's ever been a time that the Texas Legislature has heard from so many AAPI's, from such a diverse coalition from across the state, across ethnicities and languages and cultures from our community, so I'm proud of that."

A Cannon With Wings: A Pilot Remembers Flying the Mighty A-10 Warthog

For Safety’s Sake Don’t Do This: Let A Clueless Dad Take A Kid Climbing