A NEW Covid variant spreading through the UK is less likely to cause symptoms in infected people.

A Delta subvariant – AY.4.2 – made up 12 per cent of all cases in the country in the last study running up to November 5.

The new strain, which has been in the UK for a few months, is thought to be growing at a rate of 2.8 per cent a day.

It is believed to be more infectious than the original Delta, but is thought to be less symptomatic.

While this is good news for people who catch it, it does mean Brits could potentially be ill, spreading the virus and have no idea they are infected.

Scientists at Imperial College London found 66.7 per cent of AY.4.2 cases showed up as symptomatic, compared to 76.4 per cent of Delta original cases.

The classic Covid symptoms, such as a fever, persistent cough and a loss of smell or taste were seen in a third of subvariant cases, but in 46.3 per cent in parent Delta infections.

When the new strain first emerged, Professor Francois Balloux, director of the University College London Genetics Institute, said: “The tests in the lab are still underway – from a purely bioformative point of view it’s not obvious how it could achieve that [escape vaccines], so I don’t expect it to be able to escape vaccines more.

From cancer to asthma, the new treatments, meds & jabs making us healthier

“It’s so transmissible it can often break through, not because our immune system doesn’t recognise it but just because it’s so infected.”

But the subvariant doesn’t currently seem to be able to break through vaccines.

He said: “It is absolutely the case that if people are waiting for symptoms to do a test and to therefore identify that they are infected, and therefore cut back their contacts, being asymptomatic may facilitate transmission for example.

“It is an asymptomatic transmission that really can make the difference between what’s relatively easily containable and what needs vaccination.”

Professor Paul Elliott of Imperial told The i: “We’re not sure why AY.4.2 might be associated with less symptomatic infection, but that might give it a transmission advantage as people carrying AY.4.2. are less likely to know that (as more of them will be asymptomatic).”

It was designated a Variant Under Investigation by the UKHSA last month, with chief executive Dr Jenny Harries saying: “Viruses mutate often and at random, and it is not unexpected that new variants will continue to arise as the pandemic goes on, particularly while the case rate remains high.

“It is testament to the diligence and scientific expertise of my colleagues at UKHSA, and the genomic sequencing capacity developed through the pandemic, that this new variant has been identified and analysed so quickly.

“However, it should serve as objective evidence that this pandemic is not over.”

A virologist at the University of Heidelberg claimed genomic sequencing found another offshoot of the subvariant, called AY.4.2.1.

It is said to make up between one and four per cent of samples in England, and may be 1 per cent more infectious than AY.4.2.

Earlier this year Downing Street said it was keeping a close eye on the AY.4.2 coronavirus variant but insisted there is no evidence it spreads more easily.

Last winter the country was forced back into lockdowns after the Alpha variant began to rip through Britain. 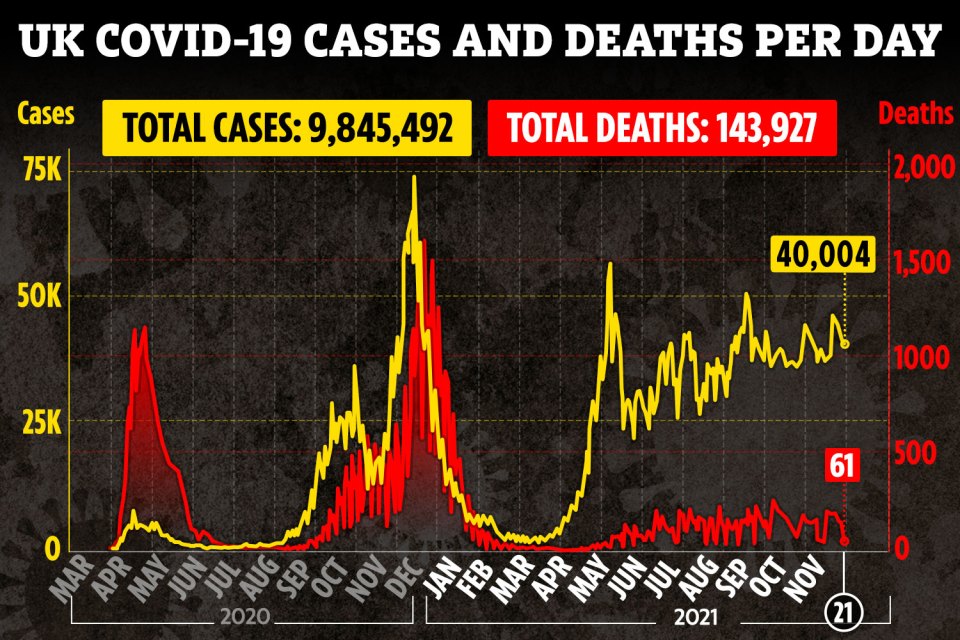