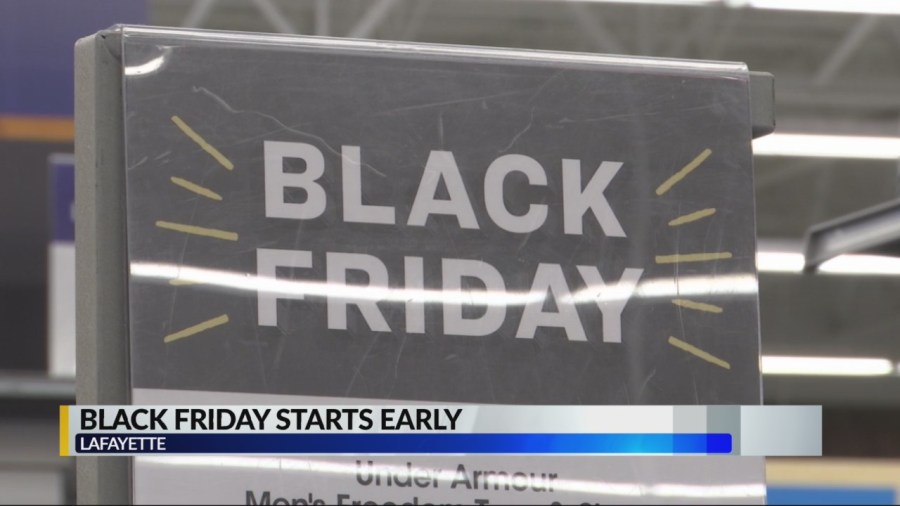 LAFAYETTE, La. (KLFY) -- Black Friday is starting early, which means carts will be filled with merchandise as people are starting their Christmas list shopping and looking for special deals.

"We are Black Friday shopping. We heard that we were supposed to come early because it's not going to be like it was before. So we got a good head start," said Angie Kling.

Stores like KOHL’S and Academy Sports and Outdoors are starting their Black Friday sales early.

"We actually have our hot deals starting today. We have a lot of buy-one-get-one half off,” said Nicci Anderson, Soft Lines Manager, Academy Sports, and Outdoors.

Many of the deals will drop on Black Friday. Some of those hot deals are treadmills and a lot of sales from cooking items, games, and apparel.

"It's regularly $1299 for $649 that's a really good deal,” mentioned Anderson about the treadmills.

"It goes up to 50% off fun-on-wheels which are bikes, scooters, rollerblades, hoverboards,” added Anderson.

On Black Friday Academy Sports and Outdoors will be open from 5 A.M. until 11 P.M. There is also online shopping available with the Black Friday deals.

"For my grandbabies, I just try to see if it's something they like to ride on. Bicycles or other little kinds of big cars they enjoy doing that. Whatever deals I can get for that, that's what I'm looking for,” said Sharon Washington.

For many shoppers, it is nice for things to feel normal again.

"It's a little bit different this year but we're excited to get back into some normal things again,” said Kling.

"It's just nice to be able to shop without covering your face,” added Kling’s mother.

So get your alarm clocks ready because Black Friday is beginning and you don't want to miss out on special deals.

What is the US National Archives?