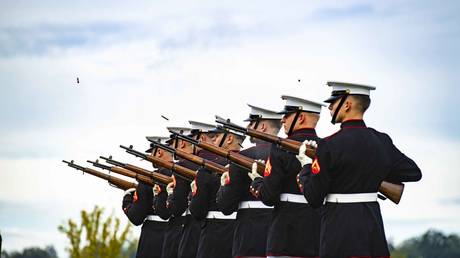 The Marines are on course to be the least vaccinated US military branch. Newly-released data shows that up to 10,000 Marines are poised to miss the deadline to receive the Covid-19 shot.

With the November 28 deadline looming, around 91% of the 181,000-strong force have been fully vaccinated, Reuters reported, citing a statement put out by the Marine Corps on Sunday.

Around 94% have been partially vaccinated, and while there is a chance that some of the late vaccinees will be considered fully-vaccinated by the Sunday deadline, it appears that many will not. The Washington Post reported that “up to 10,000 active-duty Marines” will likely fall into the latter category.

This means that the Marines’ vaccination rate is lagging behind those of the other military branches. The Navy boasts the highest rate, with 96.7% of active-duty service members fully vaccinated. The Air Force is not far behind (96.4%). The Army, with its deadline set for December 15, has already reported a 92% vaccination rate for active-duty personnel, according to Reuters, citing an Army spokesperson, and around 95% of its members have been partially vaccinated.

It is unclear how many Marines who are reluctant to receive the Covid shot are seeking exemptions, whether on medical, religious, or administrative grounds. The latter exemptions refer to “logistical considerations” and are designed to be short-term.

The Marine Corps is conducting a publicity campaign to convince those refusing the shot to comply.

Earlier this month, four-star General and Marine Corps Commandant David H. Berger released a video with a personal appeal. “We need you to get vaccinated, we need every single Marine in the unit to be vaccinated. We don’t have extra Marines. We are a pretty small force. We have to make sure that everybody on the team is ready to go all the time. That’s our job.”

READ MORE: US to deploy ‘cyber Marines’ on future battlefields

The message apparently fell on deaf ears, as the vaccination rate has effectively been the same since November 8, when the video was released, the Post noted. The Marine Corps previously said that service members who refuse to be vaccinated without a valid reason will “be processed for administrative separation” or booted from the force.

Growing the grassroots in WA