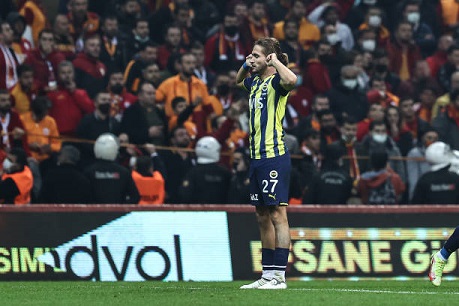 Portuguese midfielder Miguel Crespo picked the most remarkable moment to score his first goal for Fenerbahce, producing a superb stoppage-time winner to earn victory over rivals Galatasaray in Turkey.

The 94th-minute strike by Crespo, who arrived over the summer from Estoril, settled a typically tense Istanbul derby and relieved some pressure on Fenerbahce’s Portuguese boss Vítor Pereira.

The Intercontinental Derby, regarded as the biggest game in Turkish football, is known for being a heated affair and the game saw five bookings each as well as a late red card for Fener’s Marcel Tisserand. With the match level at 1-1 at the time of the sending off on 82 minutes, Pereira’s visitors could have been expected to settle for a draw.

However, deep into stoppage time Crespo grabbed all three points and opened his account in memorable fashion. The 25-year-old’s crisp finish hit the inside of the post before nestling in the opposite side-netting, with Crespo putting his fingers in his ears in celebration having silenced the Nef Stadium.

"I am very happy to have scored my first goal in such a big game at this big club,” Crespo said after the match. “It was really important to get the 3 points today. The most important thing for us was to get 3 points because we were getting bad results and we wanted to get out of this as soon as possible. We’ve been working really hard, and we knew we would come back one day. We want to continue this way.”

On his celebration, the French-born match-winner added: "Of course I was very happy because it was a very important goal. And because of the situation we were in, the happiness of that moment shot out. What we need to do now is to stay focused.”

We showed we are a family - Pereira

As for Fener boss Pereira, a much-needed result after a recent slump which saw his position called into question. The team recently went four league matches without victory, with many questioning Pereira’s tactics and handling of star players such as Mesut Oezil.

Pereira is in his second stint at the club and retains the strong public backing of club president Ali Koç. However, there is little doubt a victory against Fenerbahce’s biggest rivals is a much-needed boost for the former Porto boss.

“First of all, it was a difficult match,” Pereira said in his press conference. “The most important thing for us today: we wanted to show that we are united on the field; that we are a family. We wanted to show our president, management, team, staff and supporters that we are a family on the field today, and I think we showed that in the best way today. This is the most important thing for us. We definitely deserved the win. I am very happy for our president, our club and our fans.

“We must continue to work in the same way. We believe in hard work and we have many matches ahead of us. We will fight in every match. Our goal is the championship. Other teams will lose points. There will come times when we lose points, too.

The most important thing for us is to display a stable image and show that we are together. Only in this way can you become a champion. It was very important for us to give hope today. As a family, sometimes you have to suffer, but for us it's a day to be happy. We got 3 points; we want to continue to fight like this.”

I went inside an exclusive first class spa onboard an Emirates Airbus A380 and saw why wealthy travelers pay a small fortune to live well at 35,000 feet