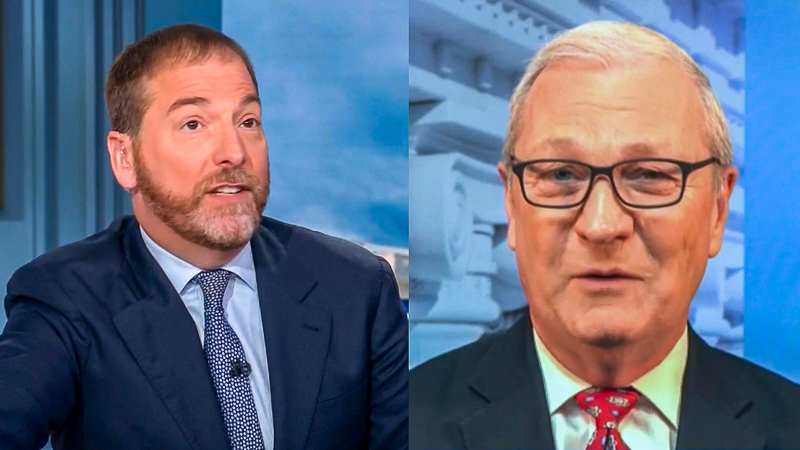 NBC host Chuck Todd did not push back on Republican Sen. Kevin Cramer (ND) on Sunday after he claimed that Democrats have "gotten comfortable with anti-Semitism."

"Now we're getting forced with this big crazy socialist agenda," Cramer told Todd, "driving up inflation and driving up our debt and our deficit coming at us by the Democratic Party that's gotten very comfortable with anti-Semitism and socialism."

"I see what you're worried about on the left," Todd replied before pointing out that Republican Rep. Paul Gosar (AZ) was censured last week for tweeting a cartoon that showed physical violence against Democrats.

"What Paul did probably wasn't right," Cramer demurred. "As you know, I did an op-ed criticizing Marjorie Taylor Greene. I've never met the woman but her rhetoric early on -- I just want to make sure that the party was distanced from that."

Cramer went on to compare Gosar's violent video to comments Rep. Ilhan Omar (D-MN) has made about Israel.

"Ilhan Omar spews this gross anti-Semitic language and she barely gets a slap on the wrist for that," he complained. "Again, we have polarizing parties. At least parts of our parties are so polarizing and I think there's a tendency to run to those corners rather than stand in the gap and have a better conversation."

Todd then ended the interview: "You do accept our invitations and I appreciate it."

Sip and Save: These Are Best Cheap Coffee Makers on the Internet