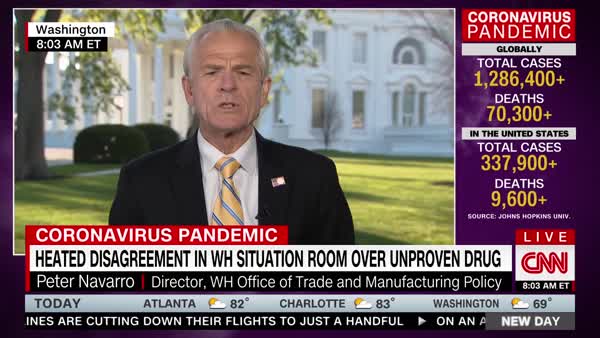 The newly formed House Congressional Committee investigating Trump, and his incredibly disastrous response to the pandemic, issued its first two subpoenas, one of which went to Peter Navarro.

Navarro was one of the biggest sc*mbags working for Donald Trump, whose credentials seemed to morph every single day, is now being called to face the music over his immoral and dangerous antics.

He was hired by Jared Kushner to advise the Trump administration about China.

Navarro was a fixture on Fox "News" and Fox Business during Trump's reign. After Dr. Fauci's approval ratings grew, his job became attacking Dr. Fauci. When asked what made him a medical expert, Peter claimed he was some sort of social scientist.

Politico is reporting, "The committee is probing whether former Trump administration officials mishandled the federal response to the pandemic, specifically whether it interfered with its own health agencies’ work and how it attempted to change its messaging to downplay the threats posed by the virus."

It's not a question of whether the Trump administration mishandled federal response to the pandemic. It's how often, how many times, and what the consequences were that matter.

As usual, Navarro is refusing to cooperate, saying that instead, he's a sending a copy his new book, explaining why it's another witch hunt.