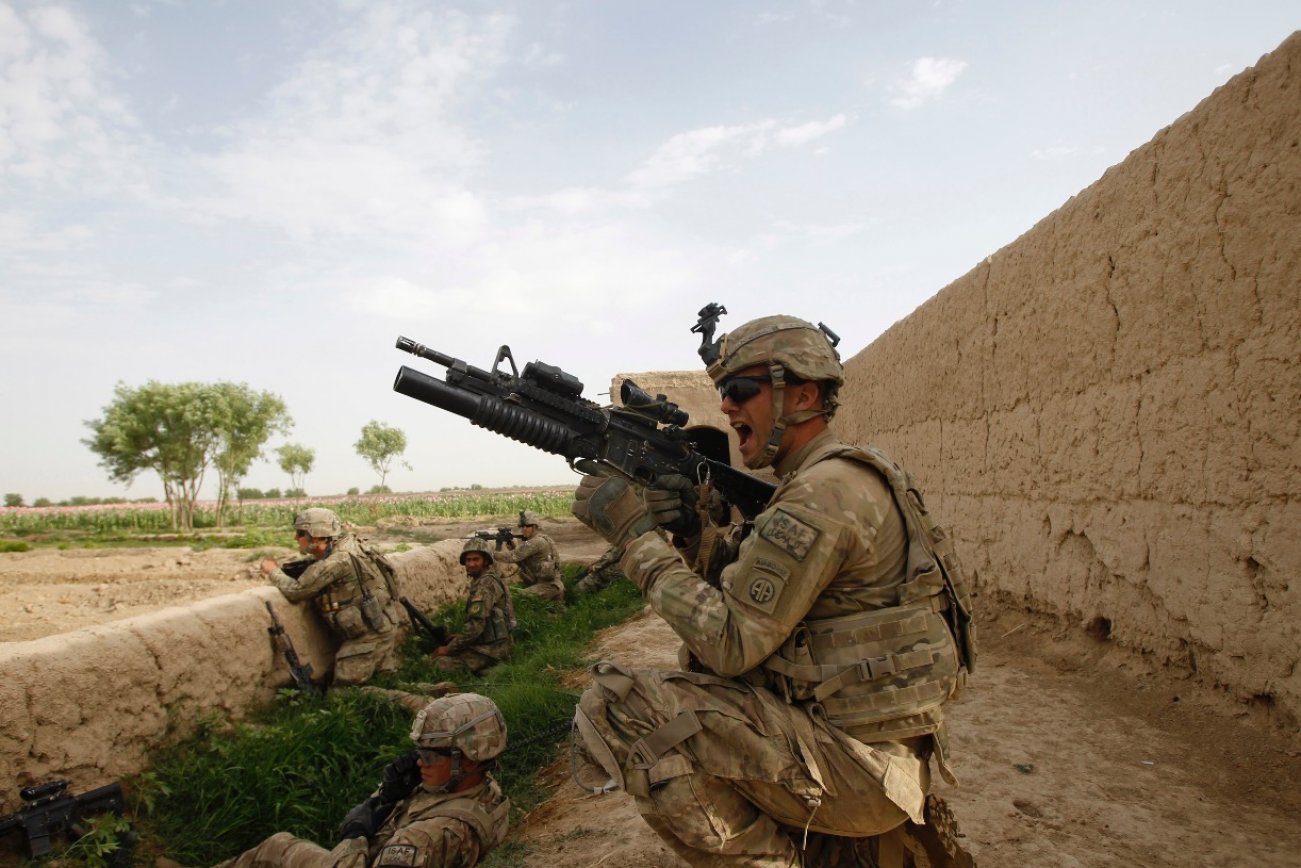 Infantry platoons bristle with direct-fire weapons, but everyone loves a grenade.

Here's What You Need to Remember: Simple in design, with a wooden stock — typically black walnut or birch, though plastic eventually was an option, too — the M79 weighs about the same as an M16, and at two and a half feet in length, when not cut down, it’s man-portable. But it only fires one round at a time.

Infantry platoons bristle with direct-fire weapons, but everyone loves a grenade. Grenades give ground troops the ability to send a big boom of fire and shrapnel over a wall or hedgerow, inside a window, or wherever else you can wing one. The catch, of course, is that a hand grenade’s range tops out at roughly 40 meters, depending on whether the grenade-hurler tried out for the minors before joining the military.

Enter the ubiquitous grenade launcher. Today, that simplest of standoff weapons is often mounted in the turrets of armored vehicles; lugged along by a dog-tired grunt in the form of a man-portable 15-plus pound system; or most of the time, just affixed to the underbarrel of an infantryman’s rifle.

But who cooked up the idea of a gun that burps explosive grenades — and how’d they end up on so many M4s and M16s in the first place?

Glad you asked. Turns out grenade launchers have a rich century’s worth of weird history, from the earliest steampunk-looking trench-warfare crossbows and bomb-apults of World War I.

The earliest serious incarnations were rifle grenades, which were exactly what they sounded like: special charges meant to be mounted on the business end of your rifle barrel and shot off, at five times the range of their handheld counterparts. A rifle grenade could be fired in a plunging arc overhead, and unlike other indirect fire weapons like mortars or artillery, they could go wherever a rifleman went — anywhere — as this 1914 edition of Popular Mechanics notes.

Throughout World War I and World War II, American infantrymen relied on a wide variety of rifle grenades, according to U.S. Grenade Launchers, Gordon L. Rottman’s historical account of the weapon system published last September. The armaments were a mainstay of American combat troops for decades, but the weapons weren’t without shortcomings: The more distant the target, the less accurate the grenades became, and their range often maxed out around 200 meters — leaving a lot to be desired.

In the early 1950s, weapons developers at the Army’s Ballistic Research Laboratories at Aberdeen Proving Ground in Maryland were hard at work on a new type of grenade inspired by experimental German anti-tank munitions during World War II. The program was called Project Niblick — named after a 9-iron golf club, to highlight the similar arcing trajectories of a golf ball and a grenade in flight, according to Rottman.

By 1953, Project Niblick had its ace in the hole: the 40mm grenade. In the years that followed, that first “40 Mike-Mike” birthed a generation of aluminum-encased ordnance for a variety of launchers and payloads, from high explosives to buckshot to white phosphorous to parachute flares and non-lethal rounds.

By turns dubbed the “bloop tube” and “blooper,” owing to the sound made as a 40mm is launched from the barrel — or “thump-gun,” because of the noise it makes when said round lands — the M79 was created by Springfield Armory in Massachusetts in the 1950s. The idea was a weapon that could lob a high explosive munition up to 400 meters — though the effective range for most launchers comes in at around 350 meters, or less — and with no more recoil than a 12-gauge shotgun.

This article first appeared in 2017 and is being reposted due to reader interest.

The break-action shotgun-style launcher was officially approved by the military in 1961 and immediately began making its way into the hands of U.S. troops. Though it mostly saw service in Vietnam — and between 1961 and 1971, roughly 350,000 “bloopers” were manufactured — the M79 didn’t vanish after the war; the “thumper” even did a stint of field-testing in Iraq as an anti-IED system during the early days of Operation Enduring Freedom, where its range provided enough “standoff distance” to detonate suspected roadside bombs with a well-placed 40mm HE round.

Simple in design, with a wooden stock — typically black walnut or birch, though plastic eventually was an option, too — the M79 weighs about the same as an M16, and at two and a half feet in length, when not cut down, it’s man-portable. But it only fires one round at a time.

The military had also tested out the T148, a semi-automatic grenade launcher that could lob three rounds in the air before the first hit the ground. But its side-feeding magazine often snagged on a GI’s equipment, became tangled in heavy brush, or got gummed up with debris and muck, causing jams, according to Rottman. After minimal field testing, that prototype got scrapped in 1960.

The need for a standalone launcher that could get more grenades downrange ricky tick without jamming was met by the beastly 8-pound pump-action China Lake grenade launcher, which had a capacity of three 40mm grenades — though, according to Rottman, veteran grenadiers figured out a way to load an additional two rounds, one in the chamber, and a second onto the elevator plate, which carries the munitions from the feedway to the chamber. Created at Naval Weapons Center in China Lake, California in 1968, the weapon was fielded mainly by Navy SEAL detachments in Vietnam.

The China Lake was a one-trick pony, though: It was prone to jamming when any 40mm rounds other than high-explosive were used. Only a few of the weapons were made, likely between 16 and 50 — that’s as high as the serial numbers go — and just four are known to remain intact, safely stowed in museums, Rottman writes.

Getting the “bloop” and the “bang” in one boomstick

In May 1963, the U.S. military sought to field an under-the-barrel grenade launcher to complement the newly designed M16 assault rifle, War Is Boring notes. After a few missteps with the XM-148 — a finicky rifle attachment that was inaccurate, hard to clean, and prone to breaking — the military found the M203.

The first M203s reached U.S. troops in Vietnam in 1969, where they were well received: The launcher was rugged, reliable, and less likely to snag on heavy jungle growth than the XM-148. For the first time since the rifle grenades of World War II, infantry squads and fire teams had the firepower of a grenade launcher without sacrificing a rifleman — or burdening a grenadier with a heavy weapon and ammunition.

For the next half-century, the M203 performed its role admirably: taking out groups of enemies, providing a heavy base of fire for advancing or retreating troops, and depending on the grenade used — marking critical targets or locations.

The new kid in town​

But in the last decade, the M203 has given way to the M320. The advanced replacement first made its hands to the Army in 2009, and this year the Marines got their first batch following testing during Sea Dragon 2025, an 18-month initiative during which the Corps was trying out new weapon systems and tactics, Task & Purpose reported in June.

Both the M203 and the M320 can lob 5 to 7 rounds per minute and are effective against area targets up to 350 meters away. The most significant difference is the M320’s ability to function as a standalone weapon when broken away from a service rifle.

Though underslung grenade launchers have the niche of “squads artillery” pretty well covered, new advancements are continually being researched — like smart grenades that detonate inside of a doorway, and an M320-launched guided missile.

In 2005, the Marine Corps decided to procure the M32, a six-round rapid fire grenade launcher that looks like a giant’s revolver. The need arose during the Second Battle of Fallujah in 2004, when Marines on the ground concluded that they needed a way to sling boatloads of HE into congested and enemy-occupied buildings, quickly, according to Rottman. The launcher, which was fielded in 2008 and weighs in at 18 pounds with a full payload, was seen less as a replacement to its underslung siblings, and more as a way to beef up an infantry squad’s firepower.

Given how far grenade launchers have come — from a medieval-type crossbow to a single shot 40mm bloop tube to a cornucopia of multishot hand cannons and underbarrel ’nade launchers —  it’s hard to know exactly where they’ll end up. One thing’s certain though: these “thump-guns” aren’t going anywhere anytime soon, having blooped into grunts’ hearts the world over.

- 7 Veteran-Friendly Manufacturers That Are Hiring

- The 6 Types Of Contractors You Encounter Overseas

- Here’s How Marines Fared On The New Physical Fitness Test

Who is fighting who in Ukraine?