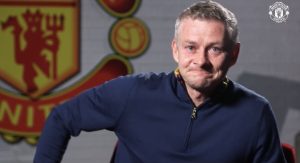 Manchester United announced this morning that Ole Gunnar Solskjaer is no longer manager of the club, following a period of weeks which saw some dreadful performances and results.

With him uninterested in giving interviews to the press, Solskjaer has spoken to the club’s official site to say his farewell to the fans.

You know what this club means to me and what I wanted to achieve here. For the club, for the fans, for the players, for the staff. I wanted us to take the next step to challenge for the league, to win trophies and I only think it’s right that it comes from the horse’s mouth. I don’t want to answer all… there’s going to be journalists asking me about interviews but no, I’m not going to do any interviews. I want to get it out there, I’m going to leave by the front door, because I think everyone knows I’ve given everything for this club. This club means everything to me and together we’re a good match, but unfortunately I couldn’t get the results we needed and it’s time for me to step aside.

Michael Carrick will take charge of the next few games until an interim coach is brought in until the end of the season. Solskjaer is proud of the squad he has developed and has high hopes for their future.

The environment is fantastic, it’s an environment I’m proud of leaving because you have to enjoy coming in here working. I don’t want to pre-empt anything but the two times I’ve left Molde, they’ve won the league the year after, so all the best to whoever takes over – that’s the expectation! I think there is potential in this club. We all love the club, and we all want to see it continue.

Managing United had been Solskjaer’s dream and he has spoken of his pride of having the job. He’s grateful to the continuous support he’s received from the fans.

It’s one of those things you dream of in your life. When you’ve been a player, when you’ve been a reserve team coach, the next job then, the only dream and the only thing you haven’t done is to manage the club, and I have now. It’s been a ball, it’s been absolutely enjoyable from the first to the last minute, so I have to thank all the players because since I came in, they’re top lads, top people. Some have come, some have gone, but all of them, they’ve been such an enjoyable bunch to work with. First of all, I want to thank the board and the owners for giving me the opportunity because it’s not for everyone and I’ve had the opportunity. I’m so honoured and privileged to have been trusted to take the club forward, and I really hope that I leave it in a better state than when I came. I’ve made great friends, I’ve reconnected with some great friends, new staff coming in I’ve become really good friends with. The other staff that was here when I was there, we’re good friends and we have connected and that’s what it’s about at a club like this. With the fans, the fans have been amazing. From day one at Cardiff until the last one now. [They’ve been] top, and we’ll see each other again.

Solskjaer has reiterated his feelings for the club, that he is a United fan and he’ll carry on supporting the team and the next manager. He became emotional before the end of the interview, with tears in his eyes, and has the faith this team will go on to be successful.

I’ll watch the team of course and hopefully, the next manager comes in and I want to support him. I want him to be successful, hopefully I’ve laid the foundations for that to happen because I know I’m good at what I’m doing. I’m one hundred per cent sure to create a football environment, that’s where I’m good at and at some point, I’ll probably be back [working in football].

I am a fan and I wish the players all the best. There are some very, very good players there, some good people. I’m sure we’ll see them puff their chest out and they’ll go on a run.

As I’ve said to them this morning as well, trust yourselves, you know we’re better than this. We’ve not been able to show it but go out, chest out, enjoy being a Man United player, in the Champions League, on the biggest stage. If and when you win the game, you’re through to the next round, Michael [Carrick] is going to be in charge. Michael, I have the utmost respect [for], I love Michael to bits. I’m becoming emotional now because he’s top. They’ll be fine. I’ll watch them and support them.