A dominant Manchester City performance including a pair of stunning goals resulted in a 3-0 victory against a beleaguered Everton side.

Raheem Sterling opened the scoring before half-time after being set up with an assist of the season contender by Joao Cancelo. A rocket from Rodri arrowed into the top corner after the break to double the lead, before Bernardo Silva added a third late on.

Pep Guardiola made three changes from the derby destruction at Old Trafford. Aymeric Laporte replaced Ruben Dias at the back.

Kevin De Bruyne, absent after testing positive for Covid-19, and Gabriel Jesus also dropped out of the team. Youngster Cole Palmer and Sterling took their places.

Rafael Benitez was still without a whole host of players due to injuries, so named an unchanged starting XI.

There was a rapid pace to the match in the opening exchanges. Anthony Gordon had a shot blocked up one end, while Sterling drew a foul on the right wing at the other.

City looked to make the most of the wings and John Stones sprayed a diagonal ball to Kyle Walker, who’s eventual cross ended with Cancelo having a shot deflect wide.

Sterling looked up for it in what was his 300th Premier League appearance. He left Lucas Digne for dust before chipping for Foden to head narrowly wide.

City continued to attack but Everton stood firm at the back, with Jordan Pickford forced into a good save from a long-range Palmer attempt and then claiming a second shot from Sterling.

Richarlison was needlessly booked for a silly foul on Walker near the City box on the half-hour mark.

The reigning champions thought they had finally forced their opponents into an error when Michael Keane was judged to have fouled Sterling in the box.

But after a lengthy review, VAR sent referee Stuart Attwell to the monitor and he overturned his decision.

A rare Everton attack looked promising as Iwobi got in behind, but Walker caught up and dispossessed him.

And just before half-time, City’s dominance was rewarded with the opener.

Cancelo played a delightful ball into the box with the outside of his right boot. Sterling timed his run to perfection and guided the ball precisely past Pickford. 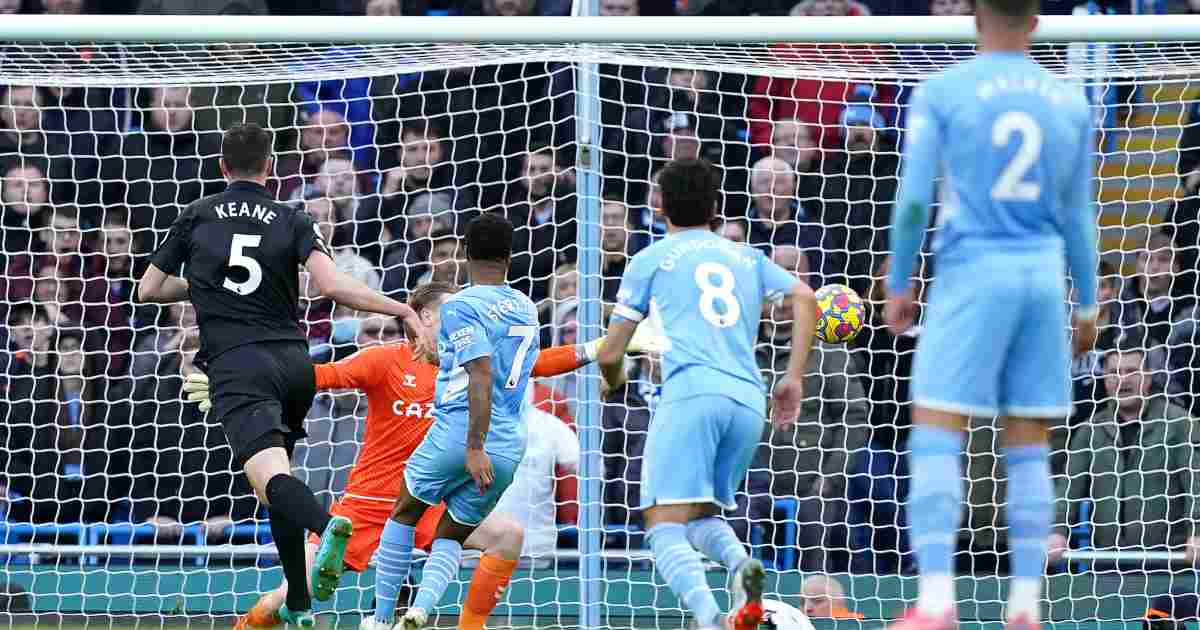 Before the whistle could be blown Laporte was booked for a cynical foul on Andres Townsend just outside his box. Townsend put the free-kick straight at Ederson, which was the Toffees’ first shot on target.

The visitors came out with intent after the break, but Rodri gave their hope of a comeback a big hit when he leathered the ball past Pickford from nearly 30 yards out.

Riyad Mahrez replaced Foden in the first City change and was quick to get into the action.

He would’ve wanted to have done much better with a first-time shot in the box which rolled wide, then claimed a penalty off of Digne which was turned down, before hitting a free-kick on target.

Benitez took ex-City man Fabian Delph, who had pulled out of the challenge for Rodri’s rocket, off for Saloman Rondon.

As Everton looked for a way back into the match, an Iwobi cross sat up invitingly for Richarlison, but his acrobatic effort was mistimed.

Seamus Coleman had a chance to reduce the deficit but fluffed his lines when attempting to chip Ederson. Then Sterling also messed up after Mahrez had squared for him.

But a third goal did come for the home side. Palmer had a shot blocked which fell fortuitously to Silva, who tucked the ball home.

There was time left for 19-year-old James McAtee to make his debut. He looked bright in the final few minutes.

A proper balls-up in the snow – James Calvert