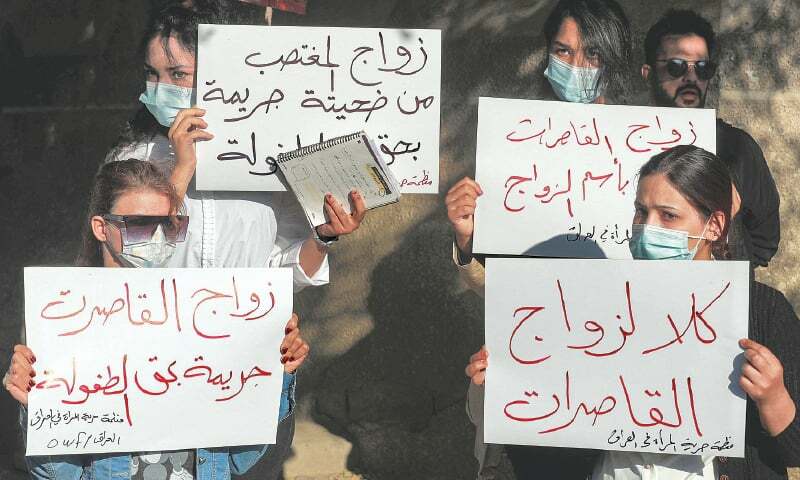 BAGHDAD: An Iraqi court adjourned a hearing on Sunday to allow a man to formalise his religious marriage to a 12-year-old girl, according to a lawyer for the girl’s mother, who opposes the union.

Rights activists protested outside the Baghdad court with banners such as “the marriage of minors is a crime against childhood”, while lawyer Marwan Obeidi said the case had been postponed until November 28.

The legal age for marriage in Iraq is 18 but can be lowered to 15 in cases of parental or judicial consent, according to charity Save the Children.

“Religious marriages are not permitted outside civil or religious courts but these types of marriages still happen regularly and can be formalised on the payment of a small fine,” it said in a recent report.

The mother, who refuses to be identified, said her daughter Israa had been “raped” and that the girl’s father kidnapped her.

But a department of the interior ministry dealing with violence against women said in a statement that it had met with Israa, her father and husband, seen the religious contract, and said she had assured them she had not been coerced.

Child marriage is not uncommon in conservative and rural areas of Iraq, as well as in other Arab countries.

Today24.pro
Manufacturers to Benefit from Lucrative Growth Prospects in the Global Animal Parasiticide Market Turbocharger Market Size and Prediction by Leading Manufacturers According to Its Application and Types Till 2028 325 Train Food! LUXURY STEAK + CHEESE on the Napa Valley Wine Train! Santa Claus Is Comin to Town and more Christmas Kids Songs from LooLoo Kids