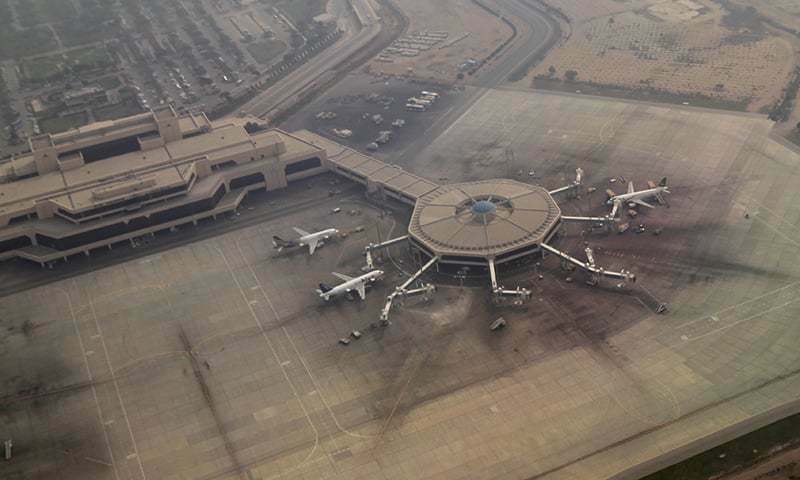 KARACHI: The Federal Investigation Agency (FIA) on Sunday arrested three officials of the Civil Aviation Authority (CAA) and one private person in a case related to illegal occupation of several acres of land near the Karachi airport.

The arrests came after the agency lodged two FIRs against 34 nominated suspects pertaining to illegal occupation of the land whose notice was taken by the apex court in October, FIA Karachi Director Amir Farooqi said.

He said the FIA conducted raids on Saturday night and detained three officials of the CAA — the then senior estate officer Zarin Gul Durrani, the then assistant manager estate Mohammed Yunus, and the then general manager estate Syed Mohammed Kaleem — and one private person named Mushtaq.

Arrests come after two FIRs were registered against 34 suspects

According to official papers reviewed by Dawn, unknown people under the authority of Mr Shah tried to illegally take possession of the CAA land in April on the false presumption that the Survey No. 575 and 576 in NA-Class 153 Deh Mehran has been relocated on the said land, but were stopped by an airport manager.

This case has been registered against 11 people, including the then secretary land utilisation Khalid Mehmood Soomro, the then federal minister Haleem Ahmed Siddiqi and nine others, mostly government officials.

The FIR said Mr Siddiqi claimed that he had purchased five acres of lands in 1993 from Ayesha Mohammed Khan.

Another FIR registered against 23 people — including the then DCs of Malir Mohammed Ali Shah and Qazi Jan Mohammed, the then secretary land utilisation Saqib Soomro who also served as the Karachi administrator, and others — said they committed the identical offences to illegally occupy the airport’s lands in 2018.

Two officials familiar with the development told Dawn on condition of anonymity that the issue arose when Supreme Court on Oct 26 took up the issue of a marriage hall near the airport.

CAA Director General Khaqan Murtaza appeared before it and revealed that he had given an application to FIA in April, stating that around 209 acres of the CAA lands were being encroached but the FIA was not taking any action. The FIA initiated inquiry over illegal occupation of 18 acres of lands.

The officials recalled that a woman, Ayesha Mohammed Khan, purchased 64 acres of lands from private people in Deh Nara Thar district West Karachi. The then officials then relocated the woman’s lands near the airport and allotted her 15 acres of lands. Mr Siddiqi claimed that he purchased lands from the woman.

In another case, Ms Ayesha’s son, the held suspect Mushtaq, gave four acres of lands to one private person, Arslan Khalid, who started constructing boundary wall when the authorities stopped this work.

According to the FIR, the role of four private persons namely Khalid Mehmood, Amir Amin Thara, Abdul Rehman and Amanullah Memon will be “determined during the course of investigation”.

A source in the FIA said one of the private persons allegedly enjoyed support of political masters in Sindh.

The defense has rested in Elizabeth Holmes' fraud trial, and closing arguments will begin next week