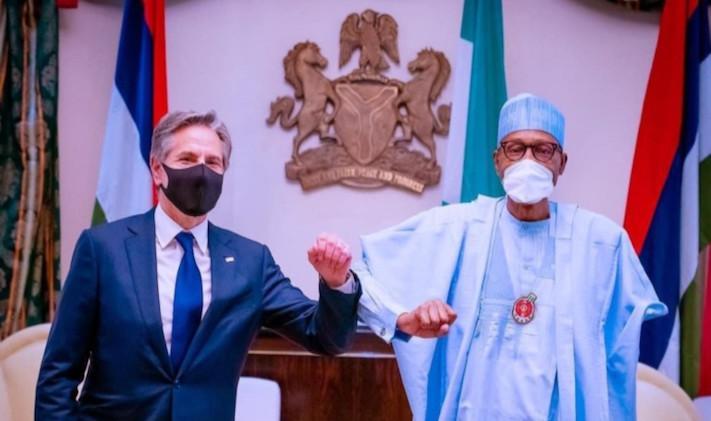 Antony Blinken’s, the US Secretary of State, visit to Nigeria came days after a leaked government panel report indicted the country’s military of killing defenceless protesters in Lagos and when social micro blogging site Twitter is under ban and lawmakers considering a bill to gag the media.

Blinken’s stop in Nigeria as part of a three-nation trip that includes Kenya and Senegal is supposedly to promote democracy and cordial relationship with sub-Saharan Africa. But some of these countries are working assiduously to undermine democratic ideals in their countries and now they have the visit of the top US diplomat to prop up as validation.

In Nigeria, Blinken met President Muhammadu Buhari on Thursday and discussed domestic and regional security, how to deepen democratic values and the government’s handling of the #EndSARS protests against police brutality last year. The subtext of the visit really is how to counter Chinese influence on the African continent, where the largest economy in the region is in bed with the Asian superpower.

This is inferred from the joint press conference in Abuja with Geoffrey Onyeama, Nigeria’s foreign affairs minister, where Blinken said the United States was not focused on China but wanted a “race to the top.”

The Biden administration is seeking to prop up US leadership in Africa through its support of the fight against the COVID-19 pandemic and climate change impacts, but as part of a global competition with a rising China. Unlike the US, China does not allow democracy to get in the way of its interest in Africa. Africa did not matter under the Trump administration, with Biden, it seems Africa now matters but not for the reason many on the continent want.

The top agenda on Blinken’s tour is security because transnational threats from Africa with vast ungoverned spaces provide launch pads for terrorists who could threaten US interests at home and abroad. The Islamic State of Iraq and al-Sham (ISIS) and ISWAP are finding Africa with blundering governments as safe-havens. Rising incidences of conflicts and humanitarian crises in Africa could fuel immigration pressures on governments in Europe and America.

The priority for many Africans though is the exertion of Western powers to prevent government officials from raiding the treasury and hiding their loot in the London property market. It is compelling African governments to set the bar of governance higher than the floor. It is creating easier trade conditions and humane tariff structures that will stimulate local economies rather than aids that get stolen. It is making available life-saving vaccines to poor communities despite the greed of corporations. It is stopping multinational companies from exploiting the continent’s natural resources without care for flora and fauna and the local people. It is helping to curtail the impact of climate change in a region that could suffer its worst impacts.

Blinken’s visit comes under the cloud of Nigeria’s shrinking civic space. Prior to his arrival, the United States removed Nigeria from the list of countries categorised as of Particular Concern for having tolerated “systematic, ongoing, and egregious violations of religious freedom.” Nigeria never belonged on the list as it was only a gambit by former Secretary of State Mike Pompeo to get on the good side of evangelicals in hope that they would reciprocate when he ran for president.

However, this by no means suggests it is uhuru in Africa’s biggest economy. Under Buhari, Nigeria has pursued economic policies that seemed intentioned to achieve self-immolation. Buhari’s government is prioritising paying petrol subsidies when over 13 million children are out of school. It shut the borders for over a year even as food inflation hits double digits. The Central Bank has run out of ideas on how to prop up the naira in the face of declining oil incomes, ballooning debts and out-sized government expenditure.

Under Buhari, Nigeria has become the world’s poverty capital, unemployment has risen over 30 percent and oil production has become so miserable, the country can’t even meet OPEC’s quota of 1.5 million barrels per day. Nigerian doctors, nurses and other professionals are fleeing the land. Entrepreneurs are seeking to move their businesses elsewhere to escape the cudgel of a regulatory space modelled after the neolithic age. Businesses groan under the pain of multiple taxations, as administrators lack the imagination to expand the tax net and shrink the widening informal sector. Pervasive insecurity threatens food security while corruption remains rampant.

The net effect of these economic ideas is rising poverty and widespread discontent. Many Nigerians have taken to the micro blogging site Twitter to express discontent over the government’s policies. Lai Mohammed, minister of information and culture, has on several occasions condemned social media sites calling for their regulation. It got its chance after Twitter deleted incendiary tweets from Buhari’s account to shut down the space. Now, Nigerians tweet by hiding behind a virtual private network.

Perhaps the most sinister effort to shrink the civic space is efforts by the government to muzzle the media.

Lawmakers recently proposed amendments to the Nigerian Press Council Act, which will give the Nigerian president the power to appoint the board and members, who will issue licences to newspapers and online outlets, write a press code, and jail journalists and media houses that violate it.

In a tough economic space, the Nigerian government also exercises undue influence over the media by allocating statutory advertisements to only media outlets that write favourable reports. This is particularly effective as media outlets struggle to survive in an economy where people spend the bulk of their income on food and consider newspapers a luxury.

In the past, Nigeria’s civil society was vibrant and led the fight against military misrule. Under the successive civilian administrations since 1999, they have become docile but were completely defanged under the Buhari government. Analysts say a major factor is that those who usually fund their campaigns are now in power. The harsh economic reality has turned some NGOs into another ‘hustle.’

Only a few including Socio-Economic Rights and Accountability Project (SERAP) are actively engaging the civic space but even then, the government has learned to tune out the ‘noise.’ Government officials act with impunity confident that the president is unaware, and institutions of state have been weakened to the point of irrelevance.

Politicians have corrupted the judicial systems that judges write opinions depending on whose bribe is bigger. Policemen waylay and rob young people carrying a phone, a laptop and a decent car. The Nigerian military is engaged in operations in virtually all the states in the country as insecurity assumes a frightening dimension.

This is the reality that many Nigerians live through and is why many demand that engagements with superpowers must become more meaningful, more impactful rather than just another photo opportunity where critical issues are buried under the haze of diplomatic niceties.

Prior to serving as former President Obama’s deputy national security adviser, Tony Blinken spent two decades in a career related to shaping American foreign policy. In Washington, he is renowned as a pragmatist and a consensus-builder, qualities that would be tested in his engagement with Africa.

Under Obama, he supported the argument that it was in America’s interests to stop Muammar Qadhafi from killing his own people, justifying military action that its consequence has been the destabilisation of Libya and the Sahel region.

Like Kendrick Bourne, Jakobi Meyers Credits Patriots For His Development