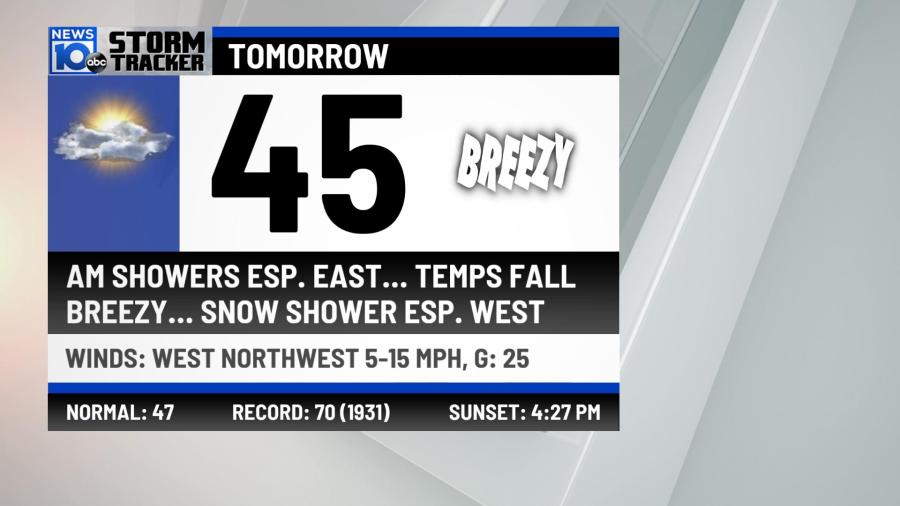 ALBANY, N.Y. (NEWS10) - We remained mostly cloudy to end the weekend, but we did stay dry and seasonably "mild" with highs in the upper 40s. Rain and rain showers move in overnight tonight with a compact little system that will sweep a cold front through Monday morning that will begin to usher in much cooler air for Monday afternoon and into Tuesday.

Much of the rain will be east of the Hudson Valley by daybreak on Monday, we may even see some breaks of sunshine to start the day north and west of Albany.

However, there are two fronts we are tracking for Monday. The first of which will be fairly early on Monday. The second will move through by mid-morning and this will hold temperatures steady through noon before dropping temperatures become likely during the second part of the day.

We do remain mostly dry behind this boundary as there is not a whole lot of moisture associated with the secondary cold front. However, lake effect snow will wake up off Lake Ontario through the afternoon and evening and a few of these snow showers will likely make it into the Adirondacks and perhaps portions of the Mohawk Valley.

A clear and relatively calm night Monday into Tuesday will lead to a pretty chilly start to Tuesday morning. Most will likely fall into the low to mid-20s by the time you wake up Tuesday morning. Temperatures will be held in the 30s for most Tuesday afternoons with a few holding in the upper 20s, mainly in the Adirondacks.

The lake effect connection will be broken by Tuesday, so it will be likely that skies turn partly sunny, however, the breeze will still be around, so it will feel much cooler than the temperatures you see above. Clear skies and calm winds Tuesday night will lead to likely our coldest night of the season so far with many falling into the teens.

A warm front will be moving through during the day on Wednesday so that will turn skies partly sunny, however, it will allow temperatures to warm back into the low 40s. Thanksgiving still looking quiet with mostly cloudy skies and temperatures in the mid-40s. Post-Thanksgiving things look to turn a bit active and chilly once again. Expecting a rain to potentially mountain snow event Friday into Saturday. There are timing differences in the global models for this system and dependent upon how fast the system is and how quick the cold air moves in will determine what we all see, stay tuned on that. However, what will be certain is another push of colder air is likely for next weekend and into the last few days of November with the chance for snow showers with the colder air. Enjoy the week, Happy Thanksgiving, and stay warm! -Rob

Be careful what you wish for – Revel Barker

How Loss To Jazz Showed Celtics Potential Of Their Versatility