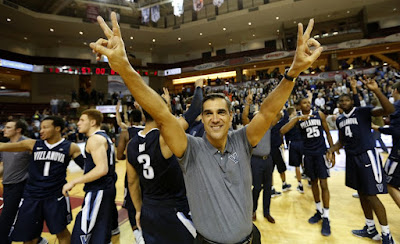 Jay Wright at the 2016 Charleston Classic; he won MTEs in all 5 surveyed seasons

Tonight Marquette will take on St. Bonaventure in the championship game of their multi-team event (MTE), the Charleston Classic. While this young Golden Eagles squad has already given fans more excitement in the first two weeks of the season than most expected for the entire year, a victory over the Bonnies could go a long way toward punching Marquette's ticket to the NCAA Tournament come Selection Sunday.

While it might seem silly to think about NCAA bids in November, non-conference is the only time leagues can establish themselves against other leagues, which directly determines how many bids leagues earn in March. There is no time of the year more important to determining the number of bids a league will earn than November and December, and with the shortening of non-conference schedules as leagues move to 20-game schedules, each game becomes that much more important.

I looked at the postseason destinations of the champions of 17 different MTEs over the past five full NCAA seasons. I excluded 2019-20 due to COVID cancelling the tournament and 2020-21 due to the irregularity of MTEs. I also looked at the number of runners-up that made it to the subsequent NCAA Tournament. Not surprisingly, winning is better. Here's the breakdown:

This included going through 85 separate brackets. MTE champs went to the NCAA Tournament 70.6% of the time and earned a postseason bid (NCAA or NIT) 88.2% of the time. Runners-up went to the NCAA just 44.7% of the time. Based on the numbers, the winner between Marquette and St. Bonaventure will be 25.9% more likely to earn a bid on Selection Sunday.

It's certainly possible for one or both teams to miss. That happened in 2015 when Marquette beat Arizona State to win the Legends Classic but both teams were left out of the NCAA and NIT fields. But numerically, when you beat 2-3 quality opponents over the stretch of a few days, it's a significant resume boost that greatly enhances your chances of playing longer in March, and more often than not in the Big Dance. In addition, since Marquette's 2001 Great Alaska Shootout win, that Legends Classic is the only time Marquette won an MTE and failed to punch their NCAA dance card, earning bids in 2002, 2006, 2007, and 2012.

So if you need an extra reason to cheer for Marquette tonight, remember that even in mid-November, an NCAA Tournament bid may very well be on the line. 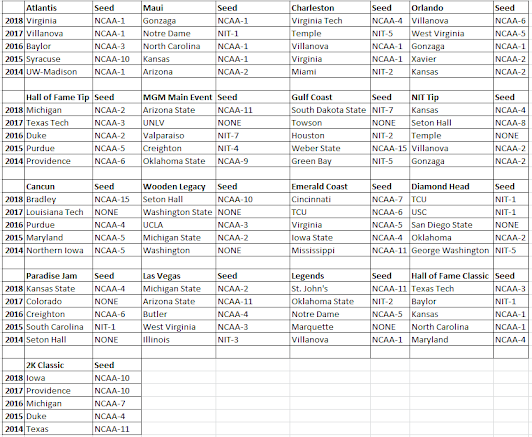