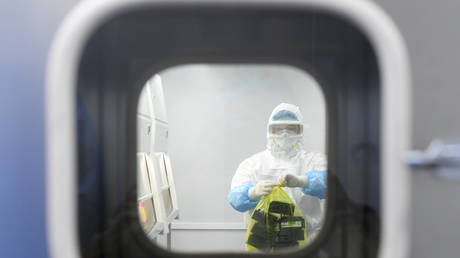 An American nonprofit behind the US-funded bat virus research in China has denied ever sending virus samples from Laos – a place where SARS-CoV-2 closest natural relative was found – to Wuhan in response to fresh allegations.

“No work was ever conducted in Laos as a part of this collaborative research project,” EcoHealth Alliance – a group that conducted experiments on coronaviruses while receiving funding from the National Institutes of Health (NIH) – said in a series of tweets on Sunday, responding to media reports alleging that the group might have transported a potentially dangerous virus from Laos to the laboratory in Wuhan.

However, we considered it a higher priority to continue our focus on China, and no work was ever conducted in Laos as a part of this collaborative research project.

The group’s name surfaced in October when the NIH principal deputy director, Lawrence Tabak, revealed EcoHealth Alliance did experiment on the viruses with the agency’s financial help. At that time, White House Medical Advisor Dr. Anthony Fauci stated that the viruses studied as part of the project “were distant enough molecularly that no matter what you did to them, they could never, ever become SARS-CoV-2.”

EcoHealth has come under renewed scrutiny after its emails, obtained through a Freedom of Information request, appeared to suggest that the group was discussing the prospect of collecting viral samples from bats in Laos and sending them to the Wuhan Institute of Virology. The emails were initially obtained by the White Coat Waste Project and sparked a flurry of reports over the weekend, including in the Spectator by British science writer Matt Ridley.

The emails shared between EcoHealth Alliance and its US government funders reportedly reveal that the scientists discussed collecting viral samples from bats in eight countries, including in Laos, between 2016 and 2019, and toyed with the idea of transporting them to Wuhan, ostensibly, to avoid red tape. One email from 2016 cited by the Spectator reportedly reads: “All samples collected would be tested at the Wuhan Institute of Virology.”

Laos is the birthplace of at least one virus that seems to be very close to SARS-Cov-2. A bat viral strain called Banal-52 discovered in Laos in September shares 96.8 percent of its genome with the virus behind the Covid-19 pandemic

On Sunday, EcoHealth Alliance claimed that the emails cited by Ridley “do not show...that we were sampling bats in Laos and sending the results to Wuhan.”

The group acknowledged, however, that it requested NIH permission to work in Southeast Asian countries, including in Laos, and that this permission was granted.

However, the nonprofit claimed it ended focusing on China instead.

The response failed to satisfy Ridley, who is also a co-author of a book on Covid's origin, who demanded “evidence” proving that  his report was not “fully accurate.”

If you're going to tweet accusing me of inaccuracy, can you please engage with this evidence that you were not being fully accurate?

Those of us interested in finding how the pandemic started would like to get answers to reasonable questions. https://t.co/yhPZcXBWmq