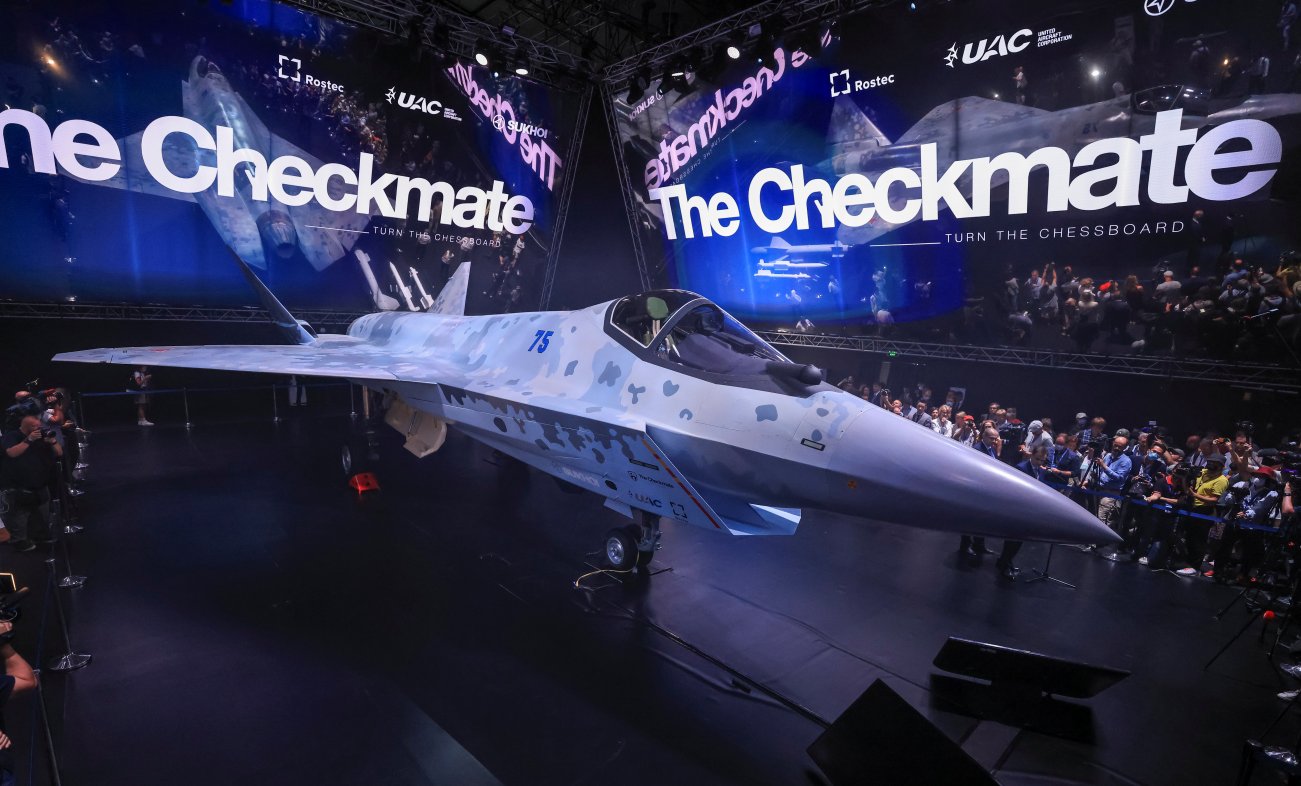 The Su-75 Checkmate is a single-engine, multirole light fifth-generation stealth fighter jet, unveiled during the MAKS-2021 airshow in July.

Russian defense giant Rostec published a video on Monday promoting the Checkmate fighter. “Real games are never honest,” begins the two-minute clip. “Not everyone follows the rules.” The video then cuts away from the chess iconography that has been central to the plane’s branding and marketing to show digital renders of the Checkmate fighter in action. The video clip shows a Checkmate aircraft zipping past several different models of stationary U.S. aircraft, literally leaving them in the dust. The video depicts the fighter performing air-to-air as well as air-to-ground operations, stressing the operational flexibility afforded by Checkmate’s reportedly large armament suite. At one point, the video briefly showed what appears to be a Checkmate fighter without a cockpit, captured in this still image, suggesting that Rostec is teasing an unmanned version of the plane.

The video is part of Rostec’s renewed marketing blitz, seemingly intended to coincide with the Checkmate fighter’s recent debut at the 2021 edition of the Dubai Airshow. The video was preceded by a shorter clip teasing a Checkmate-branded fragrance, made from “original samples of the aircraft’s metal alloy, glass and leather trim” and “combined it with light shades of juniper, patchouli and oak moss.”

The Su-75 Checkmate is a single-engine, multirole light fifth-generation stealth fighter jet, unveiled during the MAKS-2021 airshow in July. Shortly following Checkmate’s reveal, Anastasia Kravchenko, a spokeswoman for Rostec subsidiary Sukhoi, told reporters that an unmanned version of the plane is under development.

“This is the very same principle of open architecture that allows us to create both unmanned as well as manned versions of the same plane,” Kravchenko said. Manned and unmanned Checkmate fighters will reportedly be able to operate seamlessly within the same squadron. It is unknown if the unmanned Checkmate version will support the same payload, weapons configurations, and other features as its manned counterpart. It is also unclear to what extent the plane will be able to function completely autonomously, as opposed to requiring some degree of continuous input from a remote operator. Rostec has not revealed the unmanned variant’s price, which-- given the complexities involved in researching, developing, and producing unmanned aircraft technology-- is likely to be higher than the baseline manned version’s $25-30 million price tag.

Earlier this month, Russian state news outlet TASS published a digitally rendered photo of an unmanned Checkmate fighter flying alongside the manned version of the plane. Rostec CEO Sergey Chemezov confirmed on the sidelines of the Dubai Airshow this week that the fighter “may be converted into a UAV,” adding that there “is great [market] interest in UAV’s at the moment.”

37 corporate gifts your coworkers and employees will actually love, from wine flights to custom tote bags