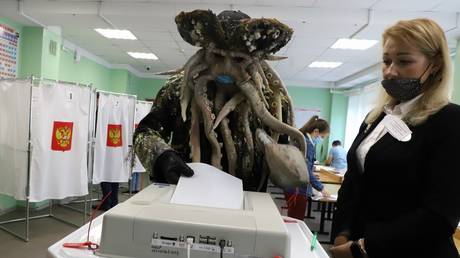 An election is a serious event, but some in Russia have decided to lighten the mood at polling stations, this weekend, by wearing the most ridiculous of costumes. Of course, no matter how you’re dressed your vote still counts.

According to the Central Election Commission, over 40% of the population had already cast their ballots, by Sunday afternoon, in the country's parliamentary elections and a number of them looked really memorable while doing so.

One voter in the Ryazan Region in central Russia apparently did some deep thinking before going to the polling station – that might be the reason why he arrived sporting a diving suit with a mask and flippers.

There was more fun in the same region as members of a local reenactment club cast their ballots while being protected by full medieval armor. Thankfully, they decided to leave their swords and shields at home.

A man in St. Petersburg was filmed wearing a massive costume of a ballot sheet, which was obviously too big to fit into a ballot box. He danced and chanted some songs and reportedly ended up being detained by the police.

A guy in a Donald Trump mask, a dark blue suit and a red tie was spotted ‘meddling’ with the Russian electoral process in the capital, Moscow.

Many voters opted to cosplay famous pop culture characters, with cursed tentacle-faced pirate captain Davy Jones from ‘The Pirates of the Caribbean’ making an appearance in Kamchatka in Russia’s Far East. He really struggled holding a ballot with his claws, but was eventually able to fulfil his civic duty and called upon others to come to the polling stations too. The likes of Scandinavian trickster god Loki from the Marvel universe and Marty, the zebra from the ‘Madagascar’ animated movies, were also spotted.

The New Year is still several months away, but a couple in the resort city of Zheleznovodsk in the south of the country cast their votes dressed as Santa Claus’s Russian counterpart Father Frost and his granddaughter, the Snow Maiden.

Some animal-loving voters took their pets with them to the polling stations, apparently seeking moral support. In Moscow, a raccoon stole the show after escaping from his owner and paralyzing the voting process for at least seven minutes.

In Russia’s eastern Altai Region, the locals used camels as a means of transportation to get to the polling station.