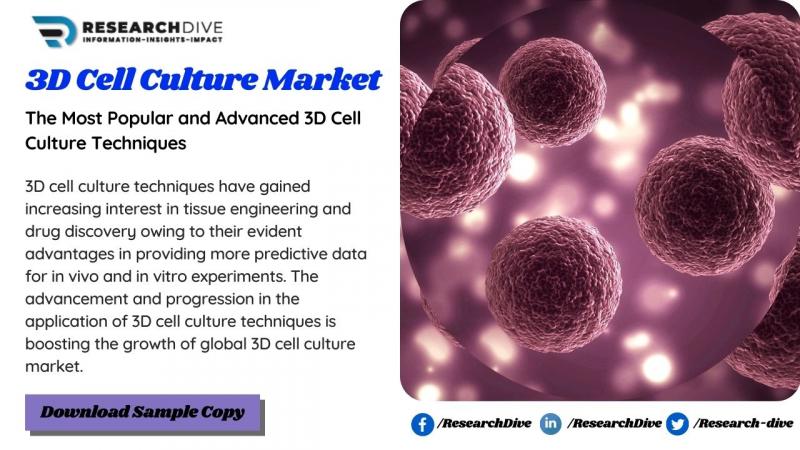 According to a study of Research Dive, global 3D Cell Culture market forecast shall cross $12,638.8 million by 2026, growing at a CAGR of 29.4 during forecast period.

With new advances, 3D composite scaffolds have many versatile properties. It will be tremendously useful to develop treatments for nerve disorders and spinal cord injury (SCI) by taking help of cell transplantation methodologies and biomaterials. The most remarkable advantage of 3D cell culture is, their properties can be easily adapted by modifying the structure and composition. These key factors of 3D cell culture are projected to create enormous opportunities for the growth of 3D cell culture industry.

Based on applications, the market is segmented into Stem Cell research, drug discovery, cancer research, and regenerative medicine. 3D cell culture market size for cancer research will generate a revenue of $4,057.1 million by 2026, growing at a CAGR of 28.5% throughout the forecast period; this is majorly due to various types of cancers such as breast cancer, lung cancer and others being dominant among the population. Cancer has a pervasive prevalence across the globe, which has led to rise in demand for cancer research, which is further attributed to boost the demand for 3D cell culture market. 3D cell culture market for regenerative medicine will register a revenue of $3,690.5 million by 2026, growing at a CAGR of 30.1%. Many developed and developing countries such as Japan is focusing more on contract manufacturing tie-ups, and continues to be a lucrative place for biotech ventures to do business. Japan is the world leader in regenerative medical products; these key strategies of the government are anticipated to spur the growth of 3D cell culture market.

3D cell culture market for biotechnology & pharmaceutical companies will register a revenue of $5,184.4 million by 2026, growing at a CAGR of 28.9% during the forecast period; this is majorly due to huge developments in the laboratory, technology and operations. Furthermore, rising pressure on sales of established treatments, rapid growth of cell therapies and focus on advanced manufacturing and technologies are the factors expected to grow the market.

Heavy investments in research & development, high healthcare expenditure, and extensively increasing number of cancer cases are considered to be one of the driving factors that are booming the growth of North American market.

3D Cell Culture market share for Asia-Pacific region is expected to rise at a CAGR of 30.7% by generating a revenue of $3,020.7 million by 2026.  The market growth in the region is increasing drug discovery initiatives among pharmaceuticals and biotechnology companies in the region. Major economies such as India, Singapore, Japan and South Korea are emphasizing more on public sector openness to partnership with established companies. For instance, leading market players such as Bayer, GlaxoSmithKline and AstraZeneca are collaborating with Singapore partners across drug discovery.

Speak to our Expertise before buying Report@ https://www.researchdive.com/connect-to-analyst/73

Players using updated technologies for their 3D Cell Culture will have good probability of having success in the rapidly blooming market. For example, Lonza has innovated the RAFT 3D Culture System that produces hepatocytes with increased stability and stronger cytochrome responses.