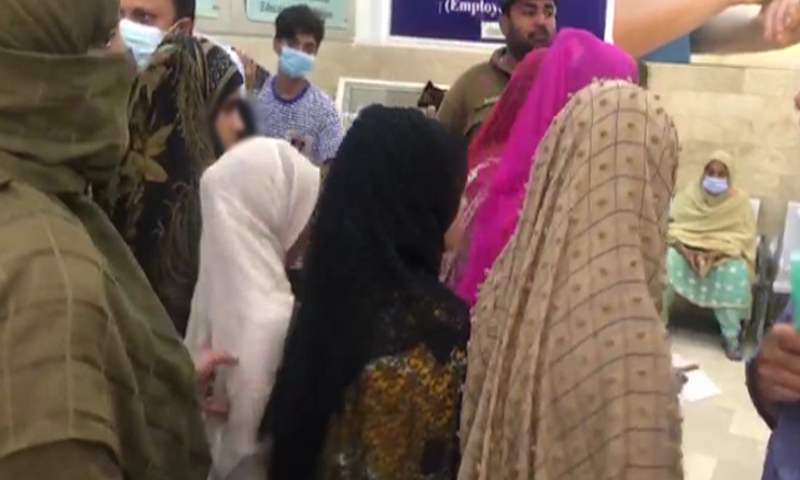 A district court in Lahore remanded five men, allegedly involved in the kidnapping of four girls from Lahore's Hanjarwal area on July 30, to police custody. The same court also remanded two women, who are believed to be part of the gang, to judicial custody.

Hanjarwal police produced the suspects in the court of Judicial Magistrate Noman Nasir. The girls were also presented in court.

Police requested the court to grant 14-day physical remand for the suspects' interrogation and to investigate the gang's modus operandi. The court remanded the five men for four days to police custody and sent the two women to jail on judicial remand for 14 days.

The judge also ordered medical examinations of the four girls and fixed tomorrow (Friday) for recording their statement. He said the girls would record their statement in the suspects' presence and instructed the police to present them in court tomorrow.

The report from the interrogation so far was also submitted to the court. It states that one suspect, Kasim, had allegedly kidnapped the girls from Lahore and brought them to Sahiwal where they were received by Naeem Shehzad.

Naeem Shehzad taught dancing to girls and sent them to dance parties, according to the report.

Another suspect, Shehzad, was involved in prostitution along with his wife and already had a case registered against him for the crime in Sahiwal, the report said. It added that he owned one house in Lahore and three in Sahiwal.

The report said that the wife of another suspect, Asif, ran her own beauty parlour and was also engaged in prostitution, providing the services of girls through the parlour.

Hanjarwal police, on August 2, had registered a case of kidnapping of the four girls, who had allegedly left their house to travel on the Orange Line Metro Train on July 30, but didn’t return.

Providing a timeline of events, he said the girls had ventured out on July 30 at around midnight, angry with their parents. They boarded the Orange Line Metro Train and got off at the Gulshan-e-Ravi stop.

Their neighbour, Omar Farooq, tried to take them back home but he had to return and left the girls. A Qingqi driver and his companion then met them and took them to various places, saying that they would drop them off at G1 market where one of the girls worked.

"They did not do this and at around 3am, the girls got scared, raised some noise and were dropped off near the Pindi stop close to Quaid-e-Azam industrial estate."

Kasim then met them and took them on his rickshaw to his home in Bagriyan Chowk. "He broke the mobile phone SIM [card] in their use, maybe because he was aware that the police could track them through it," the DIG said.

He added that Kasim kept them at his home for one night and negotiated with his friend, Shehzad, to sell them. The next day, Shehzad took them in his car to an orphanage near his home.

Between August 1 and 2 around midnight, the two suspects ventured out to take the girls to Sahiwal. Three girls went with Kasim and his wife where they were handed over to Naeem Shehzad, who then took them to Asif and his wife's, Zainab, house.

The remaining girl was given to Shehzad in exchange for Rs100,000 and he took her to Sahiwal with his wife.

The DIG said the Lahore police had made a lot of effort in the case and were consistently engaged in solving it because "it was an important matter".

He said safe city cameras and modern technology were used to trace the Qingqi and auto-rickshaws in Lahore, adding that a number of raids were made in the process.

"Sahiwal police raided suspect Shehzad's quhba khana (brothel) on August 3 from where five girls were found," he said, adding that a case was registered on the incident in Sahiwal.

Due to the raids and the media's "focus and reporting", the suspects called on 15 through an unknown number after which Sahiwal police recovered the girls and handed them over to the Lahore police.

The DIG said the Lahore police was interrogating the suspects, the crime scenes had been visited and evidence collected. The girls, he said, were willingly handed over to the Punjab child protection bureau.

"This was an important case and I'm happy that God gave us the opportunity that we could recover these girls safely."

Responding to a question, he said the medical report would clarify if the girls were subjected to violence or sexual assault.

Complainant Irfan Ali of Mohalla Nambardaran had stated in the first information report that his daughters — Anam, 10, and Kinza, 11, along with the daughters of his neighbour Akram — Pinki, 14, and Aysha, 8 — might have been kidnapped by some unknown persons.

A joint team of Sahiwal district police and the Crime Investigation Agency had subsequently recovered the girls in a raid on a house in Sahiwal yesterday (Wednesday).

A police official from Lahore said Anam and her sister Kinza told police that they had left their home because of the harsh behaviour and taunts of their drug addict father over petty domestic issues, while their neighbour’s daughters accompanied them to have fun.

What is Kelly Osbourne’s net worth?