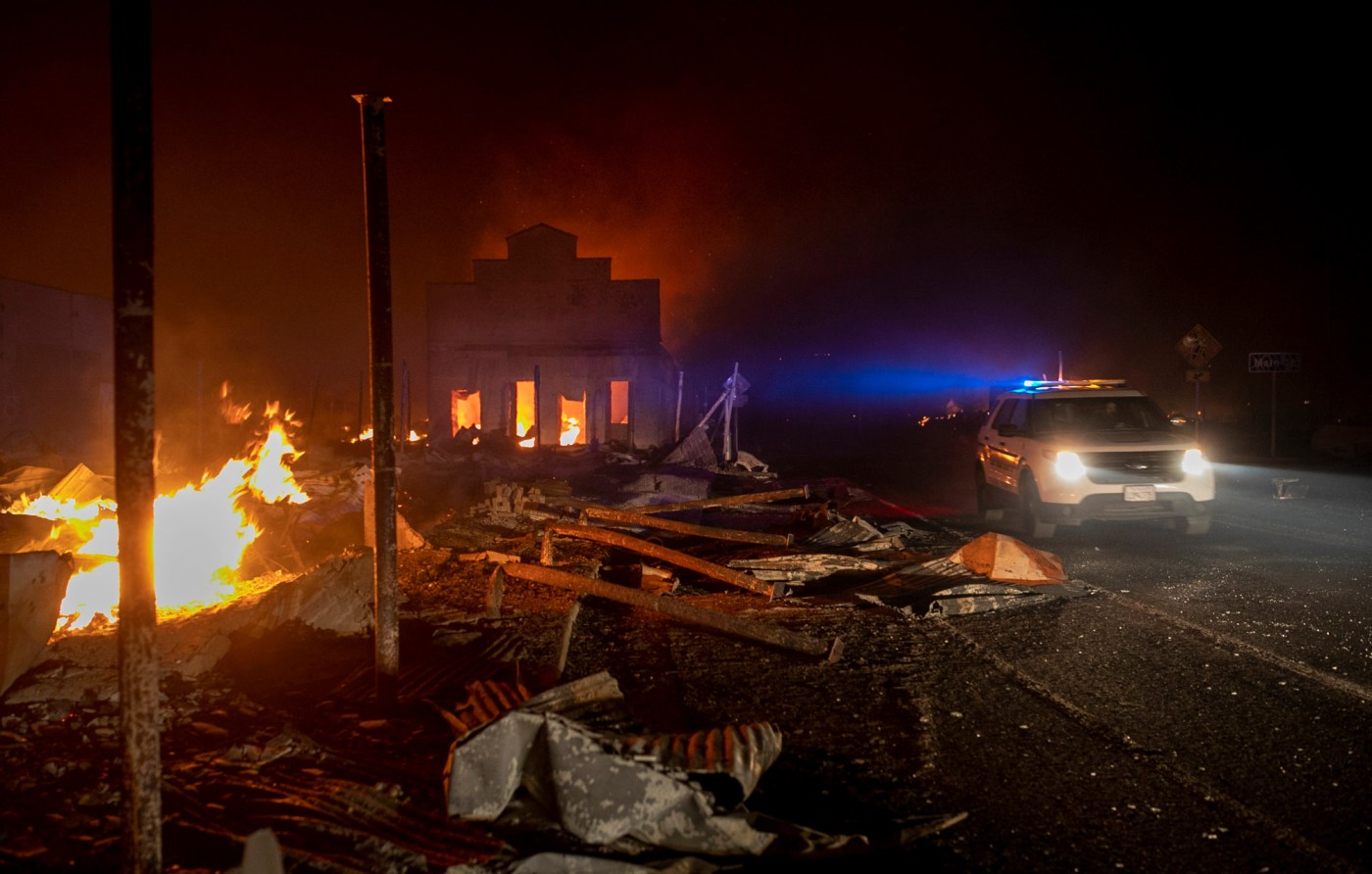 GREENVILLE — They didn’t expect Greenville to burn so fast.

All day, crews fighting California’s largest wildfire of the season had waited for winds to pick up, amid a red flag warning that forecasters predicted could drive flames along the northern and northeastern sides of the vast Dixie Fire. The town of Greenville — nestled southeast of Lake Almanor and home to about 1,100 people  — had so far been spared.

But then, late Wednesday, the winds came. By midnight, the mountain town was ravaged, in what was likely the single most destructive night since the wildfire broke out in Butte County three weeks ago.

“This is devastating,” said Fire Captain Jeremy Day, whose crew battled the flames in and around Greenville overnight. “I just stood there for a moment and let it set in. They lost their entire community.”

Highway 89 was a hellish strip Wednesday night as homes burned to their skeletons, trees choked with flames and businesses were charred beyond recognition. A chimney rose up where an inn used to stand; near the town’s Main Street, a streetlight had melted sideways like a candy cane.

The highway was almost entirely deserted as some fire crews were relieved and others lingered on to protect the town’s remaining buildings near downtown. A lone Plumas Sheriff’s Office deputy shone a flashlight up into the trees off of Main Street, illuminating a sagging utility pole.

“It happened quickly,” the deputy said, gesturing toward the town. “A couple hours, and …”

For Day and his San Diego County-based crew, the fire fight in Greenville was the final stop after two weeks working to contain the Dixie Fire along its eastern front.

The original assignment Wednesday, he said, was to help form a contingency crew in case intense winds unexpectedly sent the fire toward the town. All day, the fire lingered atop the hills behind Greenville as crews prepared for structure defense down below, tying in the line and forming dozer tracks.

But around 3:30 p.m., swirling tunnels of smoke started billowing above the fire as the winds picked up. And then the winds reversed, sending the flames downhill toward the town — fast.

As the fire marched forward, crews were forced away from the town center. Then they retreated again. And again. Within an hour, they had been set back about 12 miles south all the way to the town of Crescent Mills.

“When it gets that big, we just gotta get out of the way. There’s no amount of water that can stop it,” Day said.

The leveling of Greenville’s downtown marks a significant shift in the Dixie Fire’s reach into populated communities: The fire had officially destroyed 67 structures as of Wednesday morning, despite its massive reach across nearly 280,000 acres. Officials have not yet released a total damage assessment for Greenville.

In Greenville, buildings including a grocery store, an elementary school and a Dollar General remained untouched as of late Wednesday night. Day’s crew planned to spend their last hours on the job defending what was left in the area.

“This doesn’t happen in every fire,” he said. “But now there’s Greenville, there’s Paradise … it’s been a long three years.”

A popular RV maker has unveiled a more than $400,000 tiny home in a 'box' built on a Mercedes-Benz Sprinter - see inside the Asteroid of Happiness