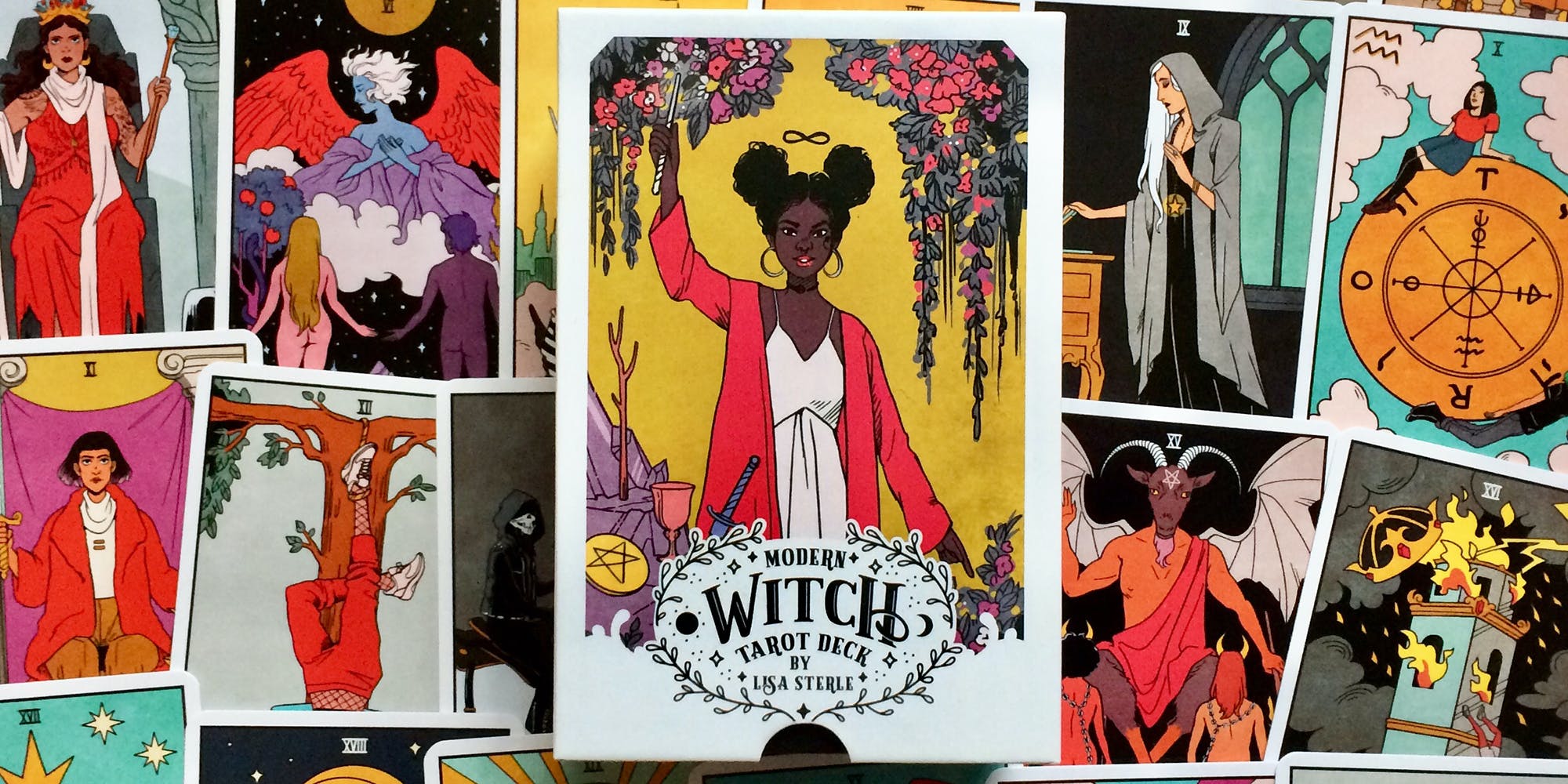 For centuries tarot cards have helped people guide their lives, but when it comes to finding the best tarot deck, you’re on your own. At least, until now.

It doesn’t matter if you’re looking for a simple three-card pull or a more elaborate layout. Making sure you find the right deck for your needs, energy, and life comes first.

You don’t need to worry about getting lost along the way. We’ve scoured the net for the best deals, decks, and books to help you on your journey. From esoteric classic decks to pop culture-inspired works of art, we’ve taken everyone’s needs into account.

Here are the best tarot decks around, no matter what you’re looking for.

The 15 best tarot decks and books to read your future

They say the classics never go out of style and the Rider-Waite-Smith tarot deck as been a popular choice for over 100 years. Originally published in 1909, this deck features art from Pamela Colman Smith and a booklet from A.E. White.

Beyond its historical importance to the spread of tarot, this deck is important because of Colman Smith. Pamela Colman Smith was the daughter of a Jamaican merchant from Brooklyn and an English mother.

While her racial identity has largely been whitewashed from history, it’s important to note that her deck has been massively influential. The minor arcana as millions of people think of them today are the work of a Black woman from 1909.

Her stunning art removed many of the traditional Christian themes from tarot decks of the day, replacing the “Papess” with “High Priestess” for example.

You can gaze upon this historical wonder for yourself, and use it to read your cards as well, for just $13.99. If you’d like to know more about Colman Smith, you can read more about her history here.

Our Tarot: A Guidebook and Deck Featuring Notable Women in History by Sarah Shipman - $32.11

Sarah Shipman’s majestic Our Tarot is more than just a deck and guidebook. This stunningly designed, lovingly researched tome is a full-color love letter to the power of women through history.

Starting in 1300 BCE and flowing through to the late 20th century, Our Tarot pays homage to the powerful women in history. From Frida Kahlo and Beatrix Potter to Zora Neale Hurston and Ida B. Wells, the collection is as powerful as it is intersectional.

Whether you’re collecting it as an art piece or looking for a tool for insight and divination, Shipman’s stunning art and soulful words will feel like a gift.

The Modern Witch Tarot by Lisa Sterle and Vita Ayala - $15.96

Sometimes the baggage of classic tarot design is more of a distraction than a benefit. Lisa Sterle’s Modern Witch Tarot Deck is a contemporary update of the classic Rider-Waite-Smith deck, adapting classic images to the modern world.

The Chariot features a riot grrrl on a motorcycle, The High Priestess a blogger in thigh-high boots with a laptop. Spanning a diverse range of body types and ethnicities, the Modern Witch tarot de-centers the whiteness of much modern magic. It helps that Sterle’s art is warm and beautiful.

Graphic designer and standup comedian Winslow Dumaine has built a fiercely loyal cult following thanks to the pitch dark nature of his art. His most beloved project is the mystical horror of The Tarot Restless.

Drawing inspiration from the video games like Dark Souls and Silent Hill, this deck is a hand-drawn Lovecraftian nightmare.

Featuring a full 78-card deck, a 12-card Zodiac Retrograde expansion, the 10-card Oracle Inimical (The Exalted and Exterminated) expansion, and a 140+ page guide book, this extensive collection makes it one of the most extensive tarot collections on the list.

This is the third printing of this deck, so jump on it before it sells out again.

Tarot of the Devince: Inspired by Deities, Folklore, and Fairy Tales from Around the World by Yoshi Yoshitani - $17.99

Having a deck that’s connected to you personally is the most important foundation of reading tarot cards. Particularly for storytellers, connections to familiar stories can help connect people to the cards. That’s why the Tarot of the Devince speaks to us.

Illustrator Yoshi Yoshitani dove deep into the international world of fairy tales and folklore to develop this deck. Pulling stories from Danish (The Little Mermaid), Maori (The Legend of Hinemoa and Tutanekai), Japan (The Crane Wife), and beyond this is an international affair.

Beyond being a love letter to storytelling and myth, this complete deck is a gorgeous way to insert your love of stories into your readings.

The Field Tarot by Hannah by Hannah Elizabeth Fofana - $20.66

Hannah Elizabeth Fofana’s The Field Tarot is unlike almost any deck the lay reader might have encountered before. Gone are the familiar images and themes of the Rider-Waite-Smithe deck, leaving behind 78-cards of fresh interpretation.

Drawing from the theme of “the field” this deck draws its inspiration from the colors, warmth, life, and beauty of botanical nature. Using modern, yet grounded, interpretations of the major and minor arcana, The Field Tarot is as deep as you seek to make it.

Open to both simple intuitive readings and deeper study, this is a gentle deck for new and experienced readers alike.

Prism Oracle:  Tap into your Intuition with the Magic of Color by Nicole Pivirotto - $17.96

The connection between magic and color dates back to the earliest conversations about mysticism. We’re just surprised there aren’t more decks like Nicole Pivirotto’s Prism Oracle.

Drawing from color theory, magic, and psychology, this deck explores the boundaries of tarot. Each card is tied to unique states based on color - namely: creativity, reflection, and frustration.

This 45-card deck can be used for traditional tarot or advanced color-based readings. The true highlight of the deck is its stunning beauty, crossing sacred geometry and color theory into an otherworldly series of symbols.

The only catch is that we can’t recommend this deck for new users. This is one of the best tarot decks around for advanced readers, but it asks more of you than you may think.

Reading tarot can be deeply simple and intuitive or incredibly complex - that’s part of its beauty. But the best tarot decks are the ones that you feel a personal connection to.

The Pride Tarot is a 78-card deck featuring 45 artists from the LGBTQ+ community. Drawing from the classic Rider-Waite-Smith tarot, this beautiful deck brings heroes and icons from LGBTQ history into the tarot.

A portion of each deck sold also goes towards LGBTQ charities and the 192-page illustrated guidebook dives deep into the history. Discover the artists who drew each card, the history behind their subjects, and how to do a special Pride specific reading with the deck.

For some it may seem pandering, but for people looking for a deeper connection to their deck, it’s a gift.

9) Best way to build your own Tarot deck

You can always buy a tarot deck, but what about making your own? This set gives you enough blank cards to design, draw, paint, or stamp your own personal tarot experience two times over.

The internet is full of explainers on what each card means, but no one knows what your deck would look like but you. Grab your art supplies and look within. There could be a tarot waiting inside your heart.

This is also one of the best tarot decks to gift a friend - after you've done the decorating of course.

The Hermetic Tarot by Godfrey Dowson and Stuart R. Kaplan - $15.53

If you’ve never studied the Hermetic Order of the Golden Dawn, you might be missing out on magic history. Formed in the late 1800s, the Hermetic Order was a secret society that drew from a wide range of occult traditions to create their own form of magic.

Those traditions included tarot. The deck, lovingly designed by Godfrey Dowson, is an artistic masterpiece and esoteric road map all in one.

Drawing from geometry, kabbala, numerology, and angelic elements, the deck may begin just for readings, but will soon evolve into a quest to learn all of its secrets.

Its booklet also includes instructions for a special ten-card Celtic Cross layout, along with a chart explaining many of the elemental and astrological symbols found within.

You’ll notice many of the decks on this list draw from the same sources of inspiration. We think that’s part of why the wildly original Wild Unknown Tarot has experienced just explosive popularity in recent years.

Pulling from the natural world and interpreting it with gorgeous psychedelic art, The Wild Unknown Tarot is unlike other decks. This deck is great for separating expectations of the cards from what they’re trying to tell us.

If you’re looking for a deck free of baggage and history, this is one of the best tarot decks for a breathtaking fresh start. Though you may want to also keep a more traditional deck on hand for when you need cards that are less open to interpretation.

How to Learn Tarot: A Guided Tarot Journal with Intuitive Prompts and Spreads by Jess Carlson - $9.93

Every deck includes a basic instruction manual, but for new explorers in the world of tarot, a little guidance is invaluable. Jess Carlson’s How to Learn Tarot is a beautiful entry point for new readers.

From a journal for logging your readings to tips for spreads and prompts that give you a deeper understanding of each card, this journal is everything you need to get started.

Everything, that is, except a deck. Thankfully we’ve given you plenty of options above.

After the worldwide success of her Modern Witch Tarot deck, Lisa Sterle poured her passion and inspiration into this journal project. This journal gives more experienced readers a place to record their readings, gain a deeper understanding of cards, and track their journey.

While it lacks some of the essential guidance offered for newbies that Carlson’s book includes, we love the warmth of this journal. It's simplicity is part of its charm, and not everyone needs those beginner elements.

If you’ve fallen in love with the Modern Witch Tarot, this book is a logical next step.

Understanding Tarot: A Beginner’s Guide to Meaning and Prediction by Charles Adkins - $13.99

A journal can help you during the beginning of your journey, but given we’re talking about communicating with the spirit world, read a book before you begin.

Giving someone a bad reading can be spiritually and personally dangerous, especially when the reading is on yourself. Never be left wondering about an interpretation.

Give yourself the foundations you need to build a successful future. Or at least know how to see one in your cards.

While Adkins's book is our favorite for learning the basics of tarot, Stefanie Caponi’s Guided Tarot for Seamless Readings is essential. Beyond the basic explanations of card meanings, Caponi digs into the importance of intuition and interpretation.

From easy steps for preparing yourself for a reading to guided exercises to strengthen your natural intuition while reading, this book is a fully illustrated training manual.

We particularly love the quick reference chart, which gives you easy meanings for each card, even in inverted states. When you’re communicating with the beyond, study up.

With Caponi in your corner, your readings will take on an entirely new dimension of depth.

The post The best tarot decks and books to read your future appeared first on The Daily Dot.