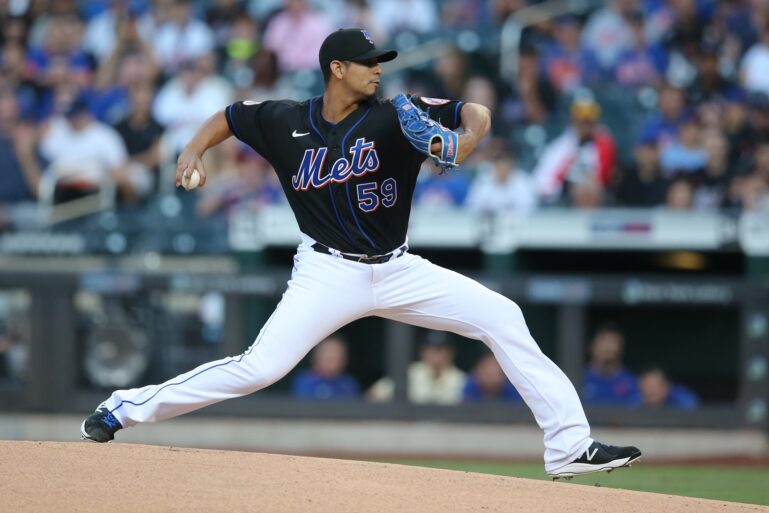 Carlos Carrasco lasted just 4 1/3 innings in his second start as a New York Met, but had an overall effective evening in Wednesday’s 5-3 Mets win.

The first two innings could not have gone better for Carrasco – literally. He retired all six batters in the first two frames, striking out two batters in the second inning. His streak of perfection lasted 2 and 1/3 innings, before Alex Jackson‘s double in the third inning.

After getting out of the third with no further damage, Carrasco also allowed a double to the second batter of the fourth inning. This time, the hit came off the bat of Jesus Aguilar. However, after a strikeout and a groundout, Carrasco was able to escape the mini-jam once again.

The fifth inning would ultimately be Carrasco’s final inning, and it was the first inning that he faced real trouble. After allowing singles to Jorge Alfaro and Bryan De La Cruz (the latter of which was a softly hit ball to the pitcher’s mound) to open up the fifth, Carrasco struck out Alex Jackson following a mound visit.

Looking to strand another base runner in scoring position, the Marlins offense got the best of Carrasco this time around. Joe Panik singled to center, scoring Alfaro and advancing De La Cruz to third.

Three singles in the inning was enough for Mets manager Luis Rojas. He pulled Carrasco after 4 1/3 innings. Although Carrasco left the ballgame having allowed just one earned run, he would ultimately be charged with two earned runs. When Aaron Loup entered the game, he got Jazz Chisholm to groundout on a possible double play ball to shortstop. However, the ball was hit too softly to complete the double play. The only out was retiring Panik at second base, with De La Cruz scoring and Chisholm getting to first safely.

While Carrasco did not pitch too deep into this contest, he provided enough length to not put too much stress on the bullpen. All five of his strikeouts occurred on swing and misses too, besting his mark of three swinging K’s from his previous start. He threw 62 pitches on the night with 43 of them coming for strikes.

His strikeout pitch of the night was his slider, it had a 40% whiff rate and he threw the pitch 47% of the time. Another key note was the uptick in velocity compared to his first start. His sinker up 0.8 mph and his four-seamer up 1.0 mph in his second big league start of the 2021 season.

Carrasco is next scheduled to pitch on Tuesday against the Nationals. With Monday’s off-day, Carrasco will take the mound on five-days rest.

Obiano once said Ojukwu no longer relevant to APGA – Bianca