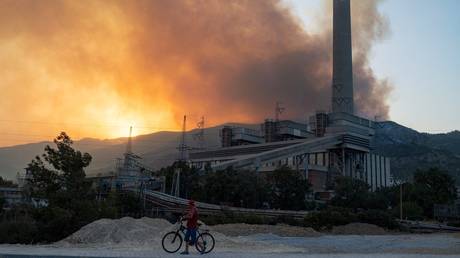 Emergency services in Mugla, Turkey have brought under control a blazing wildfire that threatened the coal-fired Kemerkoy power plant after footage showed flames burning around the facility, sparking an evacuation.

Firefighters battled the blaze overnight, evacuating local residents and workers at the plant via a ship, as the flames ripped through the grounds of the facility.

“The fire in thermal power plant yard has been put out. There were no explosions in the plant and no chemicals were spread,” the Turkish municipality of Mugla announced in a statement.

Similarly, Fahrettin Altun, the communications director for Turkish President Recep Tayyip Erdogan, confirmed no units at the power plant had been damaged.

The threat to the power plant came as Turkey suffers from the worst wildfires it has seen, which have destroyed tens of thousands of hectares of woodland, risking swathes of residential areas and forcing thousands of citizens and tourists to escape the blazes.

In the past nine days, the southwest of Turkey has recorded more than 150 fires that have spread rapidly due to high temperatures and strong winds, with videos showing flames rising above woodland and emergency services using aircraft to dump water on affected areas.

⭕️????????#Turkey: Some sources claim that the thermal power plant in #Kemerkoy, was destroyed by the fire.
???? This is extremely dangerous for the ecosystem of the area, including ????????#Greece due to the fact that The plant operates using lignite and fuel oil. pic.twitter.com/OlWGzx4YR8

Eight people have died in the Turkish fires and 27 individuals are being treated in medical facilities. Authorities have not confirmed the origin of the blazes but have stated that they are investigating whether arson is a possibility.

Elsewhere in the Mediterranean, Greece has been suffering from similar wildfires, forcing the evacuation of individuals on an island close to Athens, as a blaze burns near the historical site of the ancient Olympic Games in Peloponnese. Local media outlets in Greece described the situation in the country as a “nightmare with no end” after wildfires burned for a third straight day.

Bears vs. Browns — What to Watch 4