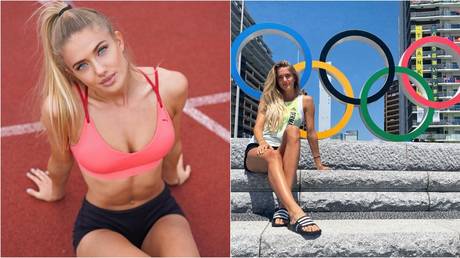 'World's sexiest athlete' Alica Schmidt will not feature at the 2020 Olympics after failing to qualify for the 4x400m women's race on Friday, after fans had questioned her contribution to the German track team in Tokyo.

Perhaps only Laurel Hubbard, the transgender weightlifter, was the only athlete to have a more anticipated arrival in Tokyo, but for very different reasons.

Leggy blonde runner Schmidt had been set to rid herself of her novelty act status after being named 'World's Sexiest Athlete' when she qualified for Tokyo 2020 as a Team Deutschland track member.

Schmidt had been benched for the mixed 4x400m relay in which the Germans were disqualified due to making contact with their Jamaican counterparts on the track but still stood a chance of making her bow in the women's 4x400m.

But it wasn't to be as Schmidt's time trials weren't quick enough to get a spot within the German quartet.

"I’ve been receiving so many sweet messages from you guys over the last few days. You all have been so anxious and excited for my debut in the 4x4 relay at the Olympics," Schmidt posted to her 2.3 million Instagram followers on Thursday.

"After an in practice race simulation I wasn’t able to secure my spot in the line up for the prelims.

"I'm so grateful for all of the love and support that I have been recieving on this journey. Now I can’t wait to cheer on my girls today and hope that we can make it into the olympic final!

"I couldn’t be more thankful for all the experiences I have already made during my time in Tokyo. I’ve been able to learn so many things and can’t wait where my athletic career will take me in the upcoming years

"I can’t thank every single one of you enough for your incredible support. Take care!"

Contrary to her post, not all messages Schmidt received were complimentary, as many began to suspect she had tagged along for a good old freeload, judging by the 22-year-old's TikTok content.

Some wondered is she had been taken to Japan to simply promote the Olympics with her looks, "Didn't realise being hot was a sport" one said, and another accused her of travelling to Tokyo for the free gifts given to athletes, rather than to compete.

Schmidt had also become somewhat famous for her fitness routines with Bundesliga club Borussia Dortmund, putting the players through their paces