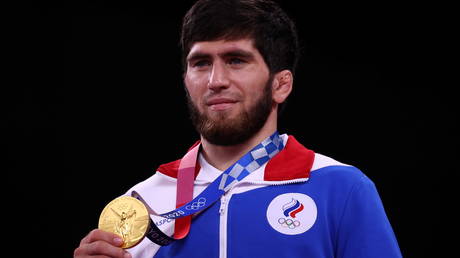 Zaur Uguev defeated India's Ravi Kumar Dahiya in the final of the men's freestyle wrestling 57kg category to capture another gold medal for the Russian Olympic Committee (ROC) team at the Tokyo 2020 Games.

The Dagestan native and two-time reigning world champion beat his foe, who captured India's second silver medal and fifth overall thus far, by a score of 7-4.

Uguev was given tough competition, and has achieved the highest honor in the athletics spectacle through a series of last-gasp wins.

Against the USA's Thomas Gilman, he won 5-4 with a nail-biting last-second takedown to meet Gulomjon Abdullaev in the quarterfinals.

At the Uzbek's expense, he then pulled off what was described by one wrestling expert as an "incredible inside trip" in the closing seconds by hooking Abdullaev's ankle, sinking his hips and pushing on his opponent's tricep with his left arm to drive Abudllaev's upper body over his legs.

Here is the incredible inside trip by Zaur Uguev ???????? in the closing seconds to win his quarterfinals match. Hooks at the ankle, sinks his hips & pushes on opp's tricep w/ left arm to help drive opp's upper body over his legs pic.twitter.com/M0apPM2RbF

To meet Dahiya in the last dance, Uguev was a lot more emphatic in seeing off Iran's Reza Atrinagharchi 8-3.

Like his compatriot Musa Evloev - the cousin of UFC featherweight Mosvar who captured gold in the 97kg category - he has now completed the impressive treble of double world championship titles in 2018 and 2019 followed by his gold in the Japanese capital today.

US House Committee to Consider Bill to Decriminalize Cannabis