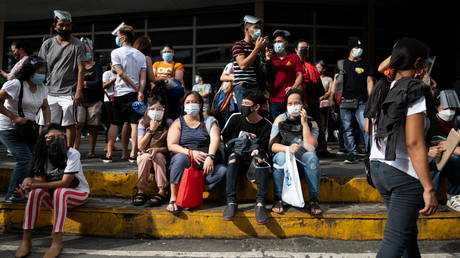 Thousands of people who flocked to vaccination centers in the Philippines capital area to get inoculated against Covid before the imminent lockdown of Metro Manila met with mayhem as locations suddenly stopped administering shots.

People poured into vaccine sites en masse across Manila on Thursday in a bid to get jabbed before lockdown takes effect on August 6. Due to the influx of people, the local government made the decision to order vaccination sites to cease inoculating the thousands of citizens that had turned up.

Videos that emerged on social media showed crowds of people flooding the streets to secure a coronavirus vaccine at a mall in Manila. Other footage showed people closely packed together inside the same shopping center without adhering to social distancing protocols.

Prayers to everyone who lined up at SM San Lazaro to get vaccinated but wasn’t able to get it. Ang lala grabe. It’s true that vaccine hesitancy is not the problem here anymore. pic.twitter.com/or9SfNIwiW

Footage from a car showed many people queued up on a bridge waiting to be jabbed.

The local government maintained that the decision to turn away thousands of people was to prevent coronavirus cases from increasing. A spokesperson for president Rodrigo Duterte, Harry Roque, echoed the sentiment of the local authorities in a media briefing, imploring “let’s not make vaccination a super-spreader”, and that it should be a life-saver, not “endanger lives”.

The urgency to get vaccinated comes as some 13 million citizens in greater Manila will be placed under its strictest level of lockdown on Friday, with the measures due to last until August 20. All citizens will be subject to a stay-at-home order, with dining establishments and public gatherings temporarily prohibited and a curfew in place.

According to data from August 1, over 11.7 million first doses of a coronavirus vaccine have been administered, while more than 9.1 million people out of the 111 million population are fully vaccinated.

Since the outbreak of the pandemic, the Philippines has recorded over 1.6 million infections, the second-highest figures in Southeast Asia, behind Indonesia. The country’s official death toll stands at 28,427.

What is missing white woman syndrome?